A few nights ago our good friend Bekah (in blue sweater) invited us all over to her house for her 21st birthday party. We are all old friends because almost everyone in the picture has been involved in our Bright Lights group here in Cedar Rapids, IA for the past 10 years, and has traveled together to help lead at multiple Bright Lights conference trips. We have lots of adventurous and unique memories! Serving the Lord together ignites some of the best times of fellowship. I’m so grateful for these lasting friendships.

It was late at night when my dad and I stopped at this gas station. (We were on our way home from the Bible Quizzing event.) We walked in and the only one we saw inside was the worker sweeping the floor.

As we were leaving, he was standing behind the counter. We greeted him again and I pulled a dinosaur pamphlet out of my purse.
“Here’s something for you to read,” I explained, “We don’t think we came from monkeys…”
He smiled and nodded.
“We think we were created, by God, for a reason. But often people only hear one side of the debate and public schools only teach evolution…” I said.
He commented and agreed.
“…So we are trying to teach the other side,” I said. “And, you know, there is a lot of evidence for design and a Creator. Dinosaurs are one of them,” I mentioned, glancing at the pamphlet I had just laid on his counter. “The Bible actually talks about dinosaurs and there’s evidence that they didn’t live so long ago—but that they lived during the same time as man,” I said.
“Really?” he exclaimed as he raised his eyebrows.
“Yeah, archeologists have actually found fossils of dinosaur bones with blood vessels still preserved in them—which shows us that they couldn’t have been millions of years old like some people say,” I said.

My dad joined the conversation and added, “And, you know, all over the world there are legends of dragons. And they all describe similar things. That’s because those were dinosaurs.”
That made sense to the cashier. He nodded in agreement.
We said a few more things and then left.
“I’m going to read this little booklet!” the cashier warmly told us as we walked out.

Note-
Question: When did this “witnessing encounter” begin? It didn’t begin when we gave him the tract. It began when we walked in and gave him a warm friendly greeting and that opened a door for us to easily converse with him again as we were leaving. It was a good reminder for me to purpose to be friendly everywhere I go.

Last weekend, my dad and I went up to Rochester, Minnesota for the 25th anniversary of the Bible Quizzing league in Rochester, MN. (Bible Quizzing was actually started by Youth For Christ in 1947 but we were celebrating the league that started in Rochester in 1984.) We both really enjoyed the weekend and saw a lot of old friends. 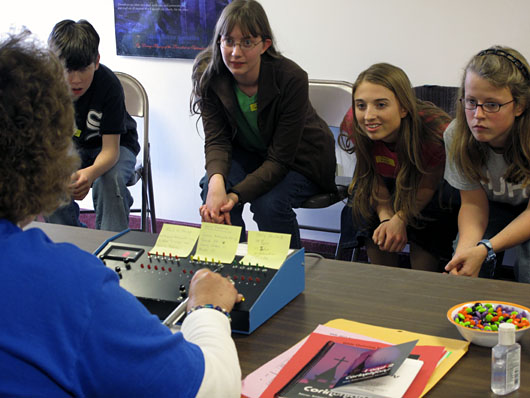 Looking back, we wouldn’t trade the time we’ve given to Bible quizzing for anything. It’s hard to adequately express our gratefulness for this program and for the way it helps young people memorize large portions of Scripture. 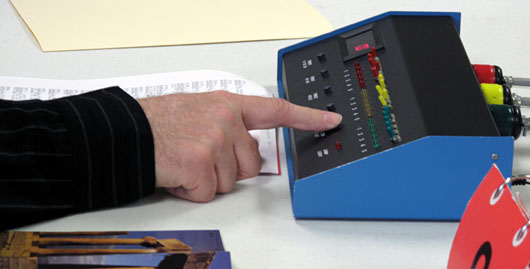 Here’s a glimpse of how it works: The “quiz master” uses this box to detect which quizzer jumps first. Each quizzer sits on a pad which triggers a light on the quiz master’s box when he or she jumps. Whoever stands up first gets to answer the question. The competition can get pretty intense, and often once you’ve tried it, you’re stuck–memorizing God’s Word and coming back year after year to quiz. 🙂 If you’d like to learn more about Bible quizzing, see www.wbqa.org

We want to express appreciation to each of you who were praying for the Leaders Training. It was a great week. Like any conference, it was tiring and had its stressful moments… but things went very well. Sarah mentioned that she could definitely tell people were praying for her. The Lord answered many specific requests. We had a sweet, encouraging, spiritually-minded group of young ladies who attended. And it sounds like quite a few more Bright Lights groups will be starting. 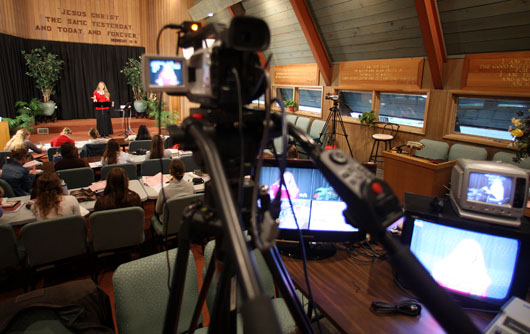 The sessions seemed to go well, and …. drum roll please… the video worked, too! 🙂 From everything we can tell, it seems like the recording went very well. Stephen was able to edit as we went, so there is very little “post work” that has to be done. There *is* a little editing to do because of a few minor mistakes, such as the times Stephen fell asleep during sessions and woke up while falling off his chair :), etc. 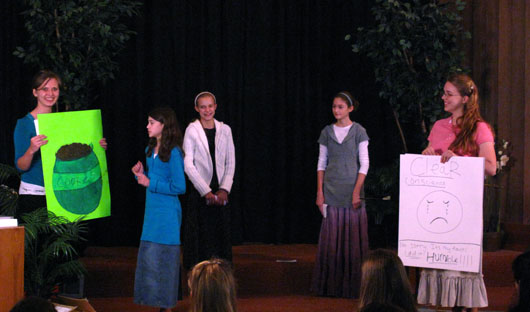 One of the activities during the training was to divide into small groups and, as a team, creatively present one Bright Lights lesson. The group pictured above did a great job teaching the Bright Lights lesson on “Keeping a Clear Conscience,” and we all enjoyed the way they illustrated how a girl will act in various situations depending on whether she has a “clear”, “guilty” or “dead” conscience. 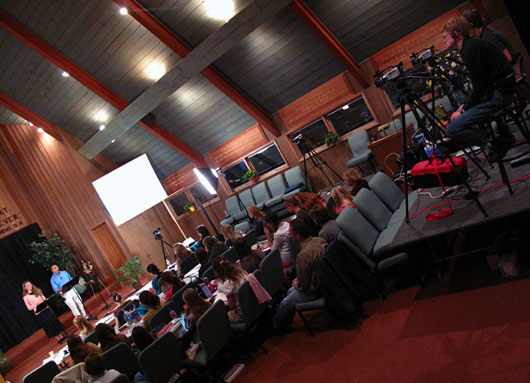 Stephen and Sarah giving their “Credentials without College” Presentation. (About life purpose, developing a ministry mindset, and having a bigger vision for your life.)

Tomorrow is the last day of the leader’s training. The taping has been going pretty smoothly. We are grateful for all Stephen’s “recruits” who have come to help tape, and for the patience of all the girls attending the conference. 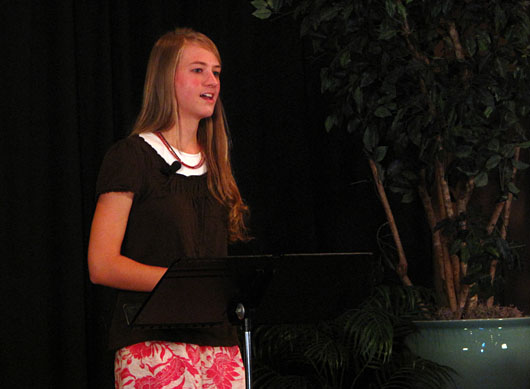 Abby Kramer shared about what the Lord has taught her through leading her Bright Lights group in Minnesota. She came to a Leaders Training six years ago and has been leading a group for several years now. She had a lot of good insights to share.

Actually, Sarah has asked several Bright Lights leaders (mostly from this area) share a session, and each one has been very mearningful. 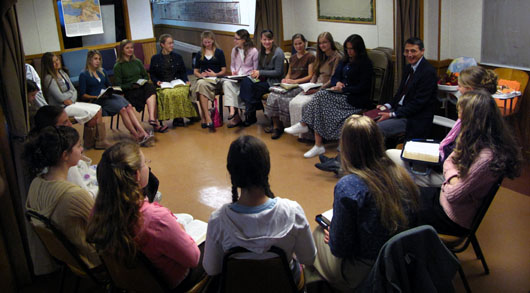 Each morning my dad leads a Bible study (we call them “Wisdom Seaches”) with the group. One of my favorite mornings was when we talked about the story David and Goliath. We discussed what the “giants” are in our day. What are the giants in our country that are defying the living God? We need more Davids to fight the Lord’s battles and conquer these giants. 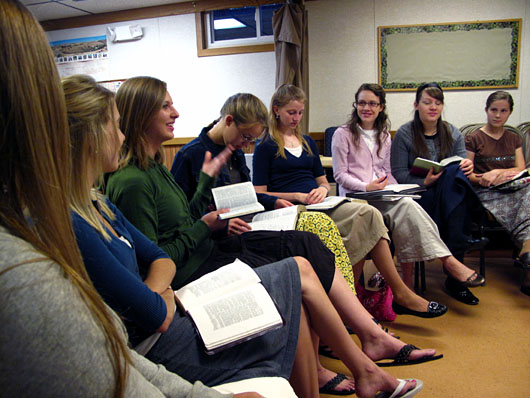 There are not many activities that are as satisfying as studying the Word of God together and learning from each other’s insights. 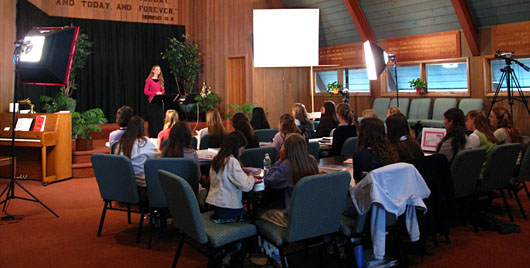 Today was the first day of the Bright Lights Leader’s Training! 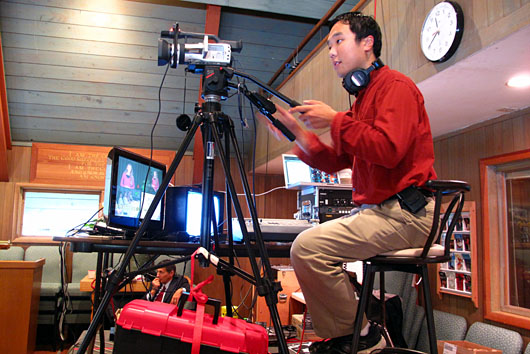 We are trying to capture the training on video this time, so Stephen has been spending long hours preparing and setting up. He’s doing a great job.

We’d appreicate prayer about this project. It would so helpful to have this training available on dvd. (At the moment it’s only available in CD form.) 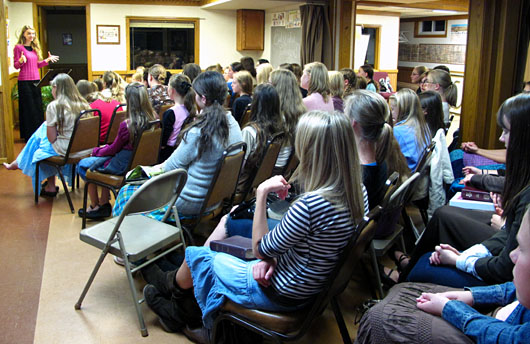 Tonight we also had our normal Bright Lights meeting. The topic was on “Accepting the Way God Created You”, and Sarah emphasized the importance of not worrying what others are thinking of you but fearing God instead.

Pray for Sarah this week because teaching a five day conference gets tiring!

We’re excited about the Bright Lights Leader’s Training beginning next week! This afternoon Abby and Nickie worked on sort of an unusual project….preparing the backdrops for the video.

We are still alive and doing well here at the Bright Lights office. Sarah Smith and Abby Kramer joined us a few weeks ago.

There are always so many different things going on around here, it’s hard to give an accurate report!
Some of you may be wondering what we do here at the Bright Lights office, so I’ll give you a vague outline. Every morning, Sarah and my dad and I have been working on writing projects. During that time, the “interns”, Sarah K and Abby, have been doing various studies that Sarah has outlined for them.
After lunch, we focus more on office details. This includes e-mails and correspondence, planning and scheduling, and processing and shipping orders. These things take a lot of time, so we are very grateful for the help from our interns (and Nickie, of course 🙂 ).
The bookstore we are setting up in the front area of the Bright Lights office has also been an exciting and challenging adventure. Lots of progress has been made, but there is a lot more to do. There are so many decisions to make and items to purchase–and this is all so new to us–so we are sort of operating by going from one answered prayer to the next. 🙂 We are hoping to open in about a month.
Other recent projects have included working the Bright Lights CD and songbook, several encouraging times of witnessing together, and a Desktop Publishing class taught by Stephen.