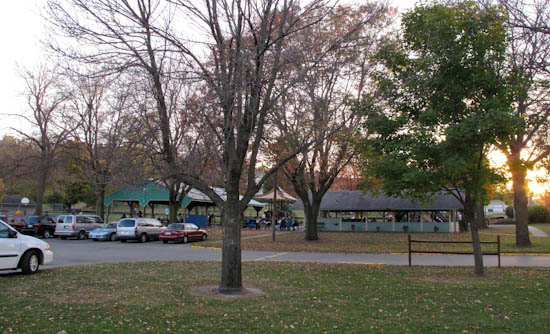 Last Saturday, Sarah, my mom and I went to this park to witness. As Sarah was turning off the engine my mom let out a blood curdling scream (believe me, when my mom screams it’s really loud!). As the automatic window closed, it had caught my mom’s fingers in between the window and the top of the door. Sarah quickly rolled the window down again, and we looked at mom’s fingers. They had black indention lines where they had been caught, but Mom said she was okay. Sarah and I were pretty startled ourselves after that loud scream, and Sarah and my mom went home to get ice.
I stayed at the park thinking, This has never happened before, and when does it happen? Right when we arrive at a park to witness. But often enemy attack means something good is about to happen. And that was certainly true this day.

“What do you think happens after you die? Sarah asked one lady, after she and my mom had returned.
“I don’t know but I’m scared,” the lady replied.
“Well, that’s a good start. It’s good to be concerned.” Sarah said, explaining how we are all sinners and God is a righteous Judge.
“Now I’m really scared,” she said.
But just as Sarah began sharing the good news, her granddaughter came up and she needed to go. Now Sarah had to give her some answers really fast! Sarah looked her in the eyes and told her, “you don’t need to be scared about what happens when you die, you can know for sure you are going to heaven if you trust these verses…” she said.
“What verses?” the lady asked.
Sarah showed her 1 John 1:9 and Ephesians 2:8-9 and encouraged her to confess her sin to the Lord and ask Him to save her.

“If we confess our sins, he is faithful and just to forgive us our sins, and to cleanse us from all unrighteousness.” (1 John 1:9)

“For by grace are ye saved through faith; and that not of yourselves: it is the gift of God: Not of works, lest any man should boast.” (Ephesians 2:8-9)

Sarah told her to read the tracts she gave her, and get alone with God to talk to Him about it. Sarah could tell by the look in her eyes that she was taking this very seriously. Wow–we prayed that God would direct us to hungry hearts and it’s so encouraging to see Him doing it.

Then Sarah began a little questionnaire with a young mom who said she believed in Heaven because she has good dreams about her grandfather and she knows that he is there. She believes she is a good person and that she is going to heaven because she gives all her time to take care of her little boy.
Sarah gently walked her through the 10 commandments and then talked about how “Everyone who calls on the name of the Lord will be saved” and also John 3:16 and how it’s not a general belief but a personal belief.
She looked at Sarah in a funny, curious way and asked, “Can I ask why you picked me to talk to?”
Sarah replied that there wasn’t really any particular reason, but that she had been praying the last few days that God would lead her to the right people.
“I’ve seen you at the mall before,” the young mom said, “and you’ve talked with my niece before.”
“Did your niece mind when we talked with her?” Sarah asked.
“Oh no, not at all!” she said. “You come across so nice—and when you talk with people they always remember it,” she told Sarah.
Sarah gave her some tracts and reminded her how every person has to make an individual choice to come to Christ. She asked Sarah’s name and shook her hand with a big smile.
“Thanks for being so sweet!” Sarah said.
“Well, thank *you* for being so sweet,” she responded.
I tell this story as a reminder that often people are very grateful when we talk with them. Not always, but often. But we won’t know that until we take the time to step out and begin the conversation!

I talked for about an hour with some staunch evolutionists. Very interesting and enjoyable conversation. Here’s a quick summary.
“Hey I’m working on a little project learning what people believe. Would you mind answering a few questions?” I asked.
“Sure,” they said.
“What do you think happens when someone dies?” I asked.
“Nothing–you just go into the ground,” they said.
“Okay. So did you grow up with any certain faith or religion?” I asked.
Sam hadn’t, and Naomi had grown up in a Unitarian church.
“The next question is this: If you had a problem with Christianity or an argument against it, what would it be?” I asked.
“Just one problem with Christianity?” Naomi asked.
I smiled. “No, you can give more than one,” I said.
“Well, I guess it would be that I don’t agree with Christians who say the Bible is 100% literal and has to be taken as fact— I think it’s more metaphorical,” she said.
“What about you?” I asked Sam.
“I don’t have a problem with Christianity,” he said. “In fact, a Christian friend just helped me out with something recently. Actually, I hope there is a God,” he said.
“So why don’t you believe the Bible?” I asked.
“Because I believe in evolution,” Sam said.
So we dove into a long discussion about Creation and evolution. Dinosaurs. Holes in the evolution theory. Complexity and beauty in creation which speak loudly of a Creator. And so on.
Naomi explained how they believed in science and I just take the Bible by faith.
“But it takes faith to believe evolution too,” I told them. “Because it’s a story of something that happened in the past.”
They couldn’t disagree.“Yeah, I wasn’t there [when it happened],” Sam said.
“So really, you don’t see any problem between Christianity and Science?” Sam asked.
“No not at all!” I told them, explaining how many of the early scientists were Christians.
“I really hope there is a God,” he said again. “The idea of a Creator and afterlife is so much nicer than just going into the ground to become worm food.”
Sam asked, “What actually is God?
As I explained God’s attributes I admit I was amazed by how little Sam knew about the Lord!
Finally, I got to share the gospel—how God, the Creator, became a man, Jesus, to take care of the problem of sin.
“Jesus is God??” Sam interrupted me, very surprised.
“Yes,” I said.
“I thought He was God’s Son,” he said.
Sam mentioned how he had never talked about religion very much with his friend who is a Christian. He said he didn’t want it to breach the relationship.
“Well we’ve been talking about it all this time and we’re still friends,” I told him.
He agreed.
I know Sam was genuinely intrigued and surprised by all I told him. They took the booklets that I gave them, and we parted with a friendly goodbye.
Please join me in praying for Sam and Naomi that the Lord would open their eyes to the truth!! It’s so, so sad to see how our society just indoctrinates people in evolution. Even though they can’t defend evolution, they still believe it because they’ve been taught this all their lives. But God can open the eyes of the blind.

“I am sending you to open their eyes so that they may turn from darkness to light and from the dominion of Satan to God, that they may receive forgiveness of sins and an inheritance among those who have been sanctified by faith in Me.” (Acts 26:18)