Last night some friends and I went downtown Cedar Rapids to pass out gospel tracts. We thought we would be giving them to people that were going to see a rodeo in the US Cellular Center. Little did we know that Bernie Sanders was also speaking downtown. We were thrilled to see hundreds of Bernie supporters walking down the sidewalk…now we had more people to give tracts to! They eagerly took the gospel IQ quizzes we were passing out. I think they may have thought we were part of their campaign. 🙂

Shelby and Luke also did a great job sharing the gospel with some people protesting the rodeo. They seemed to think they were good enough to get to Heaven on their own. Yet, if this could be so, why did Jesus need to die? His death on the cross was unnecessary if we could get to Heaven by our good lives. Galatians 2:21 says “if righteousness comes through the Law, then Christ died needlessly.” I hope they remember this point.

My friends and I look back over the evening with gratefulness to God for how he arranged the circumstances, provided swarms of unexpected people, good weather, and good conversations. Praise the Lord.

We are so grateful to Haley for the countless ways she has been a support and blessing to the Bright Lights ministry for the past 7 years.

She normally volunteers from her home in Texas (For example, one of her recent projects was the Simplified Bright Lights Songbook), but we were delighted that she was able to spend about 10 days with us in Iowa at the beginning of January.

The only problem was that it was a little colder here than she expected. I’m not sure she ever acclimated. 🙁

We love you, Haley. Thank you for everything! (And sorry you missed our weather here yesterday, it was -9.)

“Mom just called,” Dad said in a worried voice, two days ago. “She fell on the ice in the back yard, and she can’t get up. She doesn’t sound good.”
We jumped in the van and raced home from our office.
I began imagining the worst case scenarios. What if she hit her head on the ledges of the stone steps?
Thankfully, Mom’s injury wasn’t a head injury, but a foot injury. It turned out to be only a sprained or broken ankle and mildly hurt knee. What a relief. It could have been so much worse.

Our icy back yard

Here’s what happened: On Monday afternoon, Mom was carrying paint supplies through the yard, and she chose to walk through the snow instead of taking the stone path because usually the path is icy and the snow gives better traction. Usually. But not Monday! The snow was basically pure, hard ice. Mom found herself snowboarding down the hill–except without the board…and with her hands filled with paint supplies. The bushes at the bottom stopped her, and she hurt her foot on some bricks.

It’s been a nice change of pace for me to work from home and take care of her the past few days. The first day she didn’t have crutches, but I finally found a way to transport her to different rooms: my harp cart! Mom and I were both excited about how well it worked.

Her foot is still blue and swollen and we are still not sure if it is broken or sprained. She has a high pain tolerance and doesn’t complain much. We are grateful for God’s protection.

Today my dad called a good friend of ours, Dr. Bill Roberts, who is an orthopedic surgeon. He gave my dad some helpful medical advice, and then some spiritual advice. He said, “Here’s my prescription for Rebekah. It comes from Psalm 23. ‘He makes me to lie down in green pastures.'” Dr. Roberts explained that sometimes God MAKES us lie down, and when He makes you lie down—it’s green pastures. He reminded my dad that God is giving my mom a time of rest in His green pastures, so she should take advantage of it and enjoy this time of rest with the Lord.

Secondly, he mentioned that when Jesus was on the cross, He didn’t focus on the pain. Rather, He was concerned about others: The “daughters of Jerusalem” who followed Him weeping on the way to the cross, His mother, the soldiers crucifying Him, the people watching Him, the thief next to him… So when we experience pain, it is a reminder to follow His example and focus on others, praying for them.

Of course, my mom considers her foot injury to be minor compared to the pain so many others experience.

This phone conversation was a special encouragement to both of my parents. My dad mentioned how the fellowship we have among each other as Christians is such a blessing and so strengthening and encouraging in time of need. 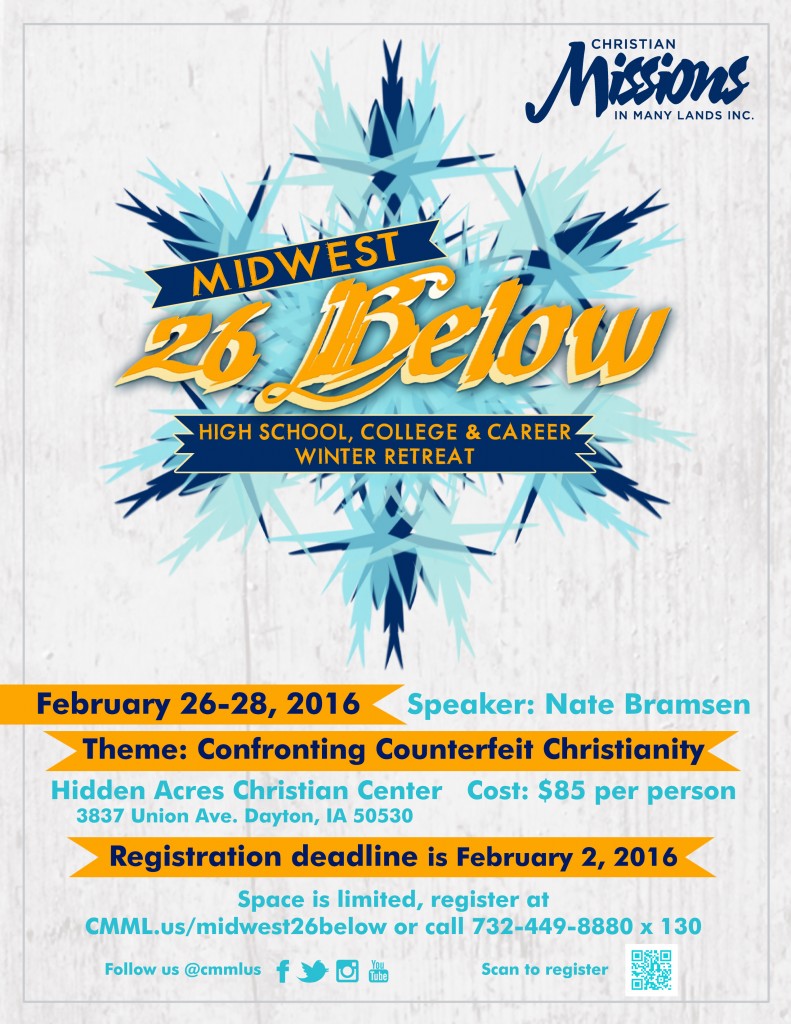 I have high expectations for how the Lord will work at this youth retreat coming to Iowa next month! This retreat has been running on the East Coast for almost two decades, and last year I had the joy of being a part of it. (I blogged about it here.) I was so excited to hear that the first “26 Below” was being held in the Midwest.

I would highly recommend that you look into coming if you are below 26 years of age. (And if you are a few years older, you’re still welcome.)

It will be held at Hidden Acres in Dayton Iowa (an hour north of Des Moines). See more details here. If you live in the Cedar Rapids area and would like to ride with us, we’ll probably be bringing a van or two.

The speaker will be Nate Bramsen, missionary to Niger. See him sharing some thoughts after persecution hit his village in Niger last year:

What a significant event happened sixty years ago today! After we watched this video, my grandpa began sharing stories about Jim Elliot. He and Jim led a youth group together at Lombard Gospel Chapel, and Jim was in my grandparents’ wedding. I have appreciated hearing stories from them, both serious and funny, about how Jim was the “real deal” – with a huge heart for God and people…even walking in between stopped cars at traffic lights to pass out gospel tracts 🙂 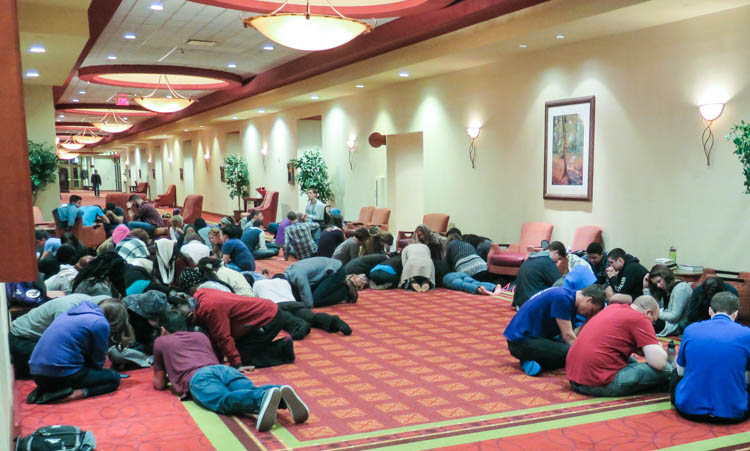 Over the turn of the New Year, I was blessed to be surrounded by about 70+ youth, praying in a hotel hallway, asking God to bless missions around the world in 2016. We split into several groups and divided the world into sections so we could “cover it all.” I think many would report that an hour was only long enough to “get started” … but at least it was a start!

Why pray together with our brothers and sisters in Christ?

The reason we were in a hotel was because we were all attending a conference together called the “Believers Bible Conference.” There were about 500 in attendance. About a third of those in attendance were young adults.

Nate Bramsen and Brady Collier led sessions with the young people at 9pm after the normal conference sessions were over. These times were fantastic. 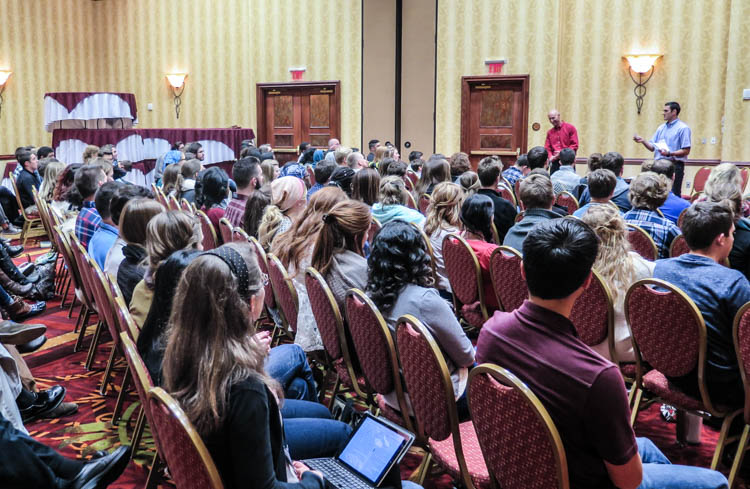 I snapped this picture during the Q and A time the final evening. Questions answered were mostly on courtship/dating, pornography, evangelism, and decision-making. Nate and Brady both have a way of powerfully articulating what it means to be a sold-out follower of Jesus… not asking “where is the line?” or “is this okay?” but rather running as far from “the line of sin” as possible, for the glory of God. Victory is found when we daily experience the “explosive power of a new affection” which transforms every area of our lives. 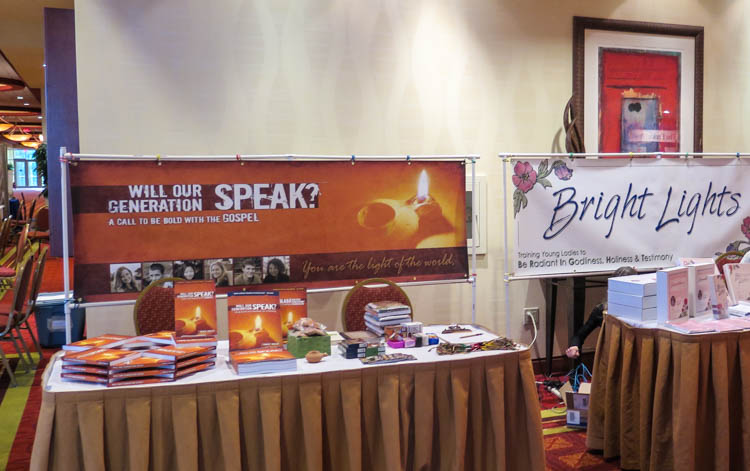 If you look closely, you can see that little clay oil lamps are now part of my “Will Our Generation Speak?” table display. I was blessed as I explained to people over and over a few analogies between us and oil lamps. The lamps are a continual reminder that if we want to burn brightly, we need to make our relationship with Christ first priority–going to Him daily to be refueled. 🙂 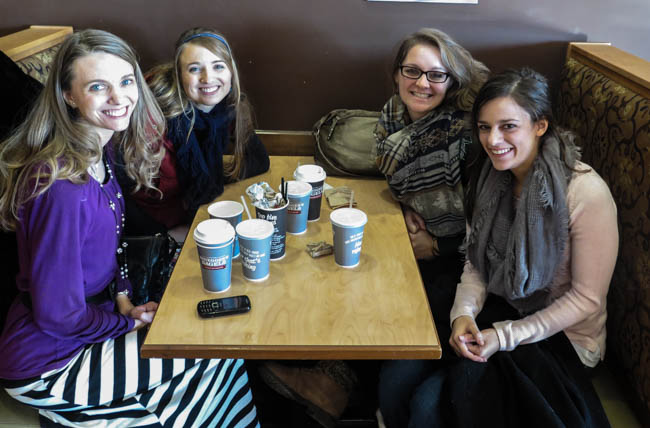 Heidi and Haley rode with Sarah and me to and from the conference. Our fellowship in the car was enriching and basically non-stop. 🙂 Thank you, Haley and Heidi, for your vibrant walk with the Lord and the refreshment you are to us!