Why did Jesus tell Mary Magdalene to not cling to Him (or to “stop clinging to Him”) in John 20?

I’ve heard many explanations, but I liked the one I recently read in my Choice Gleanings Devotional Calendar (April 17, George Ferrier), which says, “…the Lord responded that the time to cling to Him was after His ascension. No longer seeing Him physically she would then depend upon Him through spiritual eyes…”

Clinging to the Lord is a repeated Biblical instruction (Deut. 10:20, 13:4, Joshua 23:8, Psalm 63:8, Jeremiah 13:11). The Lord wasn’t changing the instruction here; but He was telling Mary (and all of us) that we have something much greater than His physical presence to cling to. 1 Corinthians 6:17 tells us we who are joined to the Lord are one spirit with Him!

Moses wrote, “The eternal God is thy refuge, and underneath are the everlasting arms (Deut. 33:27).” Psalm 125:2 says that He surrounds us!

Although Jesus is not with us physically right now, He is with us! And we can cling to Him–as the apostles did after His ascension. He gives abundant comfort, companionship, counsel, and strength. Because of His near presence (Phil 4:5), we can be anxious for nothing (Phil 4:6). May we be clinging tightly when He returns!

“And now, little children, abide in Him; that, when He shall appear, we may have confidence, and not be ashamed before Him at His coming (1 John 2:28).” 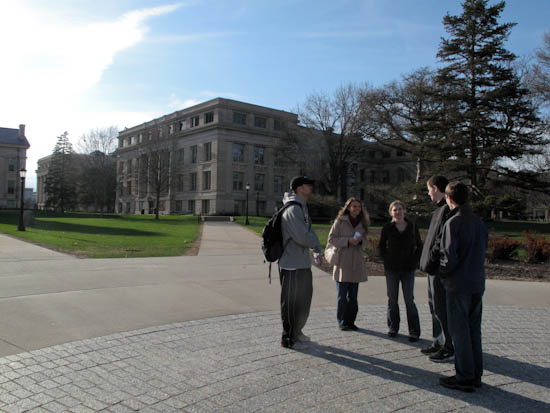 Yesterday we went witnessing at the University of Iowa. Here’s our group meeting up afterward to discuss how the conversations went. 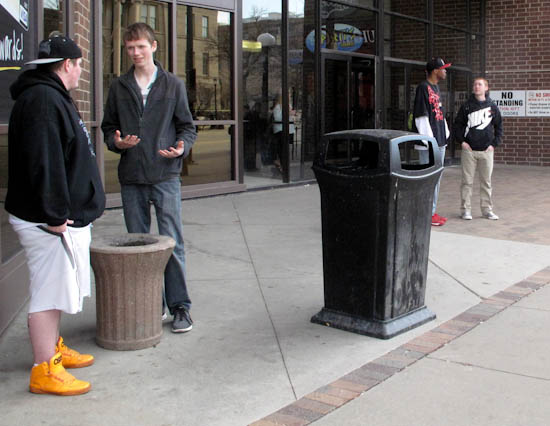 One guy asked Luke, “Are you the one who gave me the million dollar bill?” He said he remembered talking with him before. We told him it wasn’t an accident that we bumped into him again! (Note: there are 30,000 students at the University of Iowa, so it’s not that likely to run into the same ones again!)

I met two girls from Malaysia. They thought it was neat that I had been to their country four times, and we instantly became “friends.” After I shared about the significance of this weekend (celebrating the resurrection), I asked them, “So what do you guys think is the way to have peace with God?”
“By reading the Book,” they replied.
“The Quran?” I asked.
“Yeah and the Book, your Book, the Bible—the Quran tells us to read that.”
“So have you read the Bible?” I asked.
“Yes, some,” they replied.
“With Christians or Muslims?” I asked.
“Both—we’ve gotten together with Christians to read the Bible and talk about it.”
“Wow, that’s great!” I told them, “Maybe you could come to my house!”
They were warm towards that idea; hopefully the Lord will work it out.

On the way home, I told this story to those in the van. This caused us to begin discussing various international friends that we have been trying to arrange to have over for dinner. I mentioned the name of a student who was a friend of my dad’s who we’ve been wanting to have over. When our friend Eric heard me mention that name, he exclaimed, “He’s the guy I’ve been witnessing to that I was telling you about!”

After comparing a couple details, we became confident that we were talking about the same guy. Eric, who attends the same university, explained about the good conversations he had with this guy! He has even had him over for dinner. We told Eric how my dad had become friends with this student as well and has met with him for coffee and brought him to our church. Neither knew the other one was witnessing to him, but both Eric and my dad were very encouraged to learn this. Praise the Lord!

Often we forget that we are usually just “one link” in a chain of people that God is using to bring someone to Christ. But *sometimes* the Lord lets us see another link in the chain. [smile] It’s so encouraging to be reminded that He is powerfully carrying out His plans–and He is intimately involved in all the little details.

Here’s another recent example: About a month ago, an out-of-state friend shared with me some video footage and pictures from an evangelistic outreach at a university in his area. One of the video clips was of him witnessing to a student from a country closed to the gospel. As I was watching the video and heard the student say what country he was from, I realized, I think I might know that guy!!

You see, last summer when we were traveling in that state, my dad and I were able to witness to a guy from that country who told us where he was going to school (the same university where my friend was doing the evangelistic outreach). We established a friendship with him and even got a picture together. We pulled up the picture, and to us he looks the same as the guy in the video our friend sent us. Same guy? We think so. If not, at least they know each other because they are from the same country studying at the same university.

This was a reminder to us to pray. The odds of our friend witnessing to the same guy we had witnessed to (in another state!) are not high. And the odds of us finding out about it are definitely not high! This was the first time we’d received a video from our friend of a witnessing conversation, and who was he witnessing to? Someone we think we already know?! Only God can write stories like these. 🙂

“Come and see the works of God, who is awesome in His deeds toward the sons of men… He rules by His might forever; His eyes keep watch on the nations … Bless our God, O peoples, And sound His praise abroad” (Psalm 66:5-8). 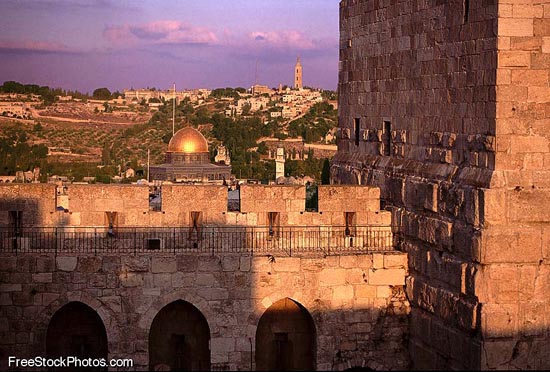 There was sure a lot for the believers in Jerusalem to be talking about 2,000 years ago after Jesus rose from the dead! I love the way the Lord caused the resurrection story to play out with all its interesting elements, aspects, and angles!

I enjoyed Tim Chaffey’s article and chart on evidence for the resurrection in the most recent Answers Magazine. If you don’t get Answers you can read it here.

One point that I hadn’t thought of before was that Mary Magdalene — being both a woman and a previous demoniac — would have been practically the last person the Jews would have trusted as a witness for Christ’s resurrection. If someone was making up this whole thing, they certainly wouldn’t have formed a story that had Mary Magdalene as the first person Jesus appeared to! Women’s testimonies were not highly valued in those days, and a woman who recently had seven demons makes her much less trustworthy! To read Tim Chaffey’s fuller explanation of this, you can also click here and scroll down to “Principle of Embarrasement.”

Also, in regards to using this week for witnessing, here is a link to our Resurrection questionnaire and tract.

And if you’d really like to read more about evidence for the resurrection of Jesus, I’d recommend reading Tim Chaffey’s whole series of articles from last year. [smile] 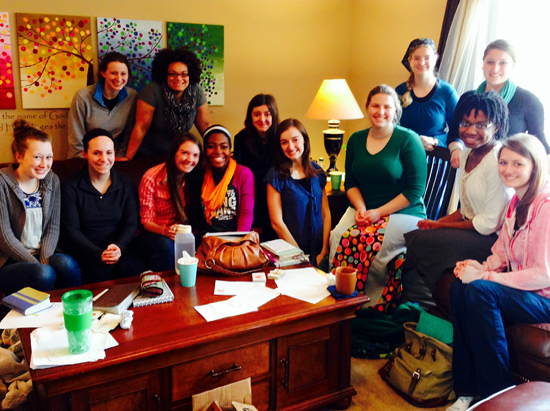 Our friend Annie (in pink on right) hosted a Bible study weekend recently for girls ages 15 and up on Galatians and sent me this picture. She said the girls came prepared to share about what they learned from studying beforehand and that it was encouraging to hear the girls’ thoughts and insights. They also did this last October on the book of Ephesians.

Last time we ran one of these Bible study weekends in our area (our 1 Peter weekend), we were extremely blessed. If any of you would like to run a girls Bible study weekend in your area, I’d highly recommend it! Just pick a book of the Bible, have everyone study it beforehand, and be prepared to be blessed by the deeper fellowship you will enjoy as you dig into God’s Word together. Can you think of a better way to spend the weekend with friends?! [smile]

“I am a companion of all them that fear thee, and of them that keep thy precepts.” Psalm 119:63 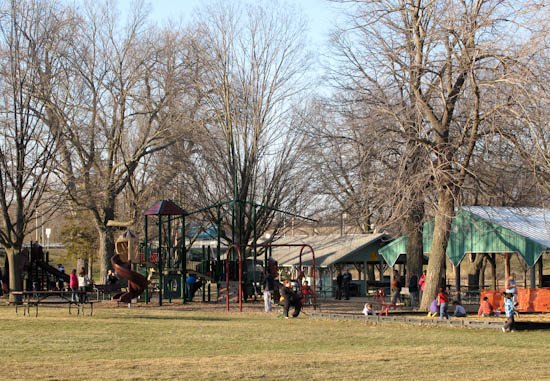 Yesterday at the park a young mom told me her spiritual beliefs. Her friend laughed as she described her “religion.” Her “belief” was a blasphemous reaction to creation to mock Christianity.

This is going to be an interesting conversation, I thought to myself.

I hadn’t even said anything yet about what I believe, yet right from the start she had clearly stated her rejection of my views.

I knew she probably wouldn’t respond well to questions about sin or Jesus, so instead I asked, “What do you think is the biggest problem in the world?” (I don’t normally ask this question, but I had just written a new questionnaire about an hour earlier. I saw the Lord’s provision in that!)

She and her friend liked the question and basically answered that the biggest problem in the world was selfishness. This led into a conversation about Hitler, morals, and truth, and the need for a standard of right and wrong (which they agreed to).

“I guess it comes down to ‘be a good person and that’s all that matters,’” Jackie said.
“Well, here’s my thinking on that,” I told her, “I know that I am not a good person in comparison to God’s holiness and perfection. It’s all in what you compare to.”
Though she didn’t agree with me, she couldn’t exactly disagree either.

Throughout the next half hour or so, I did a lot of listening and a lot of asking questions. A few times I squeezed in some truths, such as: how Christianity is different from the religions, God’s “rescue plan,” the difference between operational and historical science, etc.

I told them, “I disagree with all of the religions.”
This statement seemed to surprise them.
I explained, “All of the religions are about attaining favor with God. But the Bible says that doesn’t work; we could never attain God’s favor. Christianity is about God reaching down to us.”

When I left they thanked me warmly. They stated how nice it was to have clearly opposing views yet still have an enjoyable conversation.

When I came back and recounted the story to my dad, he reminded me of the power of questions. In a situation like this one–when you are talking with someone who has firmly and blatantly rejected Creation and Christianity–questions are a powerful tool. Sometimes, if we ask the right questions, people talk themselves into a corner. Often, it makes a more powerful impact to let them come to the conclusion that they don’t have good answers, rather than simply stating “you’re wrong and here’s why.” I think this is part of what Jesus meant when he told us to be as wise as serpents and harmless as doves (Matthew 10:16).

They probably won’t admit that they don’t have good answers at the time, but the Lord can bring the conversation back to their mind and use what we said.