Yesterday our van was making a weird noise. My dad asked one of the girls on our team, Nawon, if she knew of a good mechanic (because she lives in this area). Nawon said that her pastor was a mechanic.

After her pastor fixed our van, we offered for his girls to come to our conference for free. What we didn’t know is that his wife and daughteres already knew about our conference and had been praying that they would be able to come. But because of some medical bills they couldn’t afford it. 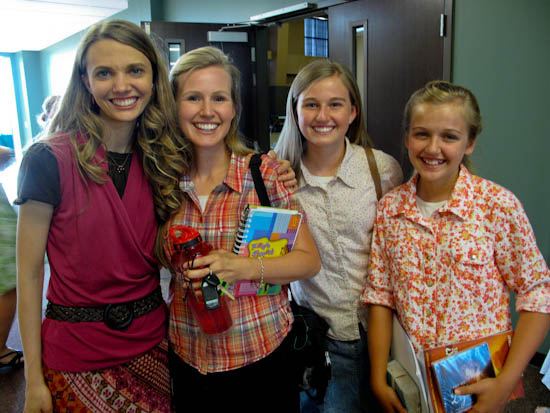 You can only imagine the mutual delight we experienced when we realized how the Lord had worked this out! Praise the Lord who works in awesome ways (and even breaks vans temporarily) to provide for His children. 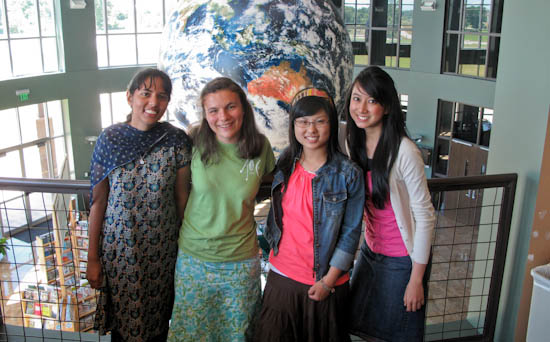 A special element of this conference has been our fellowship with our four international leaders: Supriya from India, Maaike from Congo, Nawon from Korea, and Bernita from Singapore. One of our prayers is that the Lord would continue to spread Bright Lights internationally. 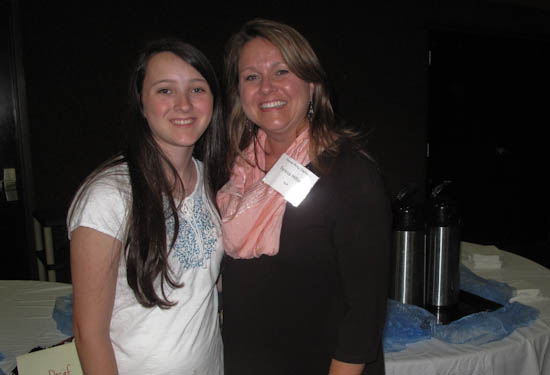 We are very grateful for all that Teresa, our hostess for this conference, and her daughter Maddie have done to make this conference happen! Thursday evening (our free day) we had a very relaxing evening at their home…. 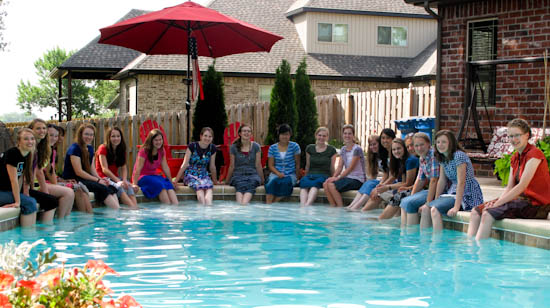 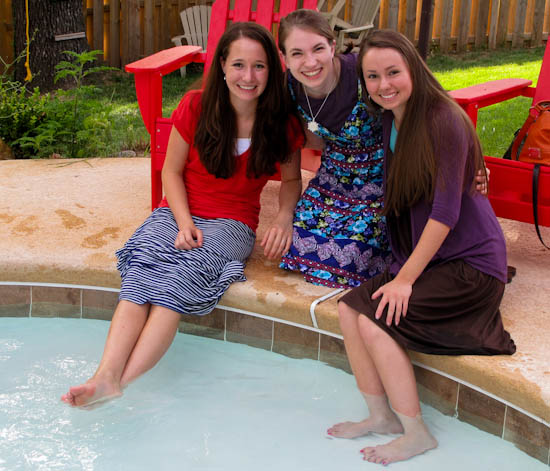 Natalie (from Texas), Allison (from Illinois), Sarah (from Arkansas) have each been leading Bright Lights groups. Actually, a large percentage of the girls on our team have their own Bright Lights group at home. It’s fun to hear them compare notes and share ideas regarding what they’ve been doing in their groups. 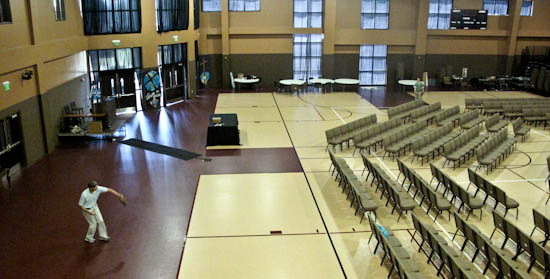 Here’s a picture of my dad and brother finding another creative time and place to play catch. They bring their baseball gloves everywhere. No broken windows yet. 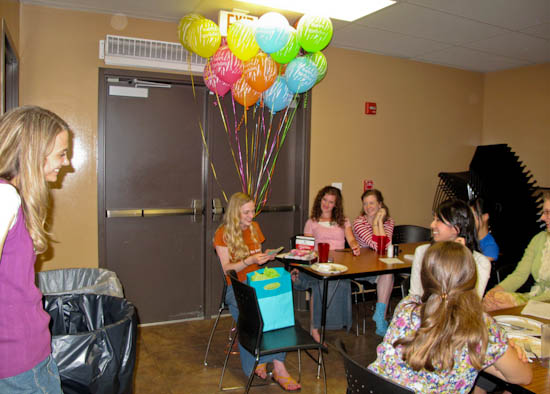 Tomorrow we take off for Houston. Thank you for your prayers for us. We finished our sharing time a little bit ago. Praise the Lord for the responsiveness of the young ladies and parents who attended the conference.

At each Purity conference, our main goal is that the girls would grow deeper in their relationship with Jesus. When our heart’s affection is in the right spot, everything else falls into place. Please pray that the attendees would grow in their love for the Lord, and that we would as well!

“For as many as are the promises of God, in Him they are yes; therefore also through Him is our Amen to the glory of God through us.” (2 Corinthians 1:20) 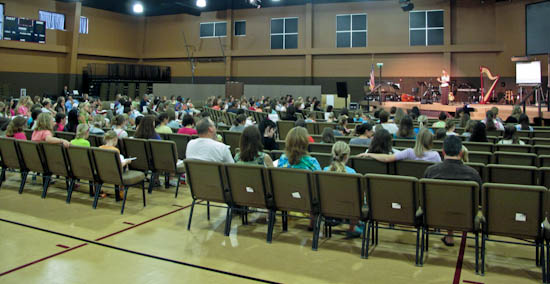 Things are going well here in Arkansas! Yesterday we concluded the “Strong in the Lord” Conference, and tomorrow the “Radiant Purity” Conference begins. Please pray for us and for the attendees. 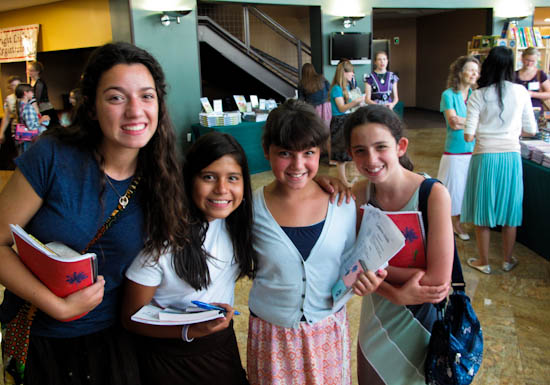 Olivia (left) with three conference attendees. Olivia is just starting a Bright Lights group here in Arkansas, and we’re so glad she joined us to help at these conferences. 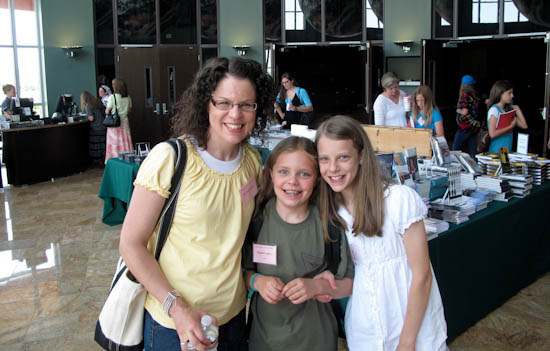 Hannah (right) and her mom and sister. Hannah’s mom told me about how faithful Hannah is in passing out tracts. She told me her favorite is the “Good Person Comic” from Living Waters. It sounds like the Lord is really using her! [smile]

The topic of “learning to witness” is often the topic that the attendees say they are most interested in. Please pray that the Lord would give these girls boldness to act upon what they are learning and truly be bright lights! 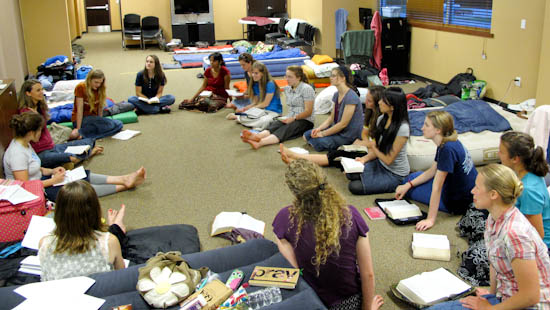 The Lord has provided a fantastic team of leaders. They have really been an encouragement to me! It is a true gift to be able to have fellowship with other girls who have been walking with Jesus and have riches to share because of it.

I took this picture Monday night as we were studying 2 Corinthians 1 before bed. It was very refreshing [smile]. We chose 2 Corinthians as our book for this 3 week trip. 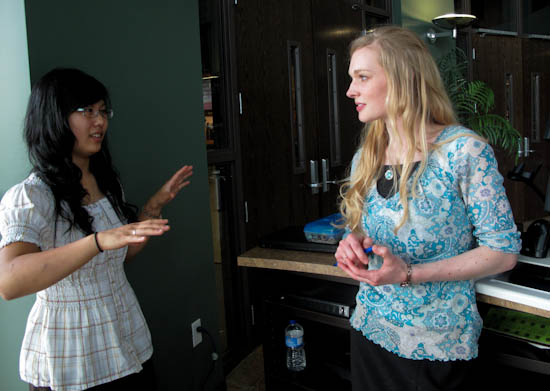 Nawon talking with Nickie. Nawon is from Korea and has led a purity conference for young ladies in Korea. She sees a lot of needs among the girls there and has a heart to provide more discipleship for them in the future. We are excited about how the Lord is going to continue to use her. 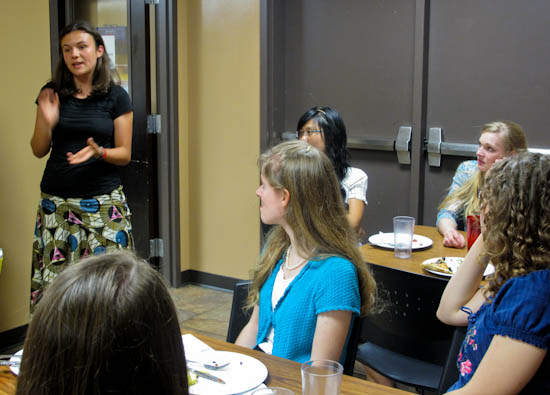 Last night Maiike shared with us the whole story of how she began a Bright Lights group in Congo. She gave a beautiful report of the Lord’s hand at work, even though it has not been an easy process. She has been back in Canada for the last 9 months, but the local girls in Congo have continued the work. And Maiike is thrilled to be returning to Congo in September. The Lord has given her great vision for discipleship for that country, and her enthusiasm is very encouraging. [smile]

We had a very good trip down to Arkansas yesterday. This morning we are unloading and setting up at the church. 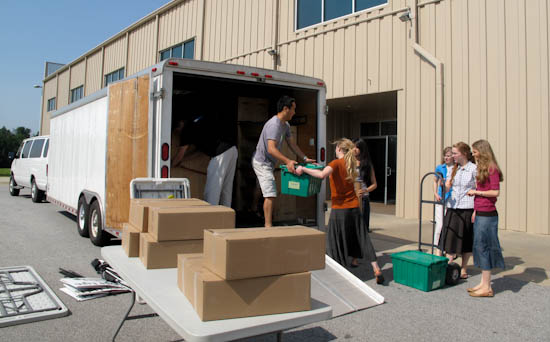 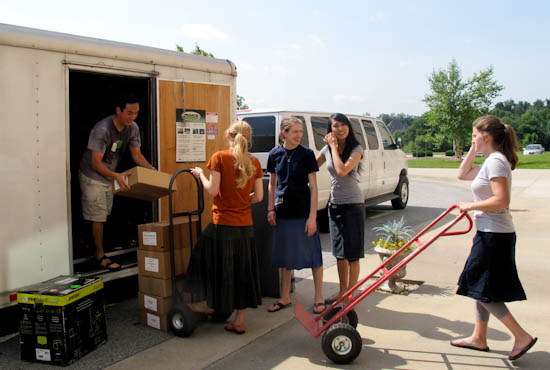 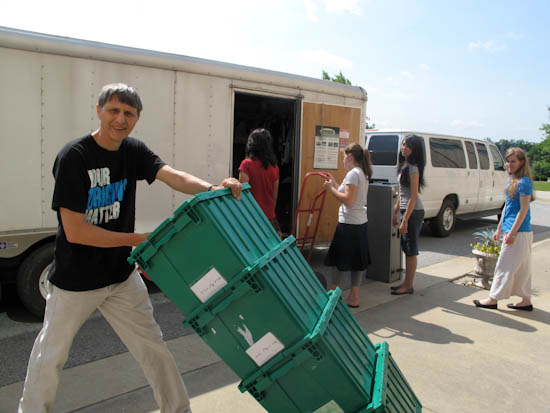 Though many of our previous Bright Lights leaders are now married, courting, or busy elsewhere, we are grateful for how the Lord has provided many new girls to join our team this year. We’d appreciate prayer that the Lord would work in mighty ways in the lives of the young ladies and parents who will be attending these conference here in Arkansas this week. Please also pray for strength and wisdom for our team.

“… the grace of our Lord was more than abundant, with the faith and love which are found in Christ Jesus.” 1 Timothy 1:14

About two weeks ago I flew to Cincinnati for a reunion with some good friends who I met during a 7-week music theory class we took together in Indianapolis about 6 years ago. In the above picture we are eating lunch at Noah’s cafe at the Creation Museum.

It is great to have old friends. When you do something hard together you bond, and our class has stayed in touch all this time. Our reunion was 3 days. It was difficult to arrange but it was worth it. There were some good times of special fellowship in the Lord.

And here is a picture of some new friends! On my flight to Cincinnati, I met a girl from Saudi Arabia who will be attending the university in Cincinnati. We are both 24 and hit it off right away. She explained how it was very sad for her to leave all of her friends at home, so she was glad to have now met her first friend in the States. After we got off the plane, she introduced me to her whole family. It was so obvious to me that the Lord had coordinated that meeting, and I hope it works for us to meet up again next time I am in Cincinnati. Praise the Lord for the good conversations He arranges on airplanes!

While I was in the Cincinnati area I took a couple days to volunteer at the museum. If I didn’t have other obligations at home, I’d do this more because I am always blessed by the time I spend helping out at the Creation Museum [smile]. Here in the warehouse we were working on materials included in the VBS curriculum.

Here’s a behind the scenes glimpse of a brainstorming session in an Answers in Genesis office. They were discussing ideas for the banner that Dan Lietha (AiG Cartoonist) is designing for the AiG booth at the National Educator’s Convention this year. Each year they create a different banner, and I think this one is going to be great. (Please pray for that outreach, by the way.) See last year’s report here.

One of the highlights of my trip to Cincinnati was spending time witnessing at a park with this group of young people. Most of them had never done anything like this before. We had a quick training time, paired up, and went out to try to get into conversations. We used questionnaires and/or gospel tracts or to help in starting discussions. I admit, I was a bit apprehensive about how it would all turn out, but everyone came back with smiles, laughter, and good reports. Praise the Lord!

I was paired together with Aaron, a fourteen-yr-old with a real enthusiasm for learning to witness. This was the first time he had actually gone witnessing in a public place, and I was praying the Lord would give us a good conversation that we could learn from.

Aaron and I found a guy who was willing to talk and called himself a “Deist.” He had some Bible knowledge and a lot of “issues” with what he saw in the Bible. He kept bringing up topics such as the Levitical dietary laws, making comments like “remember you’re quoting from the book that calls shrimp an abomination.” [smile] While not wanting to entirely avoid his arguments, I was also trying to get to the heart of the matter—sin and the good news of the gospel—because I knew we had limited time. So we began discussing sin, and I tried to gently convince him of his need for a Savior.

As we were discussing this, several other guys came and sat down on the grass to listen. Eventually, I turned to them and asked what they thought.
One of them stood up and stated, “I’m an Odinist.” He seemed to enjoy this opportunity to see my response to his beliefs.
“Oh. What’s that?” I asked, looking up at him.
“She doesn’t even know,” they laughed.
“I worship Thor,” he explained.
“Oh… I think I kind of get it now,” I said, smiling.
I decided he looked kind of like a Viking, the more I thought about it. [smile]
Hmmm….. this conversation just keeps getting more interesting.
“Your people killed thousands of my people,” he continued, looking down at me with a stern expression. “And you are just the same as they were … judgmental.”

I guess my emphasis on explaining sin to the Deist guy was making the Odinist guy very uncomfortable. That was probably a good thing, but all the same, I felt I should clarify my motives.

“You know, I think I may have given the wrong impression, because that’s not my heart at all,” I explained. “I’ve sinned too, and I’m just trying to explain how much we need a Savior. I’m really sorry if I came across wrong!”
“You’re fine” the Deist said coolly.

“So. You believe the world is 6,000 years old?” the Odinist asked condescendingly.
“Uh, yeah! I do! Have you guys been to the Creation Museum? It’s right here in town … ” I smiled.
“Well, there are ancient documents in China that are 12,000 years old,” they replied.
Of course, I challenged that, but they were insistent, so I said we’d look it up.
I left them with a few tracts and a DVD. Although they didn’t act receptive, who knows what God is doing in their hearts!

As we were walking away, I told Aaron, “I hope this conversation doesn’t intimidate you, because not everyone is like them…”
But you know what, I think the opposite was true. It didn’t intimidate Aaron, it actually aroused excitement for all of us. We knew the Lord had been arranging our steps.

It’s a relief to realize that there’s no need to be afraid of encountering new beliefs or arguments. (There will always be more of them!) And there’s no need to answer every question we are asked. We can simply enjoy the process of interacting with people, learning about them, asking them questions, and sharing the truth that we do know with humility and graciousness.

Back home at the Bright Lights office (where I am now), we have a lot going on as we are leaving in 5 days for a 3 week conference trip. We are VERY grateful for the help of Anna and Michelle (pictured above) who flew in early to help us before the conferences. (We are also very grateful for Claire who was here earlier.)