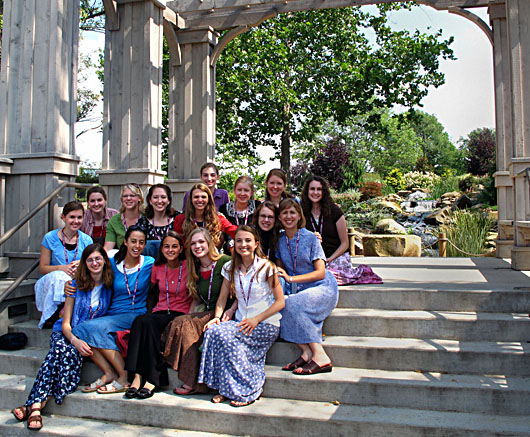 Our team of leaders, taking advantage of the beautiful picturesque grounds.

Below are a few examples of ways we saw God working and answering prayer at this conference.

-Just a week and a half previously, a man designed and donated a Bright Lights registration sign (as seen in the registration pictures on the slide show) and delivered it to us at our conferences in Virginia. It was a wonderful addition to our registration booth outside the museum. God provided at just the right time. My dad says you might call it a “sign from God.” 🙂

-The weather was beautiful, allowing us to do the small groups in the outside gardens and pavilions.

-Our whole team of leaders stayed at a guest house on the museum grounds. A few museum volunteers who were staying in the same location decided to get up at 5 AM to make a pancake breakfast for our entire staff. This was completely unexpected and very much appreciated!

-Although unexpected complications could have developed from running a conference at a location where there’s already so much going on, the whole day went smoothly. From registration, to the main sessions, to the small groups outside, everything stayed on schedule, and there was an enthusiastic spirit among everyone.

-One mother gave four extra planetarium tickets to Nickie, asking her to pass them on to anyone who could use them. Praying that God would direct her to the right family, Nickie approached a mom with two daughters in the main hall and offered them the free tickets. They joyfully thanked her, and as they were walking away the mom said to the smiling little girl, “See? God gave you the desire of your heart!”

-Many girls indicated on their response forms that they made commitments to spend time in God’s Word every day, to honor their parents, to keep a clear conscience, to minister to their brothers and sisters, to keep themselves pure from polluting influences, and to be strong for the Lord in their youth.

“Great is the LORD, and greatly to be praised; and his greatness is unsearchable. One generation shall praise thy works to another, and shall declare thy mighty acts.” Psalm 145:3-4