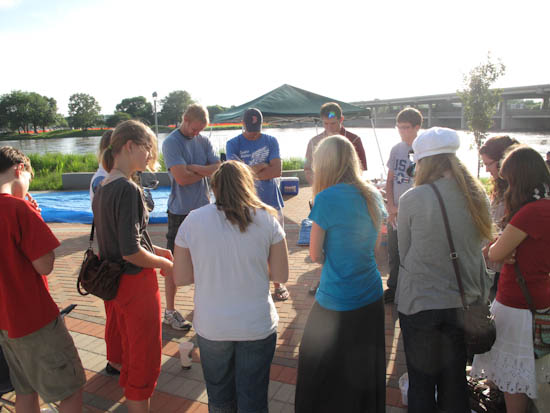 A group of friends joined us to share the gospel downtown on the fourth. Praise the Lord He gave many encouraging encounters! We found people were especially drawn to the Evolution Vs God DVDs that we gave to those we spoke with. 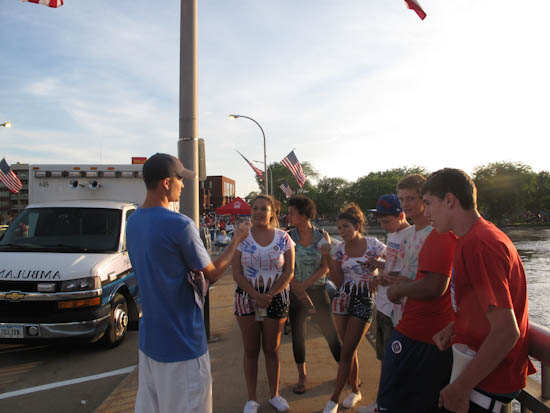 Brad talking with six teens. Although they were goofing off some of the time, he stuck with the conversation, had fun with them, and lovingly communicated the law and the gospel.
“So what do you guys think?” he asked after finishing.
“I’m scared now,” some of the girls said.
That was an interesting yet encouraging response, we thought. “The fear of the Lord is the beginning of wisdom” (Psalm 111:10).
We explained that it was good they were taking this seriously, and emphasized that God’s message is good news.

Approaching little groups like this is one of our favorite ways to witness at these events. It’s personal and friendly, yet you get to reach several people at once.

On the afternoon of the fourth before we started witnesing, I got a text from a girl that I had witnessed to at the parade the previous week — asking if I’d be at the fireworks. I responded that I would, but then didn’t hear any more from her. I thought it was unlikely I’d be able to find her. But, just as we started witnessing, there she was, calling my name! I was sort of shocked. [smile]
There was a guy with her this time. When I explained to him how we’d met last week, he became very curious. “So what was it that you guys were talking about last week?” he asked.
Realizing this was a good opportunity to witness to him now, I started to share. Then my friend Brad joined the conversation and recognized this guy! Brad said, “Hey, I know you!”
The guy seemed to acknowledge he knew Brad too, but acted awkward.
“At the mall, like three years ago, remember? You were witnessing WITH me!” Brad told him.

Then I remembered this guy too. He had actually joined our witnessing team once about three years ago because another guy on our team was discipling him and brought him along. We had paired him with Brad and they spent a couple hours witnessing together at the mall. How interesting to run into him again while we are out witnessing! Unfortunately, it seemed clear that this young man has fallen away and is not walking with the Lord now. He didn’t want to stick around and talk. But I do not doubt that the Lord caused our paths to intersect last night! So please pray for him. He obviously already knows the gospel.

Prayer request:
In about three hours, our Bright Lights conferences here in Cedar Rapids begin. We have a large number of leaders who have come in to help — there are about forty of us! We’d appreciate prayer for the Lord’s hand to be intimately upon each aspect of this week! It is already going great – praise the Lord! 😀