I’m grateful for the opportunity to be sharing on evangelism at the “Ignite Conference” in Albany, New York, February 27-28th.

Please pray that the Lord would raise up laborers to the harvest in Albany, New York!

Our dad wrote about the value of bedtime stories in this month’s ministry newsletter. For those who aren’t on our e-newsletter list (and would like to read about the exciting saga of Black Bulldog and Clawpatch), you can view it here. 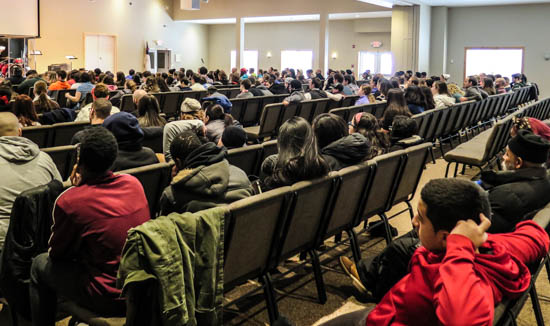 Last month I had the privilege of being part of the “26 Below” retreat, run by CMML (Christian Missions in Many Lands) the missionary sending organization of the network of New Testament-patterned Bible churches that I have grown up in.

It was a very challenging and refreshing time. 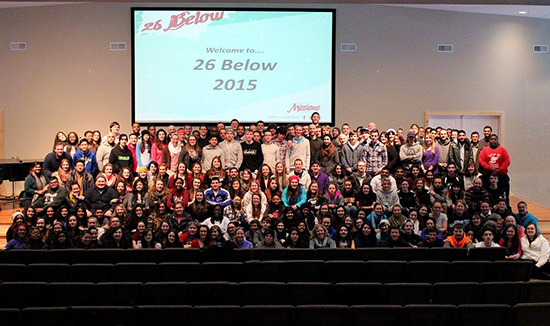 The speaker was Nate Bramsen, missionary to Niger. The day of the conference he got word that religious extremists were burning churches in Niger and burned a place of worship in his village (a stone’s throw from his home), and almost burned his home and teammates’ homes. His team had to leave the area.

I think Nate’s Christ-like response to this news made an even stronger impact on the retreat attendees than his messages.

“Some call them terrorists, but I call them blind,” Nate mentioned, emphasizing that when we look at the cross we can’t help but “fall in love with them” and pray for their salvation! I’d encourage you to read the article he wrote for the Gospel Coalition about these events. 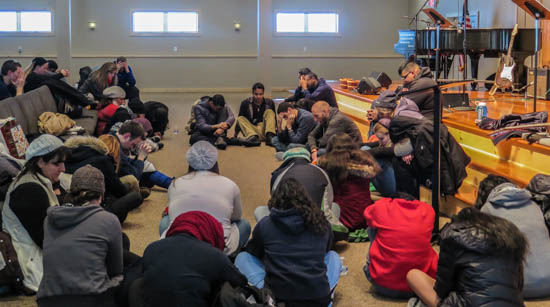 We had a one-hour prayer meeting for Niger, asking the Lord to use these events to draw people to Jesus. I normally don’t pray for just one country for an hour, and doing so reminded me of how much you can think of to pray for regarding one country simply when you just keep praying! 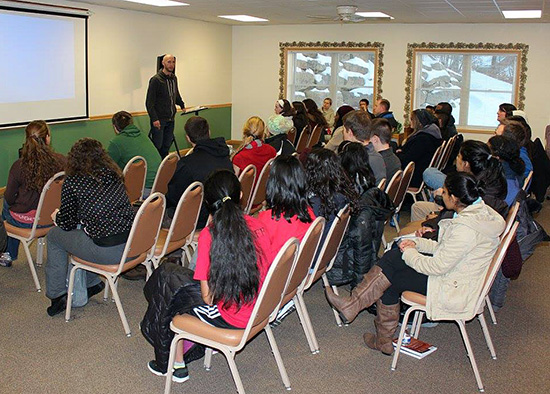 In the Q and A time, one topic that was addressed was this: following Jesus sometimes means you will be alone and may not always have the fellowship you desire. But you will have Christ, and He is enough. 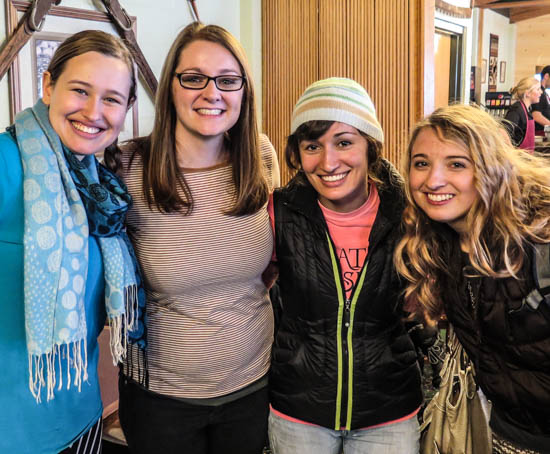 I really enjoyed my roommates. =)

The fellowship at this conference was so sweet. Raw, honest, Christ-focused, and energizing – it’s such a gift from the Lord to enjoy fellowship with other like-hearted young people who are excited about the gospel and using their lives to proclaim it. 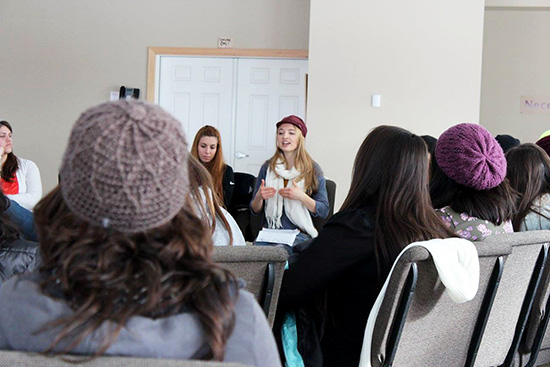 Girls breakout session on purity called, “Satisfied in Jesus: Purity and Struggles of the Heart.” I was blessed by the sharpening comments the girls contributed. One girl spoke of the “idolatry of the heart” that a crush can be. Another emphasized the simple cure of looking at the cross when we’re struggling with getting our focus right.

The topic of the conference was “Transparency.” I appreciated Nate’s point that a Christian’s transparency shouldn’t be simply “being real” or “just being you,” but rather “being clear” or “being invisible” so that the world can see Christ IN you. How much do people not see Jesus in me because they simply see so much of ME? Transparency is getting out of the way so that they see Christ.

To hear the messages from the conference click here. Or, to hear Nate’s podcasts on Matthew click here. (Some of my favorite podcasts have been “Shut the Door”, “The Anatomy of Anxiety”, and “The Answer to Anxiety”)

Two weeks from today I’ll be in New Jersey sharing an “Introduction to Bright Lights” at Mountain Ridge Bible Chapel (not far from New York City). We’d love to see more Bright Lights groups start on the East Coast. If you know anyone in the area who would be interested, click here for the flyer. 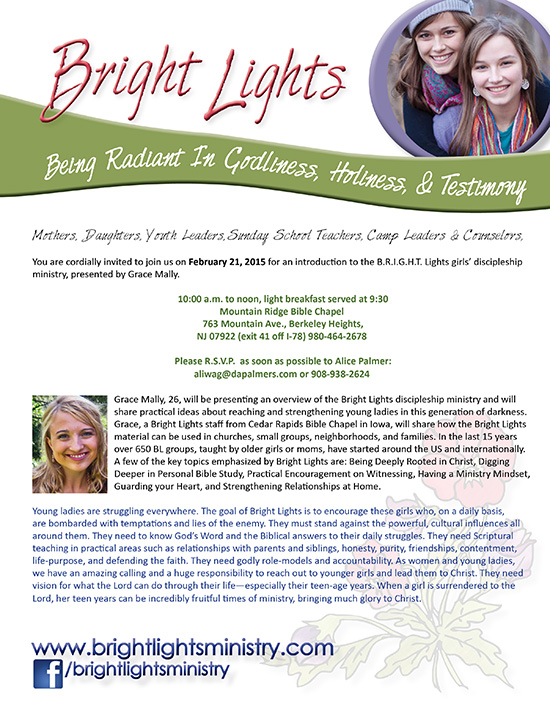 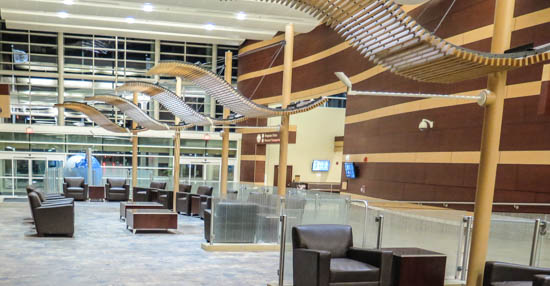 I love airports. They are great places to witness. I don’t always feel like it, but I am always glad afterward.

Two weeks ago I took a trip to New York for the CMML “26 Below” Conference (which I will post about soon). One of the highlights of the trip was seeing the Lord arranging witnessing opportunities on flights and in the airport. Here’s a summary:

On my first flight, I began chatting with the couple next to me who were about my parents’ age. I explained that I was going to a Christian youth camp. They thought that was really nice and I wondered if they were Christians.

“Do you have a spiritual background?” I asked them.

Now, if I wouldn’t have asked that first question, the conversation may have never really taken off. But after that question, we talked for about 20-30 minutes about spiritual things. It was a reminder to just ask a question and see what God does with it!

“We’re Episcopalian,” he told me.
“Oh, on one of my last flights (last summer) I also sat next to an Episcopalian!” I told him. “But I don’t know too much about it…”

He explained the Episcopalian history, saying it has similarities to Catholicism but without a pope. I brought up the issue of salvation by faith or works. “What are your thoughts on that?” I asked. He believed we were saved by both faith and works.

“Could I get your opinion on something? Are you familiar with Ephesians 2:8-9? What do you think it means?”

I handed him my Bible and he took about a minute reading the passage. He came up with an explanation of the passage to go along with his viewpoint, but it was a pretty big stretch. It was also very clear to me at that point that he simply did not understand the gospel! He called the “gift” in Ephesians 2:8 “mysterious” saying something like, “whatever that mysterious gift is, it works itself out in our works… does that make sense?” he asked me.
“No, not really…” I replied.
He explained it again. Then he went on to explain, “You know, one thing our church is really big on is tolerance … ”

I told him I think it’s important to accept and love people, but at the same time, Jesus said in John 14:6, “I am the way, the truth and the life—no one comes to the Father but by Me.”

“You will probably think about that verse 100,000 times in your life,” he replied, “And each time your thinking will evolve and it will mean something different to you…”

“But, you know, it can really only mean one thing!” I said.

He replied, “I read the Bible very differently now than I did fifty years ago. I have friends who are very rigid in their understanding of Scripture, but …” and he went on to explain that we all have our own interpretation and lifestyle.

“Well,” I said, “When we look at Hitler and what he did, we can’t just say ‘that was fine for him.’ There is a point when someone is just wrong!”

The whole conversation was very gracious and respectful, but I do think that a nerve was pricked. He seemed slightly uncomfortable after a bit, and I think that was a good thing. It’s sad how far he is from Christ. He is simply blind to the truth of the gospel. But I am grateful for the opportunity we had to interact, and I pray that the Lord opens his eyes.

Of course, my desire wasn’t to offend, but to help bring to light the truth that no matter how “good” one is, we are separated from God because of sin. God in His love has provided a way to be reconciled with Him through Jesus, but one will not come to Jesus in repentance if they do not see the need to do so. “But God, who is rich in mercy, because of His great love with which He loved us, even when we were dead in trespasses, made us alive together with Christ (by grace you have been saved)…” Ephesians 2:4-5

Upon arrival at the airport, I had two hours before being picked up as I was waiting for someone else to fly in also. After passing out tracts and having a seemingly not-to-productive, but friendly argument with a Jehovah’s Witness couple who had a table set up there, I prayed for the Lord to lead me to someone else to talk with.

Then I noticed a girl sitting alone by the door. I decided I’d do my questionnaire approach with her.

“I’m Catholic but I don’t know anything” she told me. She was 100% interested in talking, and thankfully, I had another 45 minutes before my ride came. Praise the Lord! I started back in Genesis [smile] and began to teach through from the beginning, and it was so sweet to see her desire to learn.
“I want to see Jesus” she told me.
“Me too!” I replied [smile].
I’d appreciate prayer for Gabrielle, that the Lord would bring other Christians along her path to continue to teach her.

Eastern Orthodox:
On my flight home, I had a very long conversation with the Eastern orthodox girl next to me. She had her earphones in, but when we were served snacks and she took them out, I realized, Here’s my chance! and asked her, “Where’s your accent from?”

I also asked her about her religious background. I was so glad I asked those questions, because they led to about an hour of discussion! She had a lot of thoughts and seemed eager to discuss them.

She was convinced that we have to work hard for our salvation. I took her to some verses in Scripture, but she was still firm. However, then SHE brought up two examples from Scripture which were perfect examples making my point! One was the thief on the cross, and the other was the publican/Pharisee prayers (the proud prayer and humble prayer). Those gave me wonderful spring boards to talk about how amazing the gospel is and how we cannot come to God boasting! She seemed deep in thought for a while. After that we began talking about various life issues and became better friends ….and we learned that we were also on the same next flight (from Minneapolis to Cedar Rapids) so we walked to our gate together, took turns watching each other’s stuff, shared a pizza… and decided to meet up for coffee sometime in the future since we live close. It was so special to become friends with her.

Although I often would prefer to just keep to myself and read, I try to remember that some of my best witnessing conversations have been on airplanes! And I’m always so excited when I see the Lord arrange those opportunities. Nothing is more fulfilling! As ambassadors of Christ, we are “on duty” every time we are in the presence of another human being – and that is a life full of blessing.