Emily and Jolynn have been working on some graphic design projects here in our office. The current project is updating the small Bright Lights binder. 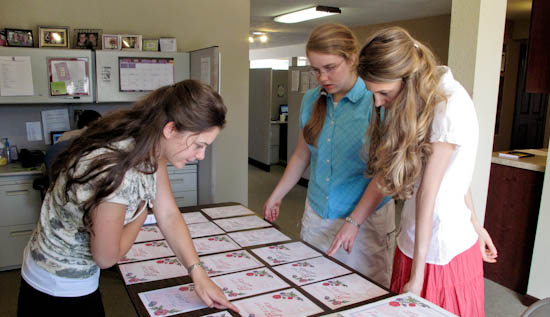 Emily has come up with about 50 different versions 🙂 but we now have it narrowed down to two!

We need to order them really soon, but if you would leave a comment and tell us which one you like better, we would really appreciate the help. For reference, here is a picture of the old binder: 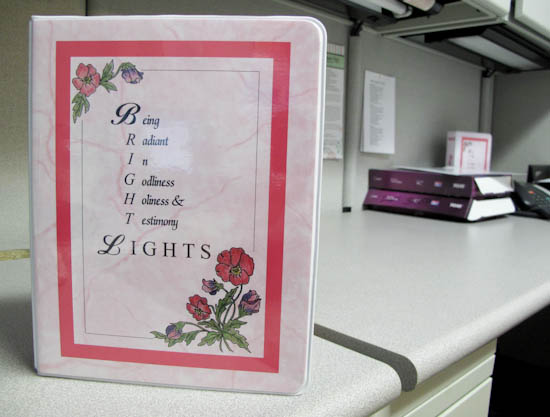 And here are the two new versions: 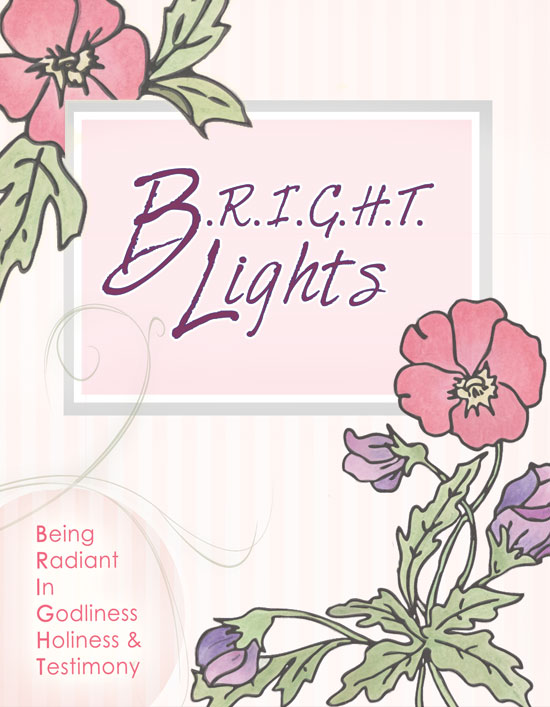 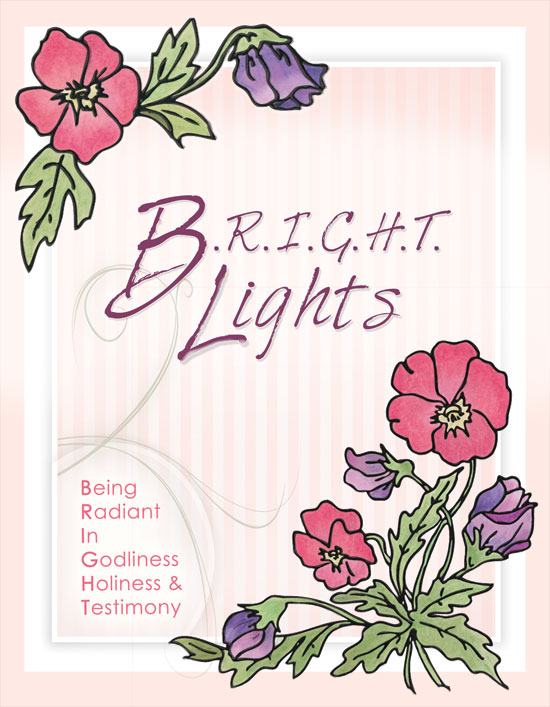 Which one do you like better between cover A and B?
(Also, if you have any additional suggestions or thoughts, feel free to share them.) Thanks!

The Strong in the Lord Conference here in Willoughby Hills, Ohio ended Wednesday evening. Thank you to all who prayed for the video taping. There was a lot of joy among our group as we learned how well the taping went and as we heard about the little miracles that happened behind the scenes on the technical side of things. The conference itself went very well and we have been so encouraged by the feedback.

The Radiant Purity conference here starts in a few hours.

Please pray that the Lord works in hearts and lives– that His kindness (Rom 2:4) leads many to make the decision to surrender entirely to Jesus. We’d appreciate prayer for the small group discussions, main sessions, singing, skits, and all the other behind the scenes details…

And thank you for all of you who have been praying for our team. In our team devotional time this morning, Sarah was mentioning to us how it was such a huge blessing that there has been such joy and love in the group even though many are quite tired by this time. It’s so refreshing to be in a group where the atmosphere is one of joy and praise to God vs complaining — and we definitely attribute this to God’s grace!

“And the Lord make you to increase and abound in love one toward another, and toward all men, even as we do toward you: To the end he may stablish your hearts unblameable in holiness before God, even our Father, at the coming of our Lord Jesus Christ with all his saints.” (1 Thess 3:12-13)

Stephen flew in three good friends who are very experienced with video (Andrew Baskerville from our town and Daniel and Samuel Roberts from Alabama) to tape the conference.

We would appreciate prayer about this. It is a major effort to gather the crew, set up all the equipment, practice the skits with the video crew, work through lots of misc. details, and finally shoot the conference. And all kinds of things can go wrong – from lighting to sound to equipment failures to missed lines or sickness or crying babies!

Please pray for us, and for the video crew. It would be so exciting to have this available to reach more young ladies. We can’t go to more than six cities a year for live Bright Lights conferences but with video each Bright Lights group would be able to host their own small conference.

“Thy God hath commanded thy strength: strengthen, O God, that which thou hast wrought for us.” Psalm 68:28

The conferences in Pennsylvania last week were very encouraging. The church was wonderful to work with, and we saw the Lord’s hand work in many lives.

It’s been wonderful having such a great team of leaders helping us. One of the highlights is the time of sharing from the Word and prayer that we have as a group. Here was one of our prayer times last week. It’s such a huge blessing to have so many girls lead the conferences who love the Lord so much.

Please join us in praying that the next two conferences here in Ohio go well. The Strong in the Lord conference starts tomorrow night and the Purity Conference is on the weekend.

Here are the two vans in which we pretty much just spent the last couple of days. It is a long way from Iowa to Collegeville, Pennsylvania!

The van I was in left a day early and took a southern route so we could go to the Creation Museum. Part way into the trip, my dad remembered that we were supposed to pick up boxes of Bright Lights sets from our printer in Indiana to take to the conferences. So the girls found all kinds of interesting uses for the unexpected boxes…slept against them, named them, used the tops of them for storing food and clothes…

And even for transporting a turtle… 🙂 which we found in the middle of the road at the Creation Museum exit.

We had to let the turtle go, though, when we went into the Creation Museum, so it wouldn’t be in the hot van all day.

This is one of our family’s favorite quotes in the Creation Museum. 🙂

The museum is continuing to expand the petting zoo, and *personality* is something the animals don’t seem to lack! The animal on the left is an alpaca-llama cross. (Sort of like the “Zonkey” they own which is a zebra/donkey cross) Nice hair cut, huh? *smile*

I love Gomer’s expressions. Who’s going to ride me next?

Since half the group took a southern route to go to the Museum, we planned to meet up with the other van (and trailer) while driving through Pennsylvania on Sunday. We just weren’t expecting that the location of our rendezvous point would be on the side of the road with a flat trailer tire. But thanks to God’s provision, all was taken care of.

It added about 3 hours to the trip, but if a flat tire is the only thing that went wrong, I’d say we did pretty well. 🙂 We arrived at the church at about 10pm.

And even after that LONG day in the van, Mary is still smiling!

And thank you to Melodie for taking most of the pictures in this post.

“Let us be glad and rejoice, and give honour to Him…” Revelation 19:7

Register online or at the door. See Upcoming Conference Page for more details.

I thought I’d post a few more pictures from our last set of conferences in Oshkosh, Wisconsin and Omaha, Nebraska.

Sarah sharing about guarding your heart

The kitchen always becomes the popular gathering place for our team of leaders. Here we are eating bran muffins and smoothies brought over by Mrs. Kolar, who hosted the conference.

We really appreciated Lindsay (left) and her very sweet and enthusiastic Bright Lights group. They brought our team some snacks one afternoon.

…and we REALLY enjoyed them. Right, Lilly? 🙂

We also really appreciated the families that hosted the conferences in Wisconsin! Here is our team with several girls from Serena Kamp’s Bright Lights group at a 4th of July cookout.

On the 4th of July our group of leaders (about 20 girls) went to a local small town parade and passed out our little tracts called “The Price of Liberty” about how just as our freedom was purchased through the blood of soldiers who gave their lives, our spiritual freedom with God was purchased through the blood of Jesus Christ. Hannah (red shirt) got into a very good conversation with these girls about the gospel and how one can know they have peace with God.

Here is the shower schedule for our team of leaders. It’s a little different living with 15-20 girls for two weeks! But we don’t know what we would do without the great team of girls that God has brought together to help us lead the conferences. We have a lot of good times together!

We also appreciated many girls who were local to the area who helped as assistants on small groups.

And THIS is the spider that gave me and Nickie a very…um…exciting wake-up one morning. It looked quite a bit bigger with it was alive and standing up just inches from Nickie’s pillow.

All in all, it was a wonderful trip and we are looking forward to seeing what God has in store for our next trip to Pennslyvania and Ohio. We are leaving in three days now!