Nickie Biegler and I volunteered at the Creation Museum for a few days to help with all the Christmas activities. The live nativity–which was actually more like “live town of Bethlehem”– was very well done. 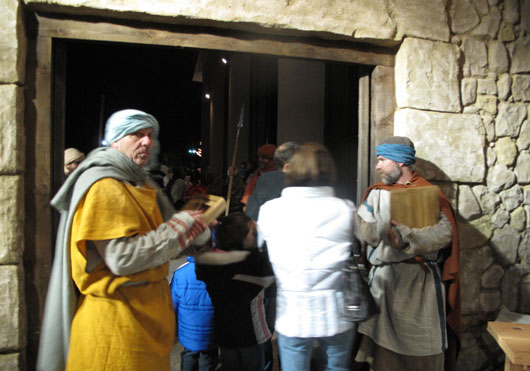 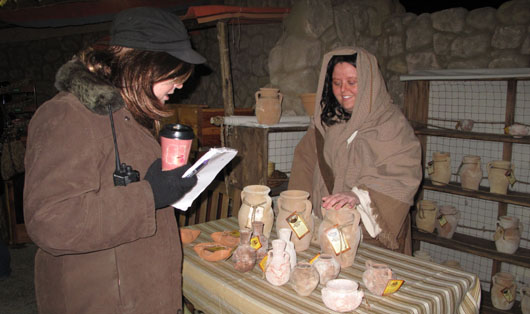 One of the Bethlehem merchants selling her goods… 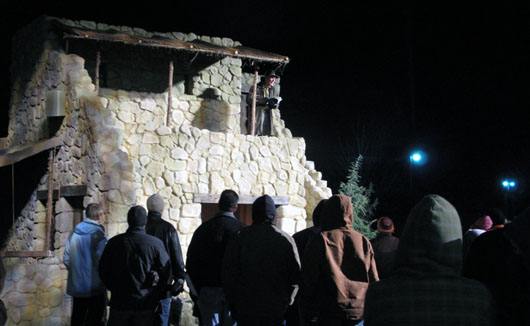 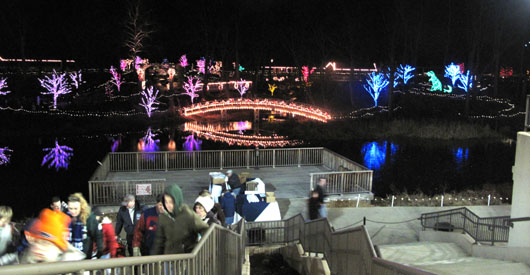 The museum grounds were lit up beautifully 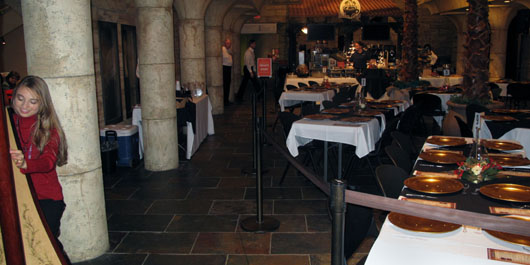 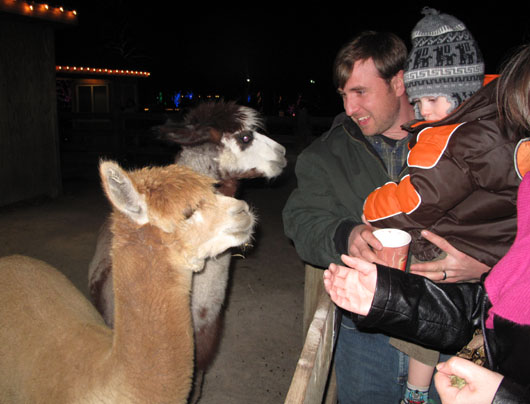 The petting zoo, filled with unique animals (with unique personalities), was a big highlight 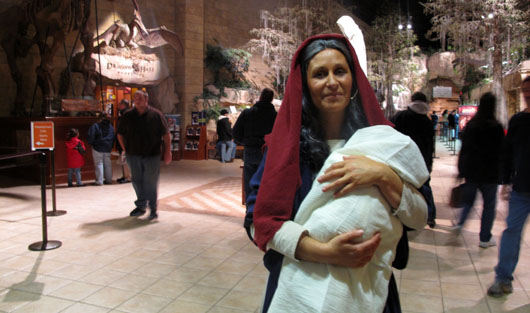 Elizabeth, Zacharias’s wife (Christian Actress Geri Campbell) told her whole story to everyone in the Special Effects theater. Nickie and I were assigned to outdoor positions so we couldn’t come see it, but my dad was very impressed with the presentation. 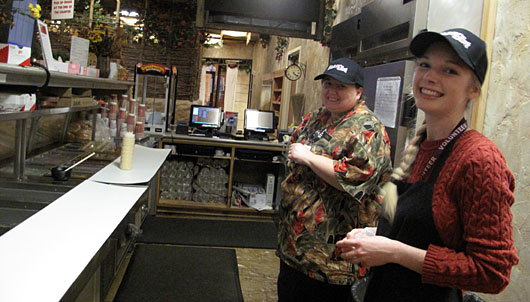 Here’s Nickie working “on the line” at Noah’s Cafe…making sandwhiches, wraps, etc. as people order them. This was a fun job. 🙂

“When you are working for the Lord, it never gets boring” one of the ladies in the kitchen told me. I’m always blessed by being around museum staff. There is a unique fellowship that takes place among them as they do their work for the Lord.

If you live in the area, by all means go see “Bethlehem’s Blessings”. There are a few more evenings left: December 29th, January 1st, and January 2nd.

Also, be in prayer for the Creation Museum and their staff. The Lord is using them greatly and they need perseverance and encouragement!

As we were gearing up to open our store, it has been encouraging to see God answer prayer and provide. Here are two of those ways: 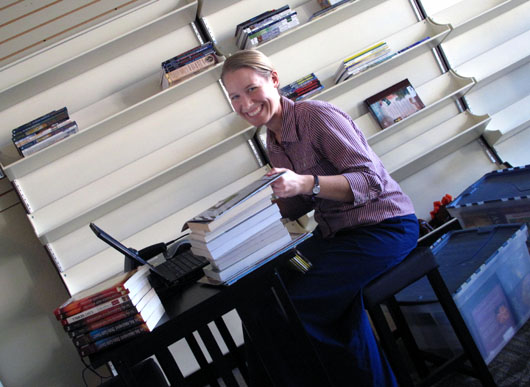 Kelly, a good friend from Minnesota, volunteered at the Bright Lights office for several weeks in October and November. She spent hours entering our expanding bookstore inventory into our computer sales software. We didn’t realize what a huge job this was going to be. Kelly “happened” to be here exactly at the time we needed it done.

How are we going to find furniture for the bookstore?? we wondered. I dreamed of a comfy beige leather couch, but after looking at a few price tags, I knew we’d never buy one. But actually, I did know how we would get furniture. Just the same way we got everything else–on our knees. So we took this need to the Lord.
A couple weeks ago when friends at church asked me how the bookstore was coming along, I mentioned the current need for furniture.
“I need to talk to your dad about that,” a friend, Carlos, replied.
The next day we picked up this beautiful couch from Carlos’ storage unit. Free. And it’s beige and leather… just what I had hoped for. And it matches perfectly with the color of the walls. Carlos also gave us two chairs and some end tables. Wow! Another encouraging reminder that it’s always worth it to wait for the Lord’s provision!

“But my God shall supply all your need according to his riches in glory by Christ Jesus.” Philippians 4:19

Our website has finally been “revamped”! This is a project we’ve been working on for a long time. It’s hard to believe it’s actually up. 🙂
See www.brothersandsisters.net

There are new pages, new photos, new resources, and information about our new store, Noah’s Archive, with a gigapan picture to explore (use the tools in the left hand corner of the picture to zoom and pan).

We’re grateful to God for the ways He answered prayer at many little steps all along the way as we were working on this project. Our prayer now is that the website would honor the Lord and provide clear information and resources to strengthen families in Christ.

Stephen taking pictures of Bright Lights material for the website

We decided to enter via our front doors this morning.

An imaginary blizzard whirled in the auditorium at Bright Lights last night, forcing each small group to huddle together inside their little Israeli towns (i.e. their circle of chairs) . Because of the blizzard, the only means of communication was to write letters and mail them via “the Christmas train”. Each town’s goal was to collect clues from the other teams (er-towns) and figure out seven key reasons why Jesus was born.
“Hurry–the train is coming, the train is coming!” the girls would shout to their teams as they finished writing more notes to send to the other towns….it was a lot of fun.

Light Shop (Stephen’s discipleship group) did the same activity, and, from what I hear, the young men weren’t quite as successful at collecting clues, but they were definitely more successful at keeping their train operating properly. 🙂

We are grateful to our innovative dad who had the idea (though he claims it was a group effort) and made the trains out of cardboard boxes yesterday afternoon.

For the lesson time, Sarah taught the girls downstairs while the older girls studied the Scriptural accounts of a few of the Christmas characters (plus John the Baptist) upstairs.

Here’s a short synopsis of our discussion:

Elisabeth: Elisabeth’s barrenness must have been a huge trial in her life–especially in that culture and time. But God was obviously using it as a tool to prepare her for the exciting task he was going to give her. The trials in our life that we don’t understand may actually be God’s hand of preparation for a special work He has called us to do.

John the Baptist: John was an amazing combination of great humility and great boldness. We think there is a connection there. He was able to be so bold because he was so humble and didn’t care about his personal reputation or status among men.

Anna: Looking closely at the life of Anna in the temple, we see how she went through some very tough times in her earlier years! Even though she lost her husband after only 7 years of marriage, she didn’t become bitter but instead used the trial as a springboard to grow nearer to God and minister to His people. She didn’t have the security of a husband and children, but she had the security of the blessing of God on her life!

Mary: Though Mary certainly didn’t have an easy path, she set her eyes on the bigger picture–not on her own personal comfort or reputation. It is encouraging to see the Lord’s faithfulness to her at each step of the way! He gently communicated His plan to her through the angel, provided a godly man to walk along side her and care for her, and blessed and strengthened her through numerous people (Elisabeth, the shepherds, Anna and Simeon, the wise men, etc.), and protected her family from Herod’s sword.

Decorating a commercial building was a new experience for me — but at least it brings a little life to our, well, less-than-desirable exterior. 🙂 It was fun being on the roof. I love heights. (Not that our building is very high… 🙂 ).