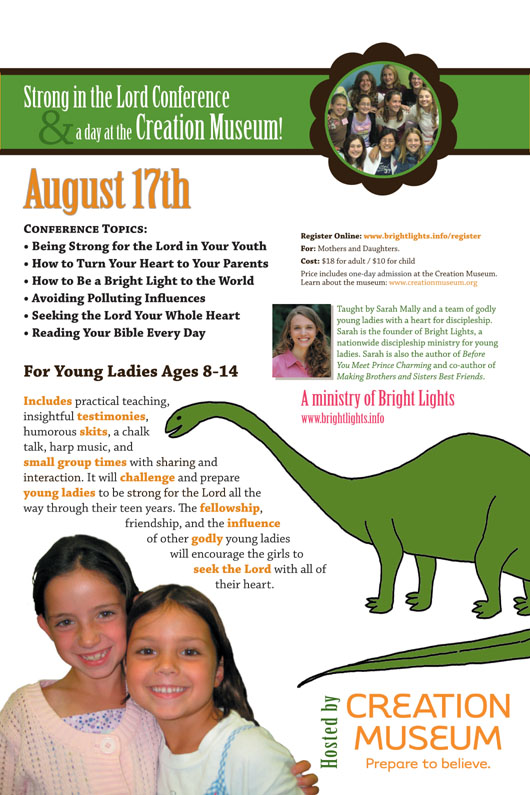 Includes: Three conference sessions in Special Effects Theater, two small group sessions in the Garden Pavilions, and the rest of the day to enjoy the museum and fellowship with other mothers and daughters. To learn more about the museum, visit www.creationmuseum.org

To register: click here. (Note: There is a limit of two hundred attendees at this conference.)

If you would like an informational e-mail about the conference to forward to friends from your church or homeschool group, contact us and we’ll send one to you.

To see information about other Bright Lights conferences planned for Ohio and Virginia in the beginning of August, click here.

Thanks so much for your prayers. The witnessing went very well last night. It was exciting to see the girls who came with us courageously stepping out and learning to initiate conversations with people. 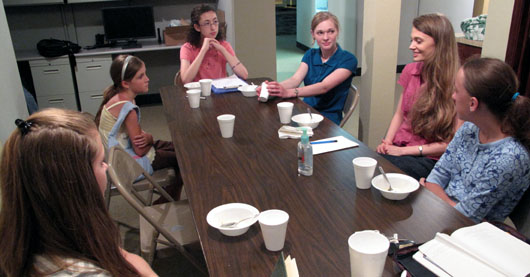 Afterward, as we were eating ice cream and sharing stories, we discovered we had collectively witnessed to over 50 people. (That’s more unsaved people than many churches have walk through their doors in a whole year!) It definitely seems to me that we are able to reach the most unsaved people when we go out to where they are and talk with them. We know that the Lord is the One who draws people to Himself, and we are just praying that He continues to work in these people’s lives.

Did you know that in some ways younger girls have an advantage when it comes to sharing the gospel? The reason is this: people are not intimidated by them! Instead, they are impressed by their maturity. If a few sweet, smiley young girls go to the park and take “surveys” (questions about the gospel), people are almost always willing to talk! This is great approach to initiate conversations about Jesus. (And if anyone would like to know what questions we ask in our surveys, feel free to e-mail and ask.)

Last Monday evening a group of young ladies from our Bright Lights group gathered here at the Bright Lights office for a class on evangelism. We discussed various ways to engage people in conversation using tracts, surveys, the “wordless bridge”, etc. Then we divided up and practiced witnessing to each other. I am so excited about their enthusiasm. 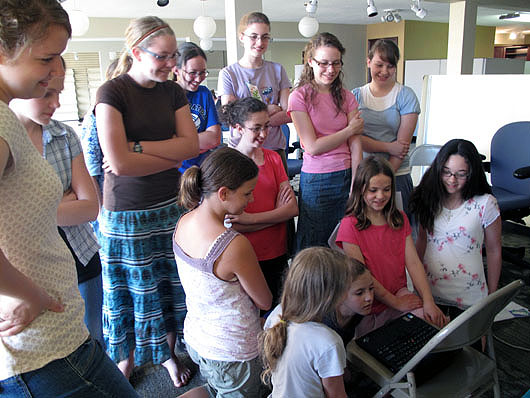 We also watched a little witnessing clip from Way of the Master to learn what to say to atheists.

We’d appreciate prayer tomorrow evening (the 25th) because several of us will be going out witnessing together in the town square. Please pray that the Lord would strengthen and empower each one of us to overcome fear and experience the joy of blessing others with the Good News.

“And Jesus…said, Verily I say unto you, ‘Except ye be converted, and become as little children, ye shall not enter into the kingdom of heaven.'” Matt 18:3

“Let no man despise thy youth; but be thou an example of the believers, in word, in conversation, in charity, in spirit, in faith, in purity.” 1 Tim 4:12

Timing makes a difference when you are passing out tracts! –Especially with cashiers. I really like this purse because I can quickly reach in the front flap, grab a tract, and say, “…and here’s something for you!” when the cashier gives me my receipt.

I also like this purse because I can fit so much stuff in it (as I was explaining to my dad and brother this morning, who didn’t seem to quite relate…).

Anyway, a friend from Living Waters recommended this to me, and I wanted to pass along the recommendation. Sometimes I’ve missed a good opportunity just because I couldn’t dig out a gospel tract fast enough. –But not with this purse!

So when we buy purses, let’s think “fishing” more than we think “fashion!”

Four Bright Lights Conferences scheduled for August!
We will be doing a Strong in the Lord Conference and a Radiant Purity Conference in Bristol, Virginia, and then we’ll repeat the same schedule in Pataskala, Ohio.

Because of a tight schedule, buying peaches at a stand while we stopped for gas was about as touristy as we got in Florida this year.

At the FPEA home school conference, it was exciting to visit with Bright Lights leaders and hear what God is doing in their groups. The mother in this picture hosts a BL group in her home. She told us that she was searching eveywhere for tea cups for the snack time and couldn’t find what she wanted. Then–out of the blue–a relative sent her a box of 30 old fashioned tea cups. Just what she had been looking for! And her relative didn’t even know she wanted them. Isn’t it encouraging to see the Lord provide in ways like this?!

Saturday morning before the conference started, Sarah and I met for coffee with Kelsy and Katherine, friends who run the Generations of Virtue booth. We see each other at a lot of the same conferences, and we have a lot of the similar messages, experiences, and passions that could keep us talking for hours if we had the time. They have also spent quite a bit of time in Singapore and Malaysia. It was neat to hear about the doors the Lord is opening for their ministry.

As I was washing my hands, I noticed the house-keeping lady was cleaning and restocking. Two rolls of toilet paper were rolling away from her on the floor, so I picked them up and handed them to her.
“Thank you, God bless you honey!” she said with surprise.
“Oh, you are welcome. Thank you for keeping the restrooms so clean!” I said.
“Oh, bless you, honey….aw, can I give you a hug?” she asked.
She gave me a hug and her business card so I could e-mail her boss and tell her that the restrooms were clean. I said I would.
Then I pulled out a 10 commandments coin and gave it to her.
“And what is this?” she asked.
“This is a coin with the 10 commandments. The 10 Commandments show us our sin. We need God’s forgiveness. He will cleanse us from our sin if we ask because Jesus died on the cross for us. Many people pray, but they never ask God for eternal life. But it’s a free gift He will give to those who ask.”
Tears began to stream down her eyes. I was so surprised, and I hardly knew how to react! I only said a few words – why was she so touched? I figured the Lord must have been touching her through me somehow. She thanked me heartily and told me she would go to the website on the tract. (www.needgod.com) May the Lord continue the work he began in her life!

After the Florida Homeschool Conference was over, we talked until midnight at a restaurant with the vendors from the ICR (Institute for Creation Research) booth. It was a good time of building new friendships with great people.

As my dad was pumping gas at this station, I handed an employee a tract while she was restocking candy bars. After I explained what it was, I asked her what her “religious background” was and we began chatting about spiritual things. She told me, “I don’t think anyone’s going to hell. Actually, I don’t think there is a hell.”
“Oh really? So you don’t believe the Bible, then? Because the Bible talks about hell.”
“Oh yeah, well I believe the Bible, but I still think everyone’s going to Heaven.”
“So Hitler is in Heaven…?” I asked.
“Oh no, I guess he’s probably not,” she said.
“Ok, but you just said you didn’t believe in hell.”
“Well, I do for some people, I guess,” she said.
This may seem humorous, but it’s just an example of how many people think! It’s like this deadly delusion that’s blinding Americans today. They don’t believe in hell, or even if they do, they are sure they’d be good enough for Heaven. People need to be awakened to reality before it’s too late! What if you had cancer, but your doctor didn’t tell you?! What if he was afraid of offending you so he simply told you that you might not feel very good for a while? You wouldn’t be very motivated to find a cure because you wouldn’t know the deadly reality of your disease.

If we truly care about people, we will show them what God says in the Bible: that sin is deadly, and it leads to hell –separation from God. God offers a cure, (He did the most loving thing possible to save us from hell!) but He only gives the “cure” to those who ask for it. John 3:16 He doesn’t force people to come to Him. True love isn’t forced.

We had a pretty good talk there in the candy bar aisle, and when I left she told me she was definitely going to pass the little tract around to all the employees at the gas station!
It’s a lie we believe that “people don’t want you to give them a tract”.