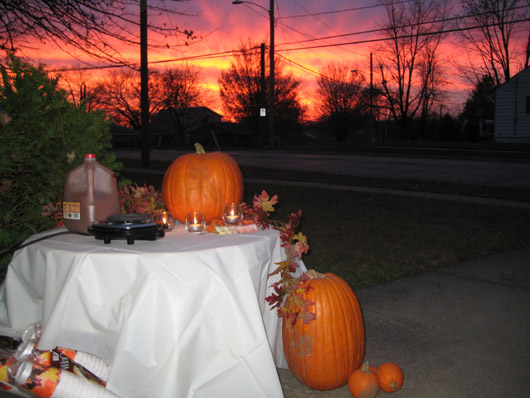 As the sun was setting last night, everyone from our Bible chapel came out and enjoyed a big Thanksgiving feast together. Hot apple cider was served at the door. 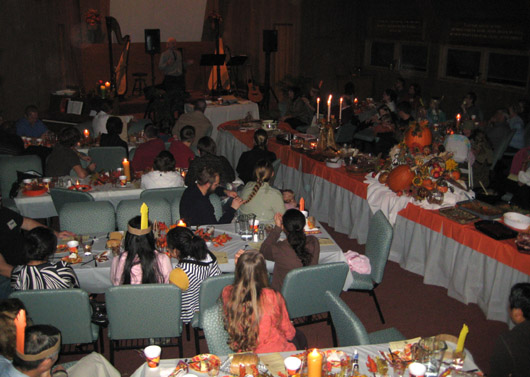 It was a very special evening. Good testimonies, fellowship, special music, great food, lots of smiles and enthusiasm. I love the way our little group operates and feels like a family. We are thankful for the strong fellowship and good spirit we have in our little church. One of the elements that continually bonds and strengthens our group is our weekly breaking of bread meeting. 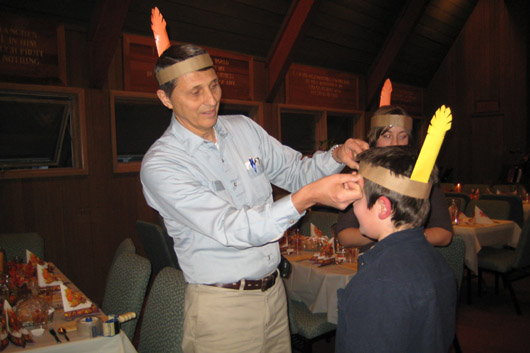 My dad said we couldn’t have a Thanksgiving without Indians, so he turned several of us into Indians to enhance the atmosphere. 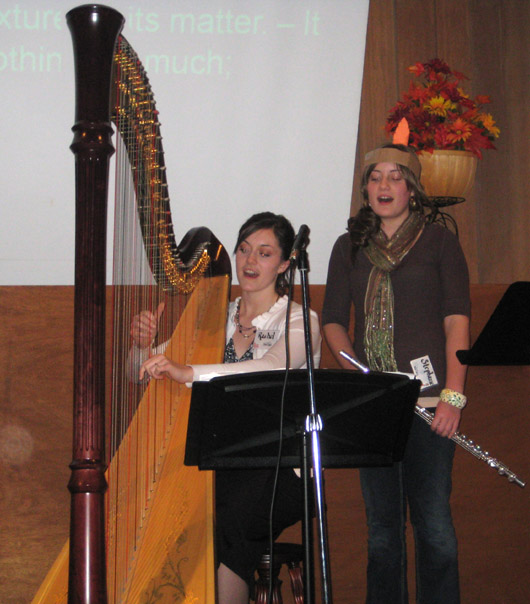 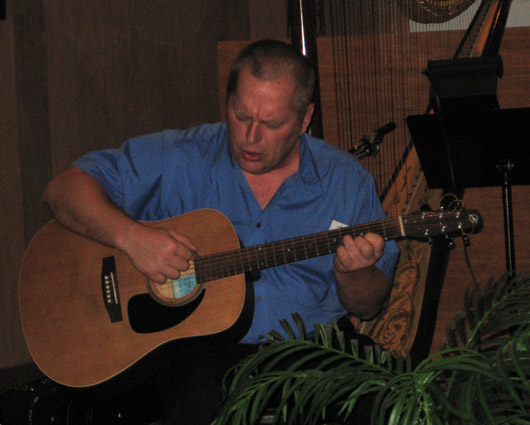 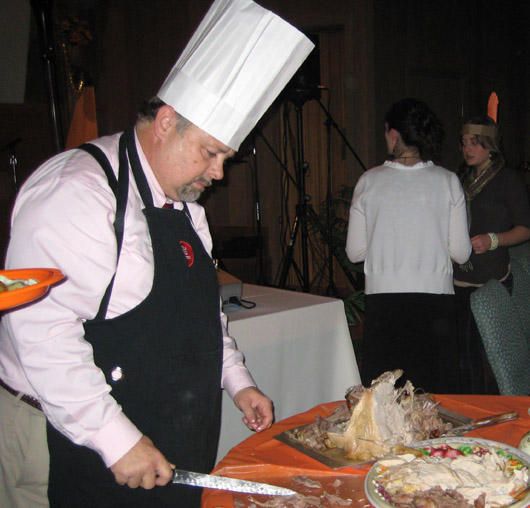 Mr. Woodhouse, one of the elders at our church, carving the turkey. 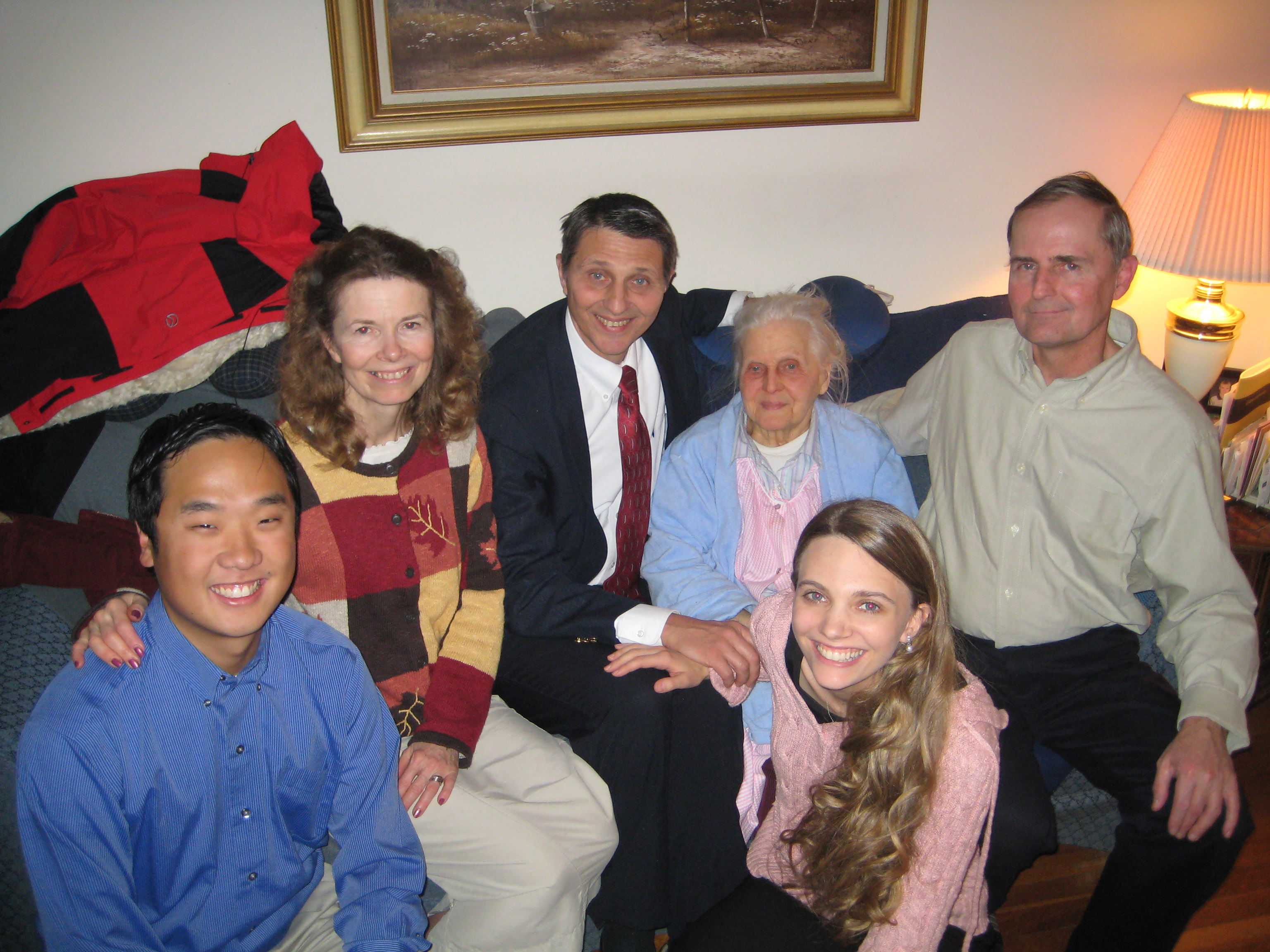 Yesterday we took a one day trip into Chicago and were able to see my dad’s cousin and aunt. Auntie Sue is now 95 and has many stories to tell about growing up in downtown Chicago in the 1910’s and 20’s. We always enjoy stopping in at her house when we are in the Chicago area. One of her favorite topics is to tell stories about the “Mally Store”, a general store / ice cream shop that my great grandparents owned downtown Chicago from the 1880’s-1950’s. 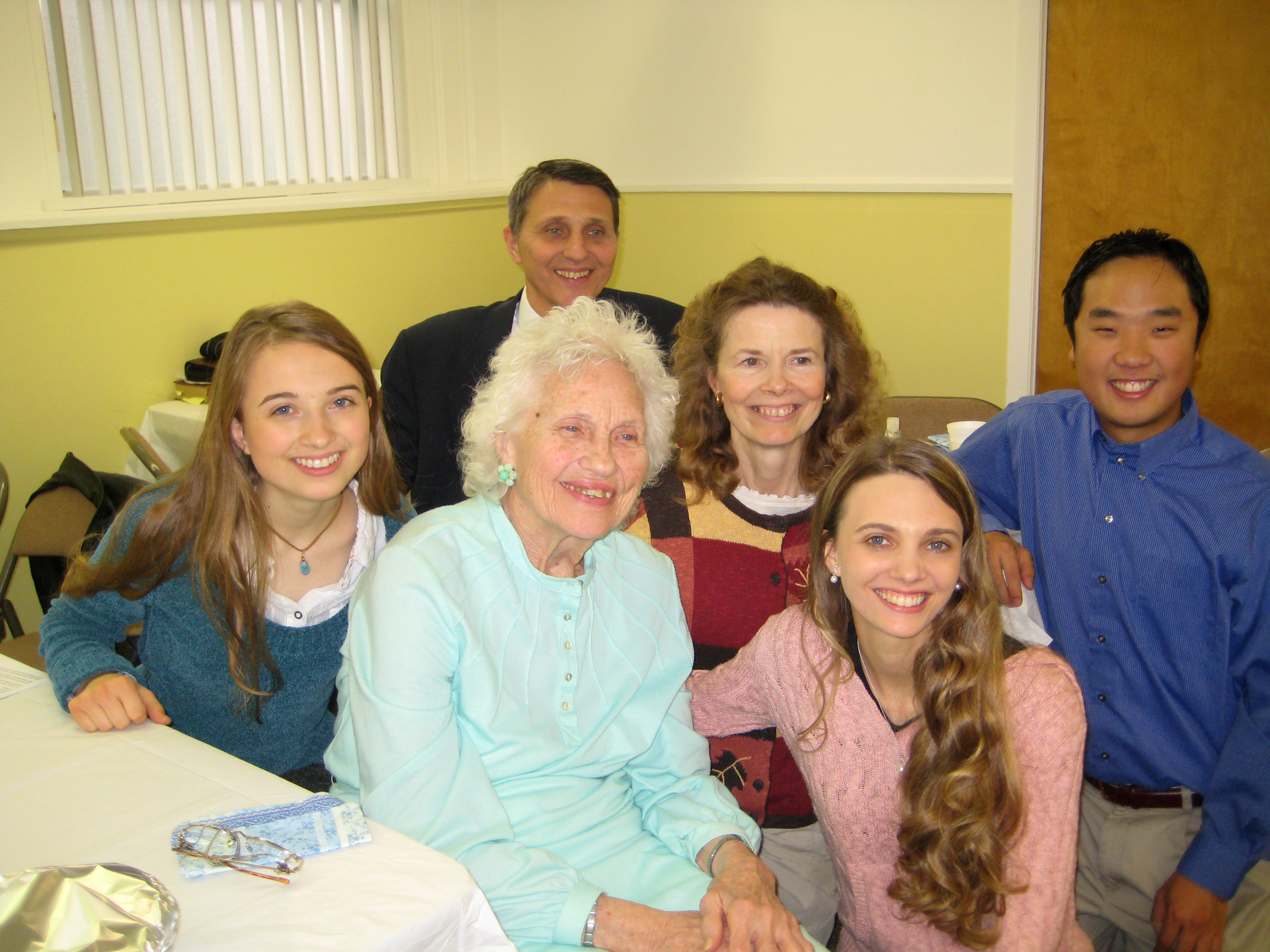 Earlier in the day we attended the church that my dad grew up in and saw many old friends, including Mrs. Knecht, who has been our adopted “Grandma” in Chicago since my dad’s mother died. The church had planned a special service for her, thanking her for her many years of faithfulness. Mrs. Knecht was my dad’s first Sunday School Teacher.

Marion Hills Bible Church was started by a Moody graduate in the 1950’s. Since it was only three blocks from my dad’s house growing up, his family began attending. It was through that little church that his whole family was saved. 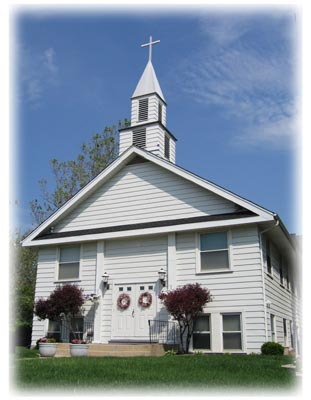 We are grateful to the Lord for this little church and the faithful believers who started it and have maintained a consistent light in the community. It laid a strong spiritual foundation in my dad’s life. It has also been a source of fellowship and encouragement to our family through the years. 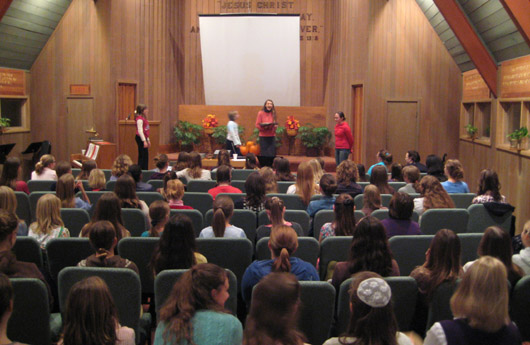 Sarah taught about the dangers of the internet, especially about how it can waste our time. 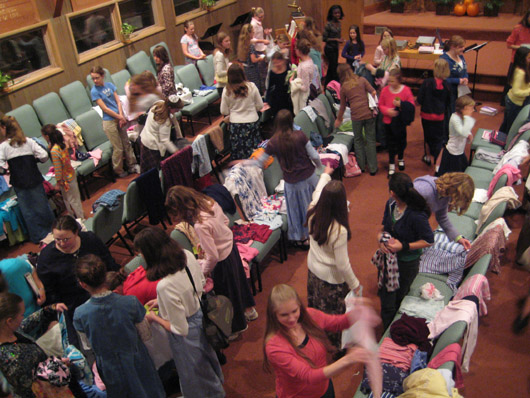 We did a “clothes exchange” for our activity afterwards. (This activity is often requested by our girls. 🙂 ) It’s hard to find modest clothes in the stores! Everyone brings a stack of clothes they don’t want anymore, and we buy and sell from each other using fake money.

The other night while Sarah and I were raking the leaves in our yard, three boys came walking down the street. They were in their early teens and were trying to act cool. It crossed my mind that maybe I should witness to them, but I wasn’t sure if I should stop them as they were walking.
About a half hour later, Sarah and I decided to go running since the weather was so nice. As we walked through the nearby park headed toward the trail, guess who was there by the merry-go-round? The same three boys.

As I was wondering again whether I should witness to them, one of them called to me.
“Hey, will you go get me my shoe? It’s over there!” he said, pointing to the soccer field.
“Sure,” I said and brought him his shoe.
“I’m lazy,” he said.
His friends laughed at him. “That’s so weird you just ask a stranger like that to get your shoe.”
“Ok,” I said, “since I got your shoe for you, will you answer a question for me?”
“Sure,” he replied.
“It’s actually a series of questions,” I told him.
He and his friends looked at me curiously, glad for some entertainment. (Sarah and I enjoy talking with young teenagers because we can be straight forward with them and they don’t get offended.)
“Do you consider yourself to be a good person?” I asked.
One said “yes”, another said “no”, and the third said “sometimes.”
“So have you ever lied?” I questioned.
“Yes,” they all answered.
“Have you ever stolen anything?” I asked.
“Yes,” said two of them.
“No,” said the other.
“YES YOU HAVE!” his friends corrected him.
“So if you’ve lied, what does that make you?” I asked.
“A liar” they replied.
“And if you’ve stolen something, what does that make you?”
“A stealer,” one guy said.
“A THIEF,” the other guy corrected him.
We laughed.
“Ok, have you ever been disrespectful to your parents?” I continued, smiling.
“Oh yeah,” they all answered emphatically.
“And have you ever been angry with your brother?” I asked.
“Uh, yeah,” they answered with a tone of voice like, that was a no brainer.
“Ok,” I said, “Those are all from the 10 commandments—the law God gave us. So let’s say you get hit by a car today, and stand before God, and he asks you why He should let you into Heaven. What would you say?”
“I’m an atheist,” said one kid.
“Ok, well, I’m asking the questions to your friends,” I told him.
“I don’t like questions like that!” his friend, Reese, said. “If I stood before God….He’d probably squish me!”
“So what would you say?” we asked.
“Uh…” Reese responded, “I’ll make You cookies!”
“So if you were standing before God,” we clarified, you’d say, “‘Here, I made you cookies!”
“Yep!” he joked.
“So,” we continued, “if you were standing before a judge because you had murdered someone, the judge couldn’t just let you go because you were sorry, could he? He wouldn’t be a good judge if he did that! And he wouldn’t let you go because you make him cookies either…”

Although initially they were just all acting silly, Reese began listening and becoming more serious, so we continued.

“Let’s say you had a fine of $1,000,000 and you couldn’t pay it. Then imagine that a stranger just walks up, pulls out his wallet, and pays your fine. What would your response be to that person?

“I’d be like, shocked. And I’d probably cry,” Reese answered.
“And would you take the gift?”
He quickly nodded and said he would.
I explained how that is exactly what Jesus did for us. I told them that most people know that Jesus died on the cross, but they don’t really understand why.

One of the boys said, “This is really funny because my church just taught this exact thing last Sunday.”

“Hmm…maybe God’s trying to get through to you,” I remarked.

“So I have another question,” I told them.
“If you had a chance to ask God one question, what would it be?”
They all began to talk at once.
“How is it that God, like, never started? I mean, wasn’t he ever born? It’s so weird, like, he doesn’t have a birthday?”
“Well, if you could fully understand Him, he wouldn’t be much of a God would he?” we said and explained a little about what infinity means.
“How do you know God is really really big? Maybe he’s really small!” he said, squinting and forming an inch between his thumb and finger.
“Well, it’s interesting you say that,” I mentioned, “because God did choose to become small when he became a man.”
“How do you know God was a man and not a woman?” another kid asked.
“Uh, because he called Himself a he and God doesn’t lie,” we said.
“How do you know the Bible is true? And was it written by God? Or, wasn’t it written by the disciples?”
We explained that God wrote it through the disciples. Sarah told them some facts about how the Bible was written over 1,500 years on 3 continents, in 3 languages, yet it all fits perfectly together. We also mentioned prophecies, etc.

“Yes, there are a lot of different religions, but we know they can’t all be true because they say very different things. And one thing about Christianity that’s different from all the other religions is that Jesus rose from the dead. Buddha and Mohammed and other religious leaders died.”
“Buddha is cool!” one kid said.
We talked a little more about Buddha and then they said they had to go.
I gave them each a 10 commandments coin. (Btw, coins work great for carrying in your pocket. I used to carry tracts in my pocket but they’d always get wrinkled.)
We told them to go to the website www.needgod.com and do the little survey on there.

No matter how silly they were, these kids also had real questions. They needed answers. It’s a lie that people don’t want to talk about spiritual things. People out there have questions! And they enjoy the excitement of talking to someone about their questions.

On our way back from running, they were still there, along with 2 girls.
Should we just walk by or should we say something else to them? I wondered.
“Hey, ask your questions to her!” Reese called, pointing to a girl.
“No, please don’t, it’s getting annoying,” the atheist kid said.
“Can she have one of the silver thingies?” Reese asked.
“Sure, I’ll go get one and bring it down”, I told them.
“Thank you!!”

I went to my house and came back with several more tracts. I did a little IQ quiz with the girl that then led into the gospel. She seemed to be interested and she thanked me.
I brought an athiest quiz down for the boy who claimed to be an atheist and asked if he wanted it.
He didn’t.
“YES HE DOES!” Reese said and made him take it.
I left them all with a few more coins, and thanked God for opening the door by causing Reese to ask me to get his shoe.

It really encourages me to realize that this is all something God does. He prepares hearts, puts us in the right place at the right time, opens doors (in unusual ways sometimes!), guides conversations, and then causes seeds to be watered and grow. Please pray that these young people would seek after God.