Monday nights are our “Bright Lights Nights” here in town. We meet at our church about twice a month. One reason I like Bright Lights here in town is because we can see the girls on a regular basis and watch them grow in maturity and in their walk with the Lord. As the Lord works in their hearts, it comes out in their bright countenances as well as in the insightful comments they make and good questions they ask!

Some girls are still coming who came to the very first Bright Lights meeting 11 years ago, so we have quite an age span now.

Last night after our singing time, Sarah taught the younger girls down stairs on “Rebekah” from Genesis while the older girls did a study of spiritual gifts (from Romans 12) upstairs. After our lesson time, we always divide up into small groups (led by the older girls) for discussions and activities. And then, of course, we have snacks and fellowship. 🙂

Stephen’s group, the Light Shop meets at a different church a few minutes away. I’d post pictures of that, too, but unfortunately I’m never able to get there because of Bright Lights going on simulaneously. Maybe next time I’ll send my camera along with Dad. I hear they do activities that are much crazier then what we girls do. Last night they had some kind of a water war with hoses and ropes and milk jugs…I missed what the main point to the game was, but apparently they got drenched and they had lots of fun.

Sunday after church we had the Bontrager family for dinner, and we enjoyed a full house! They have 9 children, a heart for ministry, and they travel and sing as a family. It was a nice afternoon of fellowship…and we’re glad Stephen saved all his old legos! 🙂

We were blessed by the positive responses we received from these sweet girls who desire God’s best. Thank you to all of you who were praying. Here are a few responses I thought were especially encouraging:

The discussion groups were a place for the girls to “vent” their thoughts and questions about the topics presented in large group.

I don’t know what a Bright Lights conference would be without skits…we have a lot of fun with them. And we definitely keep Stephen busy! He’s kind of like the all-around tech support man that makes the conference happen.

Stephen can figure out how to work anything (I decided it was okay to brag about an older brother 🙂 ) so it makes us feel “secure” having him around (i.e. usually technical difficulties don’t last very long 🙂 ). God knew we really needed someone like that!

Before this conference, Stephen wired together his own phone system using 6 wireless landline phones with headsets for the video crew to use (Before they always used walki-talkis). It’s pretty cool, and we were a little surprised it actually worked. I think Stephen was a little surprised, too.

We have 3 more Radiant Purity Conferences coming up soon in OH and FL. Click here for details.

Left: Sarah and I eating lunch at our booth.
Right: Sarah speaking on “Raising Pure Daughters in a Generation of Darkness”

We were thankful to the Lord that everything went very smooth and we had a great weekend at the conference in Florida!
We stayed with the Russell family and they took great care of us. We also made lots of plans for the upcoming Bright Lights conference coming to Jacksonville, FL in November.

Of course, it’s always nice to be home again. This morning my mom unpacked my bags for me and organized my room while I was doing Bright Lights office work and helping Sarah answer e-mails. Wow, what a nice mom. 🙂

Yes, we are in Florida… again! Sarah and I flew down just for a few days to speak and bring our booktable to the Jacksonville, Florida homeschool conference. We came down again mainly to lay some groundwork and get the word out about the Bright Lights conferences we will be doing here in November.

After setting up our booth yesterday afternoon (all by ourselves without Stephen or my dad’s help… 🙁 ) Sarah spoke at a special Mother/Daughter tea. I didn’t mind tagging along. 🙂 Sarah spoke about how powerful it is when young people live fully for the Lord, surrender to God, and choose to be bright light in this darkening generation. 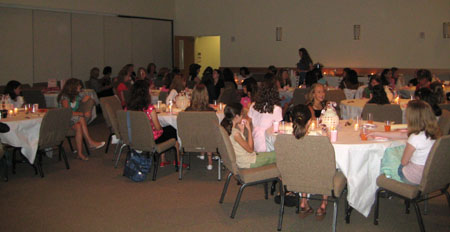 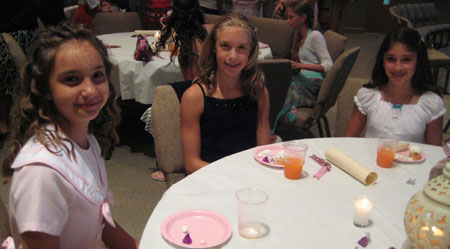 The atmosphere was very sweet with many girls evidently seeking the Lord and desiring His ways.

After the tea, we came back to the Russell’s house, the family who we have been staying with. Since they had some other friends over, I joined them in playing “kick the can”, hide and seek, and ultimate frisbee in the dark. Sarah joined us for the frisbee, but unfortunately she was on the other team and the other team won. Oh well. It felt really nice to “switch gears” and get all worn out and dirty from running around on a nice, humid, Florida night. 🙂

My friends Janae, Jessica, and Nickie

About a week ago, some friends and I were witnessing at the park, using a “survey” approach. Here is a story of one of our conversations…

“Hello! I’m taking a little survey. Would you be interested it taking it?” I asked 2 teenage girls as I approached them in the park about a week ago.
“Sure, why not?”
“Ok, great! The first question is: “Do you consider yourself to be a good person?” I asked.
“Uh…yeah I guess so” they answered.
“Okay” I smiled and continued, “How many of the 10 commandments can you name?”
One of the girls told the other “you name them.” A sheepish smile covered the other girl’s face as she tried to think of one. Finally, after putting their minds together, they thought of a few.
“So—have you ever told a lie?”
“Maybe once”
“What does that make you?” I asked them.
“Uh…A liar?”
“Have you ever been angry with your brothers or sisters?”
They smiled. “All the time,” they replied.
“Did you know that Jesus said that if we are angry with our brother, it’s considered as murder in God’s eyes?”
“Really??”
“You know,” I told them, “God’s standards are different from ours. God’s laws are the 10 commandments. You’ve already admitted to me that you’ve disobeyed some of His laws and we didn’t even go through the other ones! If you got hit by a car walking home tonight and God judged you by the 10 commandments, do you think you’d go to heaven or hell?”
“Hell,” they answered. I don’t think they had ever thought of it that way. I could see the seriousness in their eyes.
“Does that concern you?”
“Yeah”
I told them, “Actually, I am 100% sure I’m going to Heaven, but it’s not because I’m some great person or anything like that. It’s because God made a way! Would you like to know the way to be 100% sure you are going to Heaven?”

They said “yes,” so we sat down on the grass and I got my Bible out. Just then I was startled with a loud exclamation behind me. “Well, hello there, Grace!!!!! Remember me??? I saw you here last year!”
Oh no, I thought as I recalled the conversation I had with this lady last year. She was kind of loud and talkative and I thought she’d just be an interruption to this conversation.
And I was just getting in to the most important part! There must be spiritual warfare going on here.

“Uh, hi! Yeah, I do remember you.” I told her, “Would you like to sit down and listen to our conversation?”
“Yeah! Sure!!!” she said and sat down with us.

The next 10 minutes or so I went through the Romans road with these two girls. I had them read the verses and tell me what they thought it was saying. It encouraged me so much to watch them anxiously seeking to know the answer…to know how to be saved. One of the girls wiped a tear in her eye.
“So…” they asked me after reading Romans 10:9 , “that’s saying that you have to believe, and…”
“Yes” I answered, “and it’s just like a free gift. You simply have to ask and receive the gift of eternal life.”
“Have you ever prayed before?” I asked them.
“I pray every night.” The teary-eyed girl said. I think she was telling the truth, and I see how the Lord (who had heard those prayers) was now drawing her into His family.
“Would you like to pray now and ask the Lord for eternal life?
They hesitated. There were other people walking by. We might make a scene. I thought it would be great to make a prayer-meeting scene :), but I didn’t want to make them uncomfortable.
“We’ve never really prayed with other people before,” they said.
Just then the other lady (who had dropped in and was listening to our conversation) stated loudly, “Well, I think we should pray! I think prayer is always a good thing to do!”
“Ok, then, let’s pray.” I said, (realizing that the Lord was now using this lady’s presence for good!) “This is such an important decision, why put it off? Since you said you aren’t sure quite what to say would you like to repeat after me?”
“Sure” they all said, obviously serious about wanting to do this. “And it will make us feel better” they added.

I prayed and the 2 of them, plus the other lady, all repeated after me. I was so thrilled. I told them “You may not realize the significance of what you just did, but this is the most important decision of your life…Our life here is so short and what really matters is where we will spend eternity.”
They seemed to understand. But it struck me how much more they still needed to learn.
Since no one seemed to be in a hurry to leave, we continued our discussion for a little while. I explained why the Lord wants to save us. He wants to be our closest friend, and doesn’t want sin to separate us from Him anymore. I reviewed the story of Adam and Eve, gave them some Bible history, and told them to go home and read the book of John. I am hoping to get together with them again soon. The fact that the Lord allowed me and my friends the privilege of leading them into His family was a thought almost too wonderful to grasp. 🙂