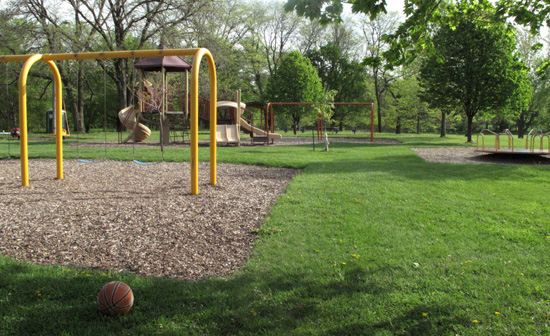 Sometimes it’s easy to make excuses not to witness when it doesn’t fit in perfectly with our schedule. But if Jesus was “about His Father’s business” when He was 12 (Luke 2:49), that should be our daily goal, too! (Big challenge to myself!) Thankfully, the Lord is faithful to guide and provide. A few weeks ago as I was driving home, I noticed some teens at the park by my house and wished I could witness to them. The only problem was that my mom said supper was going to be at 6:45 and it was already almost 7pm. But when I arrived home, my (flexible!) mom said it would be okay to wait, so I grabbed my purse and drove back to the park.

I approached a teenage girl walking towards the merry-go-round. “Here – something for you,” I told her, handing her this tract which has a picture of the Sun and the size of the earth in contrast. She thought it was cool and began looking at it right away. I asked her what she thought happened when we die. Before she could answer, a few of her friends joined the conversation so I gave each of them the same tract and asked them the same question.

Her friend with blue hair, Alexis, (about 13 yrs), looked really familiar. Then she exclaimed, “I’ve been running into this everywhere [people sharing the gospel] … at the mall, at Marion Downtown…”
“Well maybe God’s trying to get your attention!” I suggested.
“Yeah, maybe…” she agreed, “because I’ve stopped going to church.”

They all thought that you get to Heaven by “being good,” so I walked them through the 10 Commandments to see how good they really were. They all readily agreed that they had lied, stolen, lusted, taken God’s name in vain, and dishonored their parents. I could see the look of conviction in their eyes. They agreed with me that death could happen at anytime and the worst thing that could possibly happen to someone would be to go to hell.
“So if you died tonight, would you go to Heaven or Hell?” I asked them.
“I don’t know,” one girl said. (They weren’t offended by my question; they were intrigued. People appreciate truth when it’s spoken lovingly.)
Her friend turned to her and said, “I think you would go to Heaven. God forgives!”
“But if you were standing in court and had committed a crime,” I explained, “You couldn’t just say to the judge, ‘but won’t you just forgive me?’ and expect the judge to say ‘Okay, sure! Goodbye!’ could you? No, the judge has to punish the crime, right?! Otherwise he wouldn’t be a good judge! In the same way, God has to punish sin–-and the punishment for sin is hell.”
“Then everyone is going to hell,” they said.
“Except,” I clarified, “There is one Way—a narrow path—that God provided for those who want to go to Heaven.”
We continued talking. I didn’t want to give them the truth about Jesus until they were ready to receive it. I told them that the only reason I was talking to them was becuase I cared about them. They responded well to that.
Soon Josh interrupted, “So what’s this ‘path thing’, like, to Heaven, that you were talking about?” he asked with sincere urgency in his voice.
“Well,” I answered, “first we need to understand that we cannot get to Heaven on our own or by being ‘good enough.’”
“Yeah, I know that,” he agreed.

“Ok, well then, because God loved you, Josh,” I explained, “He decided to punish Himself for your sin. That’s why Jesus died on the cross. God became a man, Jesus, and died a horrible bloody death on the cross. And God put on Jesus your sin, and also the sin of the whole world.”
“That must have been pretty heavy,” Josh remarked.
“Yeah!” I agreed with a smile and continued to explain how Jesus rose again and is alive now and will come back one day.
“Ok,” Josh interrupted me again, anxiously, “I just need to know the way to get to Heaven. Do you have like, a pamphlet or anything that explains it?”
(Hmm… do I have a pamplet that explains it….?! )
“Ok, well to find the answer,” I told him, “You have to go to the Bible. Don’t trust what people tell you—you have to see what God says. And the Bible says, “For God so loved the world that He gave His only Son–” and then Josh began to quote along with me!
“You know John 3:16?” I asked in suprise, “Ok, well then you already know the answer: that whosever believes in Him should not perish…” I emphasized.
“Believes in Him” Josh repeated to himself, trying to understand what he needed to do.
“But it’s not simply ‘believing in God,’” I clarified, “Even demons believe that He exists—and tremble. It’s like putting on a parachute,” I explained. “You can believe the parachute will save you, but it won’t actually save you until you put it on. It’s the same way with Jesus. You have to trust what He did for you on the cross and ask Him to save you.”

I gave Josh some tracts and told him of a good website to go to.

Josh’s sincerity seemed to be rubbing off on the other three, too. They went from just being silly to asking me serious questions about Catholicism and some other things. I was surprised to learn that all three other girls also knew John 3:16. I told them, “You guys live in America and are so blessed to have this information about God and the way to Heaven. But if you keep rejecting it, there will come a time when it’s too late and there are no more chances.”
I instructed them that when they went to bed that night (or before) that they needed to get alone with God and ask Him for the gift of eternal life. They seemed to indicate that they would — especially Josh. I asked if I could pray for them right now and they wanted me to.

We talked about what it means to be “born” into God’s family, about the joy of knowing our Creator, about how being a Christian wasn’t always easy, and about how reading the Bible was a necessity. They also liked the idea of getting together for a group Bible study and entered my cell phone number into their cell phones. I assured them they could call or text me with any more questions.
“Thank you so much for talking with us!” they said warmly.

I arrived home at about 8pm to find that my (wonderful) family who had waited for me for dinner and was excited to hear the report. 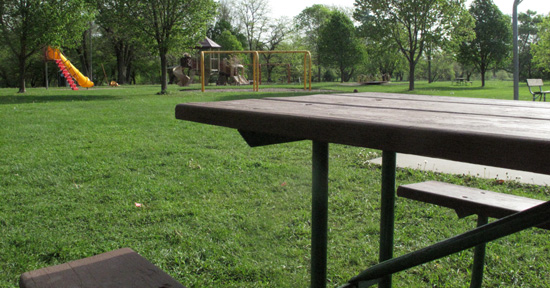 I was at the park again recently and noticed some kids eating sandwiches on the playground equipment. As I got closer I saw it was Josh and Alexis again!
“Hey guys!” I said.
They were very friendly. I asked them if they had thought more about what we talked about that one night.
They nodded “yes,” and Josh said, “I’ve just been trying to respect God a lot more in what I do…”
I wondered what he meant by that. I explained again about how Jesus told us we need to be “born again” and that it is usually a specific “one time occurrence” that someone asks God to save them. I asked if they had done that.
Josh told me that he had “asked God to be his Savior,” got baptized a few weeks ago, and has been reading his Bible. “Thank you again for talking with me that one night” he said, looking me in the eye.

I can’t say if Josh truly became a believer or not, but he certainly had a sincerity about him. I don’t think his church situation is very good and he certainly needs much more Christian influence in his life. I reminded Josh and Alexis that they needed to keep reading the Bible because it’s like food (“just like the sandwiches you are eating now”) and they need to read the Bible to grow.

Josh was also anxious to receive a “One Heartbeat Away” book. (And his friend Alexis asked him to pass the book to her when she was done with it.)

Please pray for Josh and Alexis!