How Many Ways Can We Use This?! 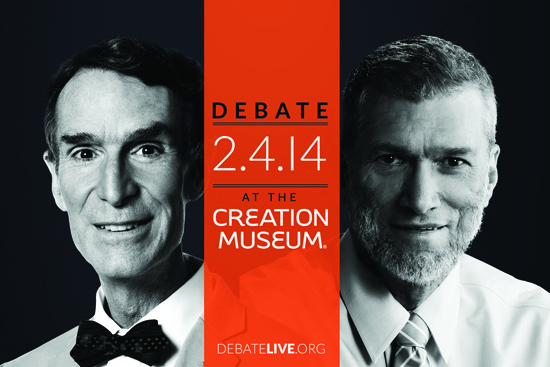 This morning as my dad was out shopping he had three different conversations with people about the debate.
“Have you heard of the big debate coming up?” he’d say.
Each person he asked responded with great interest, saying, “No, what big debate?”
“It’s between Ken Ham from the Creation Museum and Bill Nye the Science Guy.”
All three had heard of Bill Nye. Only one had heard of Ken Ham.
Then my dad continued, “It’s getting a lot of publicity because the creation/evolution issue is so critical. If evolution is true there is no standard for right and wrong. (People are just “animals” and we are all a big accident!) But if we are created by God, we are made in His image, for His purpose, and there is a standard for truth.”

Dad came back excited about his conversations and about the great “witnessing-conversation-starter” we have for the next twelve days! It’s easy to bring this up with anyone because it’s simply a news item. People like news and controversial debates.

We can share with people that the seating in the 900-seat auditorium sold out in 2 minutes because people are so interested in this debate! We can also share what today’s e-mail update from Answers in Genesis stated: “We already have registrations for an estimated 650,000 people attending in groups to watch the event.” (Wow, praise the Lord!)

And then, if people are interested to talk, we can then ask them, “Do you have any beliefs about the topic of origins and how we got here?” and pray that the Lord opens their heart to be willing to talk with us. Let’s not miss the good opportunity this debate provides us to speak of our Creator with people in the next week and a half. Let’s make the most of every opportunity (Ephesians 5:16).

What you can do:
-Print out and carry the little postcards with you so you can give it to those you talk with (cashiers, bank-tellers, waiters, neighbors, etc.).
-Pray for open doors for conversations.
-Consider live-streaming the event. (In your living room, church, a local university, or a community center…) There is still time—we still have twelve days. Answers in Genesis has provided posters.
-Sign up at www.debatelive.org to receive e-mail updates.
-Pray for others who are live-streaming the event, and for fruitful conversations afterward. The other night I was talking to a friend who is live-streaming it in a large room at his college and he’s very excited about how the Lord will use it.