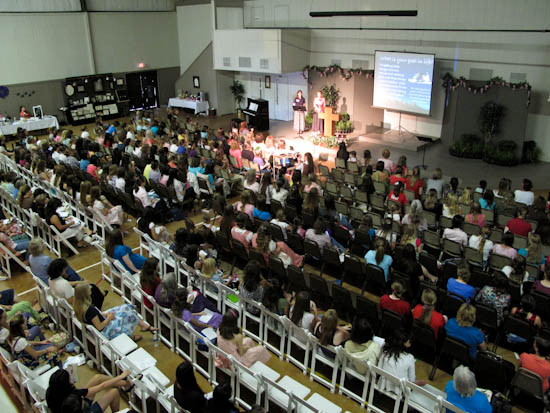 Last weekend Sarah and I spoke at a young ladies conference which our friends Taryn and Mirren Martin organized. 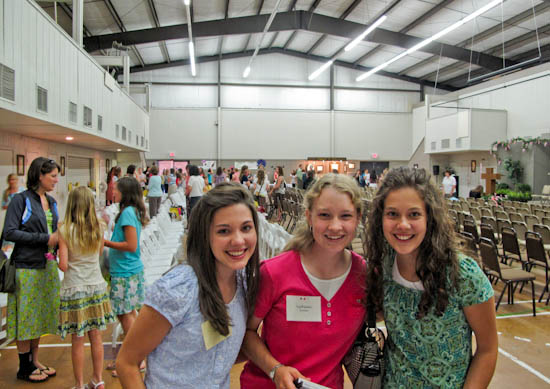 Conference attendees… “As iron sharpens iron, So a man sharpens the countenance of his friend.” Prov 27:17 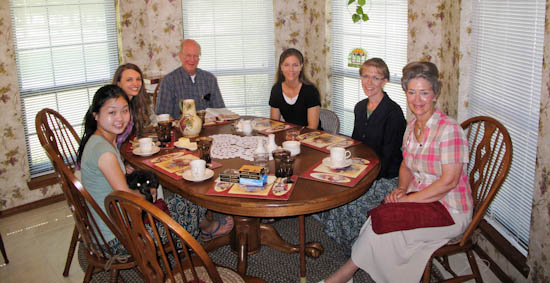 “There is gold and abundance of costly stones, but the lips of knowledge are a precious jewel.” Proverbs 20:15 I feel that this verse describes the Marins very well! Wisdom just flows out of them, and our talks with their family was definitely one of the highlights of the trip. Dr. Jobe Martin (Mirren and Taryn’s dad) has been teaching about creation, apologetics, prophecy, and many other topics for many years. Many of you have probably seen his DVDs called “Incredible Creatures.” They now have two new ones — “Creepers and Crawlers” and “Flight and Spike.” The Martins are faithful servants of the Lord and they have been presenting powerful messages. 400 moms and daughters attended the conference last weekend. It was a day and a half event and included a free lunch. 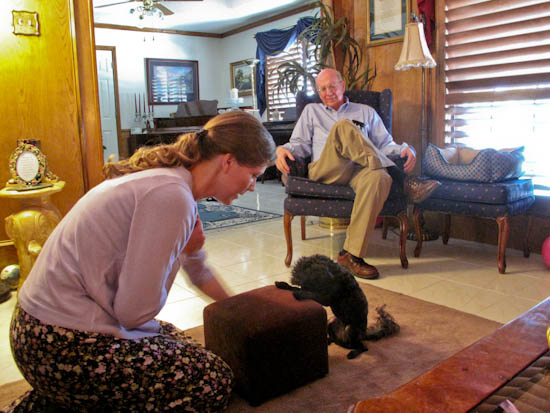 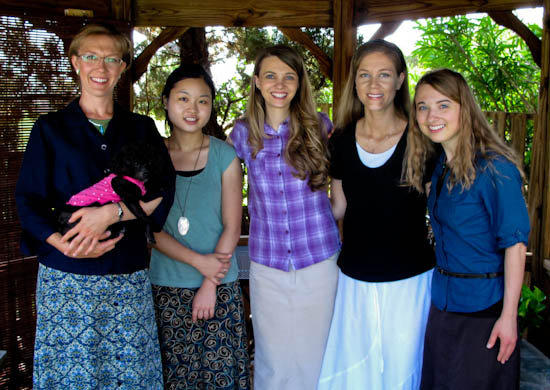 Tayrn, Jolynn, Sarah, Mirren, and me. I first got acquainted with Tayrn and Mirren while helping at the Answers in Genesis booth at the NEA convention last year. I have so much respect for them, their depth of conviction, humility, love for Christ, and for the selfless life of ministry they live.

On our way home Delta overbooked our flight and offered us free air miles if we stayed overnight in Detroit and took the next flight in the morning. We were each given a voucher worth $400 of air miles that we can use on future flights. Not a bad way to make money. 🙂 Plus we were given a free night in a nice hotel with my sister and $48 worth of “meal vouchers” to spend in the airport.

I admit, it did take a while for my dad to decide whether he thought staying overnight in Detroit would be safe (have I ever mentioned he is VERY cautious? :)) and the lady at the gate was getting annoyed with all my questions. Eventually Sarah told the lady, “I think we are going to take the offer and stay.”
“Well, you can’t say ‘THINK.’” She said, “It’s either ‘YES’ or ‘NO.’”
(Lol. She had gotten to know us well.)
“Ok, yes we are staying,” Sarah clarified.
After that she became very friendly again. She really appreciated the tract we left with her and as she began looking at it, she said, “I like it already!” 🙂 She even told me she was going to e-mail me after she read it.

Two other ladies, Becky and Doris, were also staying overnight and we immediately became friends. Then, as we were shuttling over to the hotel, I noticed another girl in the shuttle who was traveling alone. And we noticed that she was in the room right next to ours.

“Should we ask her if she wants to go out to eat with us?” Sarah and I wondered.
It won’t hurt to ask, we concluded and knocked on her door.

She seemed anxious to join us, so we went down to the little hotel restaurant. It was about 9pm. She told us that she had just come from her grandpa’s funeral, and it had been a very hard time on her family. She mentioned how she cried the first 15 minutes of her flight. Then we learned that she had converted to Mormonism two years ago.
“What were some of the reasons you were attracted to Mormonism?” I asked her.
“When the [Mormon] missionaries came to my door,” she explained, “They told me that I should pray and that if what they were saying was true, I would feel it in my heart—the spirit of God would confirm it to me. And that’s what happened.”

Sarah and I realized that we needed to be especially sensitive as we reasoned with her because she was already having such an emotional time. Plus, she seemed to be basing her conclusions on feelings instead of logic.

We talked about who Jesus is, having a relationship with our Creator, how truth is narrow, the problem of sin, etc. We asked her some more questions about Mormonism and tried to be as sensitive as possible as we challenged a few of the points she made. We actually talked for about two hours! I think it went well. And God provided in a neat way: Becky and Doris (the other ladies who had also taken the free voucher) were also eating with us in the little restaurant. Becky asked, “Aren’t all religions basically the same?”
This gave Sarah and me a perfect “in” to thoroughly answer Becky’s question in a way that would communicate truth to our new Mormon friend (Sara) indirectly.
In the morning we got the chance to see Sara again and gave her this Heaven booklet, by Randy Alcorn. We felt that it was the right thing for her at this time. Please pray for her. She has my e-mail so I’m hoping she contacts me.

This conversation reminded me of the effectiveness of door-to-door evangelism. She became a Mormon because of the “missionaries” who came to her door. What if they had been Christian missionaries instead? Door to door evangelism is still an effective approach to sharing the gospel today and it’s also Biblical. (Acts 20:20)

The next morning as we sat at our gate (again) we talked with Becky and Doris about the conversation the previous night with Sara. I think they both found it quite interesting as well.

Praise God for the way He directs, provides and orchestrates.