We are currently in the middle of a busy confernece here in Orlando. My mom hasn’t been feeling well, but besides for that, we’ve been encouraged about how the conference has been going.

Here is a picture I snapped as we were setting up. Mia is a little friend of mine…she was helping her family unload their trailor and set up their booth, “Lifetime Books and Gifts”.
Since a lot of the vendors go to the same conferences, we enjoy seeing each other every few weekends in various parts of the country–wherever the next state homeschool conference is.

One of the best parts of the Mississippi homeschool conference was getting to know the close-knit group of board members and their families. It was refreshing to us to spend time with a group of strong Christian families who are not afraid to seek God’s best without compromising. They are doing a great job running their conference. 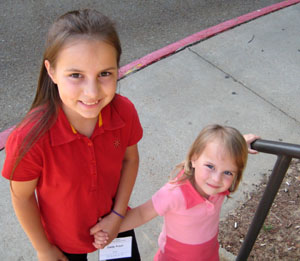 Here Candy is taking a walk with her little sister Amy. 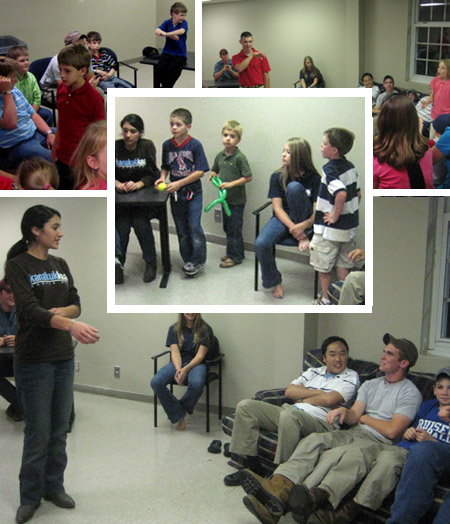 Stephen and I had fun playing a game late Saturday night with the kids of the board members. It got us all laughing… I guess that happens easily when everyone is tired after a long conference. 🙂

This is the first time our family has been to the Mississippi State Homeschool conference and we’ve been enjoying it so far! 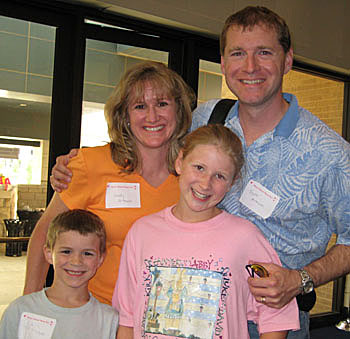 After we spoke on brother/sister relationships at the conference yesterday, we noticed a boy named Sam (pictured above) standing next to our booth with a big smile on his face. His parents told us, “We gave Sam some money to buy something for himself at the conference. After going to your session, Sam decided to put what he learned into practice and buy a gift for his 2 older brothers.” It was cute to see Sam grinning, obviously pleased with his decision, and it’s a great reminder to all of us that it’s more blessed to give than to receive. 🙂

It was a great day! We were exhausted afterwards, but we were all very encouraged by the people we talked to and the good reports we heard.

While Stephen was working at the booth, one lady came and picked up a Making Brothers and Sisters Best Friends book off the stack. Turning it over and seeing our pictures on the back, she asked Stephen, “And which one are you?”

Another lady came up to the booth and picked up Before You Meet Prince Charming. “I’ve never heard of this book before” she told Sarah. Pointing to Sarah’s picture on the back she asked “Is she a famous author?”
When Sarah explained that it was her, the lady seemed quite embarrased.

Sarah and my Dad ate lunch with some homeschoolers attending the conference. After Sarah got up to leave, one girl commented, “You gotta be careful what you say around Sarah…she might write about it”.

After supper Dad and Stephen were glad to have some daylight left so they could play catch in the hotel parking lot.

Now we are all back in the hotel room getting ready for bed. Dad just shared a verse with us:
“I am glad of the coming of Stephanas and Fortunatus and Achaicus… for they have refreshed my spirit and yours.” (1 Corinthians 16:17) We talked about how that is a great goal– to refresh the spirits of others.

My dad and Stephen made it safely to Walmart! When the mechanics saw our tire, they were amazed. They had never seen a bulge in a tire that large.

We are grateful for how the Lord has taken care of us in the situation! The tire could have exploded as we were going 70 mi per hour down the interstate, but instead God allowed us to notice the problem when we were parked and get it fixed before it caused trouble.

After traveling 921 miles we finally arrived in Texas! Thankfully, we all like to ride in the van. Especially Sarah—she can’t get enough of it. Usually she’s disappointed when we arrive. Behind our van we are pulling a 24 foot trailor.

We will be on the road for a month, primarily traveling to 3 homeschool conferences (Texas, Mississippi, and Florida).

I am planning to post a picture a day, so those that are interested can keep up with what is happening. I may not always be able to post the picture on the day, but if I can’t I’ll post it the next day.

Well, the plan was to have everything in the van Monday night and leave in the morning. As usual, it didn’t happen that way. Since we didn’t leave until until Tuesday evening, we drove through the night. We stopped to sleep in the Walmart parking lot. Since we have 4 bench seats in our van, most of us were quite comfortable. Sarah slept on the floor. She said she liked it.

We made a stop this afternoon to drop off a box of Spanish “Making Brothers and Sisters Best Friends” in Oklahoma City at “The Lighthouse”. A homeschool family, the Engles, bought an old building downtown that they are fixing up as a ministry center. Currently they are running a bookstore, coffee shop, Creation museum, and they provide appartments for missionaries to stay in. This week they are going to the Dominican Republic so they wanted to distribute the Spanish translation of our book there.

Since I had some extra time in the van today, I put together some pictures from Stephen’s birthday. The actual date was the 16th, but we celebrated it just last week. To explain a few of the gifts you see here…

-Stephen has been mentioning for a while how he’d like a giant stuffed penguin. We found him one an hour before his party. 🙂 When my mom called the toy store they asked “Now how old is your son?” She said “Well, he’s actually 22…” We’re glad Stephen is still young and fun at heart. 🙂
-The sign he is holding says, “If it weren’t for coffee, nothing would get done around here.”
-My grandparents gave him a commentary of the Old Testiment by William McDonald
-Sarah ordered this white shirt for him to wear when he freelances for our local newspaper. The little caption in the corner says, “A wise man once said, ‘don’t forget to remove lens cap.’”
-In the middle is a picture of his German Chocolate Cake.

Setting up our booth

From set-up on Thursday to tear down Saturday night, our weekend at the Kansas City Homeschool conference was busy and eventful. We did 3 sessions, and felt that they were well-recieved. We arrived home today today.

Here is our booth, finally set up! 🙂

On Friday night, we were invited out to dinner by the Ward Family, who help host the conference in Kansas City. We enjoyed the fellowship and the good BBQ meal. Here’s the “kids” table. 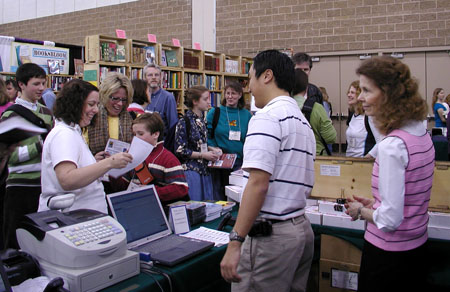 Here are Stephen and my mom working at our booth. The conference went very well. One thing I appreicate about homeschool moms is that they are very encouraging and easy to talk with! It’s a good thing, too, because after two days of explaining the same thing, I stop thinking straight!

Some answers we give over and over like, “The age range for Bright Lights is approx. 10-15” and “Yes, Sarah, Stephen and I actually do get along” (It’s not like really have a choice now, anyway 🙂 ) and “No, we don’t have material for boys (yet)” and “I know, Sarah doesn’t look 28, but she really is”.