Here are a few questions you could use in starting conversations with unbelievers about the Lord this weekend:

“Why do we call Friday ‘Good Friday’? Why not ‘Bad Friday’?”
“What was the primary reason Jesus died?”
“Who do you think was most responsible for crucifying Jesus?”
“Do you know of any evidence to prove that the resurrection of Jesus really happened?”

Also, if you’d like to print our “Evidence for the Resurrection” tract you are welcome to do so. Just print double sided, then cut in half and fold in thirds.

An estimated 10,000+ people gathered downtown to watch the St Patrick’s parade. Simultaneously, about thirty believers — ages four to sixty-five — gathered to share the gospel with the crowds!

It was freezing out, and even with all of our layers we were still COLD! But it was worth it. [smile]

Here’s a little glimpse of what happened.

A highlight for me was seeing the enthusiasm in the younger ones. It makes an impact to be a part of multiple witnessing conversations and realize how many people simply don’t know the gospel! But they were encouraged by how interested people were, and they saw that the Lord was able to use them at their young age. Now they are excited to come witnessing again next time.

Thank you to everyone at our church who helped fold tracts, and to Stephen and Andrew who captured all the video footage. Also thank you to Stephen who put this clip together.

Your God has commanded your strength; Show Yourself strong, O God, who have acted on our behalf (Psalm 68:28).

“I am ready [to give] even my life without hesitation; and most willingly for His name. And I choose to devote it to him even unto death, if God grant it to me.” – St Patrick

“Did you go to the parade Sunday?” I asked the bank teller this afternoon while she deposited a few checks for me.
“No, we didn’t,” she said, “But I was thinking we should have…”
She was very warm and chatty.

I told her, “We went, but not just to watch the parade — we went to talk to people about St Patrick. Hardly anyone knows who he really was.”
She agreed and replied, “He wasn’t Irish, he was exiled to Ireland, or something like that.”
“Yes! he was captured as a slave and brought there, and then he escaped, but then went back as a missionary…” I told her.

“Well the Irish really like him!” she stated.
“Yeah,” I smiled, “well apparently Ireland was really dark at that time, but Patrick brought the gospel, and started a bunch of churches, and the gospel changed Ireland so much they still remember him today.”
“Yeah, we looked him up,” she said, “and yes—it sounded like he was as a missionary. But there’s really not that much information about him.”
“Well, it was a long time ago,” I said, “but the other night my dad was reading some of his writings—it sounds kind of like the Bible,” I smiled.

“You know what you would like?” she told me, “the BIBLE series on the History channel… we were watching that the other day. It’s really great.”
“Yes, I’ve heard about it,” I said.
“You know what I thought as I was watching it?” She said. “There was so much violence! I mean, it seems like God really lightened up when he had a kid.”
I laughed. “Yeah. Well it shows the rebellion in humanity …and it was God’s plan unfolding because the world needs a Savior—”

After speaking of the violence in the world some more, she said, “Well, one day God is going to judge.”
“Yeah that’s true!” I agreed.
“So it just comes down to ‘Are you a good person?’” she said soberly.
“Okay, so since you just said that I have to give you this,” I said, pulling an Are You A Good Person gospel comic tract out of my purse and handing it to her. “It explains how we have ALL broken God’s laws and that’s why we need a Savior…”

She began flipping through it and saw a picture of the KKK, Hitler, etc. She commented, “You know, with these people that are the worst of the worst, you have to just think that there is even some good in them. You know, I hope Saddam Hussein took his boys into the back yard and played ball with them.”
“Well, maybe, but we have to realize that there is evil in each of our hearts,” I said, “and Heaven is a place of perfection…! It’s true that God will judge all the evil in the world, but the thing is: we aren’t exempt from that! We have evil in our hearts, too. A lot of people think that we can get to Heaven by being good but the truth is that we have to repent and trust the Savior—that’s what the Bible says.”

She thanked me told me she would definitely look over the good person comic.

This lady obviously doesn’t realize that Jesus is the Creator who has always existed. God didn’t “have a kid” – rather He “sent His Son”. And God is merciful and always has been. When Jesus died for us evil people, that shows how merciful God truly is.

Please pray that this bank teller would be convicted of sin and trust in Jesus. She (like many other Americans) likes the Bible, grew up Catholic, has Bible knowledge and, I believe, some fear of God. But what she obviously does not have is an understanding of Christ’s offer of cleansing from sin and guarantee of eternal life for those who come to Him.

Stephen’s group, the Light Shop, doesn’t get mentioned on this blog much since I’m never there to take pictures. (I’m always at Bright Lights, which meets simultaneously.) But the other night I sent my camera along with my dad and he took some pictures to document what was happening over there.

They’ve been going through the ROOTS witnessing DVD series and talking about witnessing. The other night they also did “role-play” witnessing, where each guy picked someone else in the group and had 4 minutes to share the gospel with them.

For an activity, they did some paper-fishing …

Each fish is sticky (there is tape on top of it) and the goal is to throw out your fishing line, hope a fish sticks to it, and see how many you can catch.

“And He said to them, ‘Follow Me, and I will make you fishers of men.’ Immediately they left their nets and followed Him.” (Matthew 4:19-20).

What an honor that Jesus still calls us today not just to salvation, but to actually help with His work here on earth. 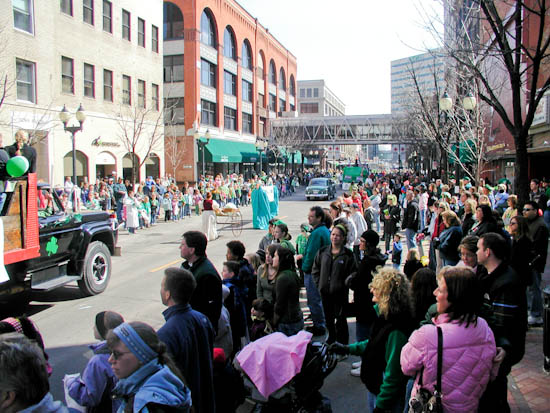 Can you imagine living a life that makes such an impact that the world still remembers you 1,600 later?

Of course, most people don’t know who St. Patrick really was or what he did. They don’t know that he was a missionary whom God used to bring the gospel to Ireland in 400 AD. However, since Christians use his legacy as an open door to share his true story AND his message, St Patrick’s life is not just being remembered by the world, it is still being used by God today!

St. Patrick’s Day is 9 days away. Here’s are four ideas of ways to communicate the gospel either at the parade in your area or simply to people you meet anywhere:

1) Pass out tracts. Click here for a tract you could print double-sided on green paper and use if you’d like. 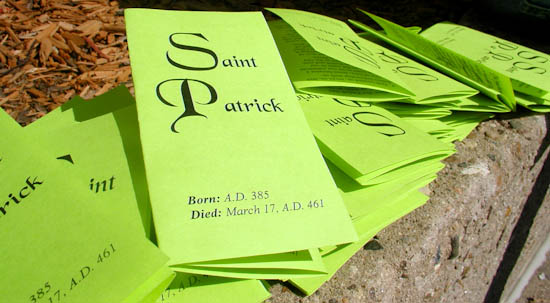 2) Start talking to someone. Gradually gear the conversation to spiritual things. (“Nice day for a parade, isn’t it? … Do you come to this parade every year? … So do you know much about who St. Patrick was? … He was actually a missionary and he wasn’t even Irish–he was English! … So do you have a spiritual background at all? …What are your beliefs?”)

4) Open air preach right after it ends. A friend might do this in our town this year and we’d appreciate prayer for that outreach. [smile]

Above all, let’s pray that Christians everywhere take advantage of this useful day and share St Patrick’s message on St Patrick’s Day, 2013!

And we don’t have to wait until then! This whole next week is a great time to be giving out St. Patrick’s tracts and bringing him up in conversations.