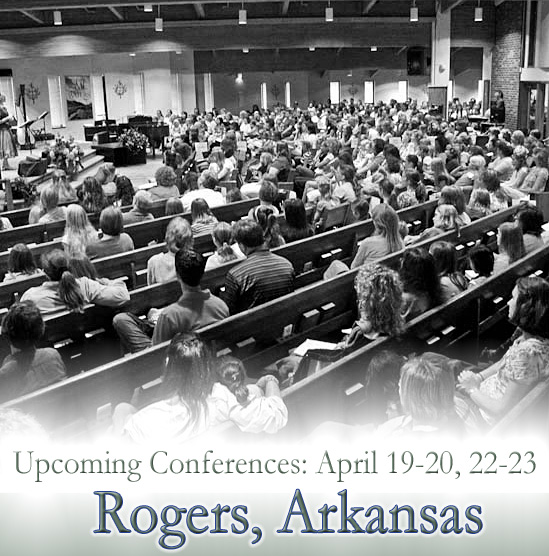 Click here for information about the Strong in the Lord Conference and Radiant Purity Conference that will take place in less than a month. Early registration ends April 8th. Other 2011 conferences will be held in Wisconsin, Nebraska, Pennsylvania, Ohio, and Minnesota.

The trees are in bloom in South Carolina already! (Winter gets long in Iowa sometimes!) I love the accent and how friendly everyone is down here…. though Stephen did say he’s getting a little tired of people calling him “sweetie.” Haha

It was encouraging to see a great response to Sarah’s session at the conference. There was much interest in Bright Lights–praise the Lord for that! I explained about the Bright Lights material to so many moms that by the end of the day I could hardly say it straight anymore. 🙂

We met so many sweet families at the conference. It is definitely exciting to see how the Lord is raising up a generation all over this nation that are seeking His ways.

It was a great conference! Things went smoothly and we were very grateful to be there. Lots of good memories and good conversations. Now we head home to regroup and repack for some more conferences coming up soon.

“Oh that men would praise the LORD for his goodness, and for his wonderful works to the children of men! For he satisfieth the longing soul, and filleth the hungry soul with goodness.” (Psalm 107:8-9)

St Patrick’s Day (March 17) opens a terrific opportunity to share the gospel. Although most people don’t know this, St. Patrick was actually a great missionary and hero of the faith. This gives us an open door to bring up spiritual things with people this week. We can just ask “Do you know who St Patrick really was?” and then give them some information about it.

If there is a parade in your town, consider pulling a group together, printing tracts on light green paper, and go spread the gospel! Last year we had such an exciting time….see report HERE!

Even if you can’t go to a parade, consider printing some and passing them out to cashiers, neighbors, friends, etc. Just today I passed out some St Patrick’s tracts to two cashiers and they both responded with interest and gratefulness. They (like most people) were curious about who he really was!

Wow, I am definitely behind on posting! I have a lot to write about, but I think I’ll start with a quick report of our last trip. We just arrived home from the homeschool conference in Memphis, TN.

One of the highlights of homeschool conferences is meeting and visiting with so many other godly families.

Sarah’s session on “Preparing Young Ladies for their Teenage Years.”

Here Sarah is talking with a lady who has been leading a Bright Lights group for several years in Nashville, TN. She was full of good reports, and it was truly a blessing to be able to hear how the Lord has been working there.

One thing about road trips is that they provide so many new contacts and opportunities to witness. Before the trip, I prayed that the Lord would prepare the people’s hearts that we would witness to along the way. One of the clearest examples of God’s answer to this prayer was an Italian Catholic man who was the manager of a small gas station in Missouri. His station was out of gas, and we weren’t sure why he was even open. There were no customers, and he was just sitting at a table reading a book when we walked in. He rose to greet us and to see what we needed. My dad and I handed him a dinosaur booklet and then we noticed the book he had been reading sitting on his table right next to his ash tray. It was “One Heartbeat Away,” (by Mark Cahill). Apparently, he had been reading the book just before we arrived! (This is an evangelistic book that we often give away to unbelievers—in fact we had some “give away copies” with us in our van.)
Immediately we realized that God must want us to talk with this man. Although he believed in Jesus, he firmly stated that he thinks one must earn their salvation.
“Then who gets the credit?” my dad asked.
“That’s how you earn it—by getting credits! You go to church, you believe, you pray…” he said.
Obviously, he didn’t understand dad’s point. His broken English probably contributed to that.
“If we earned it, then it would not be by God’s mercy,” Dad explained.
That stumped him for a second, but he seemed unwilling to reason. Instead, he held firmly to his “salvation by works” mentality.
Understandably, if someone has been thinking this way for their entire life, it is not easy to change in one 15 minute conversation. But we have a special tool—prayer. God can change his thinking.
He told us he was up to chapter five in “One Heartbeat Away.” Chapters six, seven and eight are about the law and the gospel, so hopefully he keeps reading. Please pray for him!