Our whole family almost died last Friday night on a trip home from Chicago. We are amazed to be alive.

The five of us were together, traveling home from a great-aunt’s funeral. We were having a nice family time in the van, laughing at old stories.

The weather had just changed, and had become a mix of rain and snow, but it didn’t seem especially dangerous. But it was more slick than we thought, and while passing a semi we hit ice and began fishtailing.

“Oh no,” I heard. We were losing control.

I peered up from the second bench where I had been lying down, and saw the front of our van hit the side of the semi we had been passing. The impact of hitting that semi sent our van violently into the grassy median, and I saw that we were now headed towards the gleaming lights of oncoming traffic. All of a sudden things felt really out of control (we were rolling, but I didn’t realize it at the time) and I heard the loud noise of the van roof crunching in on top of us. I yelled, “Jesus, protect us!” and tried to prepare myself, thinking I was about to feel a ton of pain, and we all might die.

However, after a few seconds, we were stopped by the side of the road, and I didn’t feel the pain I had been anticipating.

“I’m okay!” I said, surprised.
“I’m okay,” my dad responded.
“I’m okay,” Sarah echoed.
“I’m in pain,” my mom said. Just hearing her voice was a relief, but she was holding her stomach and her shirt was getting bloody. She was not able to answer questions very well or identify the location of the pain.

Stephen was already on the phone with 911.

I looked around to get my bearings. We had been going west, but now we were on the far side of the east-bound lanes of the interstate.

Here’s what had happened: We had rolled over the cable separation barrier and landed right side up in oncoming traffic. When Stephen (the driver) refocused his eyes on the road after that roll, he saw the oncoming traffic about to hit us and he thought we were all going to die. However, the momentum kept us moving and we skidded across both lanes of traffic. Once Stephen saw we were on the shoulder, he stepped on the brake. He was shocked that we survived. 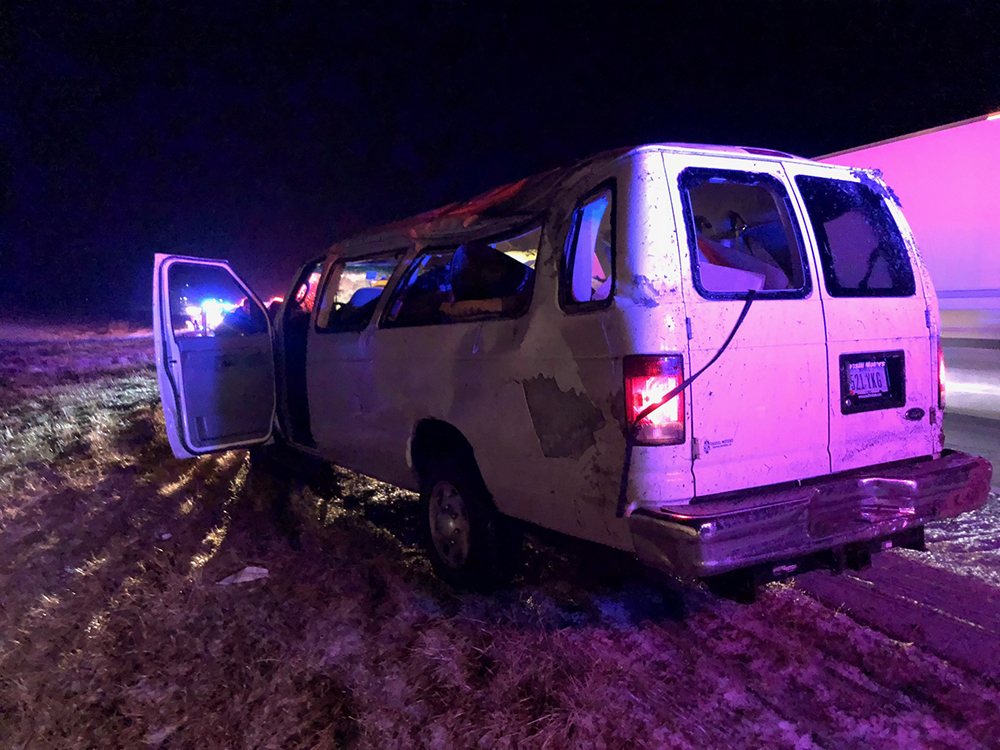 Back to my mom. She seemed a little faint and couldn’t answer questions very well, but she indicated the pain was subsiding. She was taken to the ER and later I learned that the blood was actually just from a cut on her hand. There was an initial fear of internal bleeding, but the CT scan showed her internal organs were okay. She does have a fractured shoulder, though, and bruised internal organs. The hospital kept her overnight but she is now at home recovering. 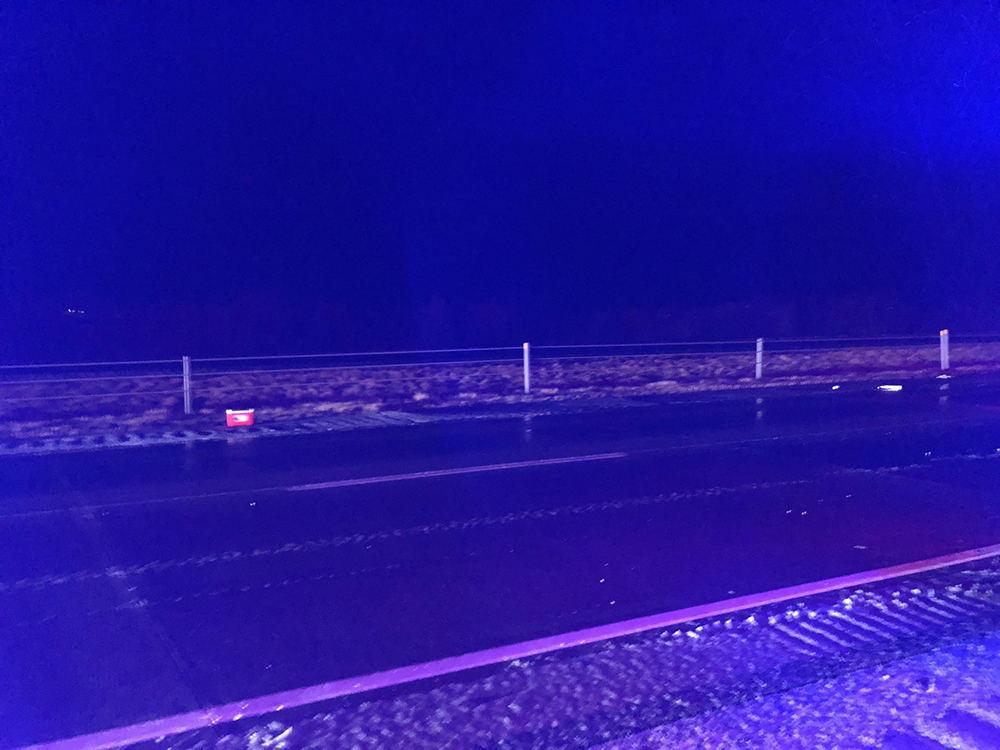 In the above picture you can see our red cooler in the median. Apparently it flew out while we rolled, along with other things. Almost all the van windows shattered and even our big harp was part way out the window. We do not have an explanation for how my mom, Sarah, and I (who were not wearing seat belts) did not also fly out the window, except for the Lord’s protecting hand. My mom was right next to the cooler, and she was even leaning against the window when we rolled. 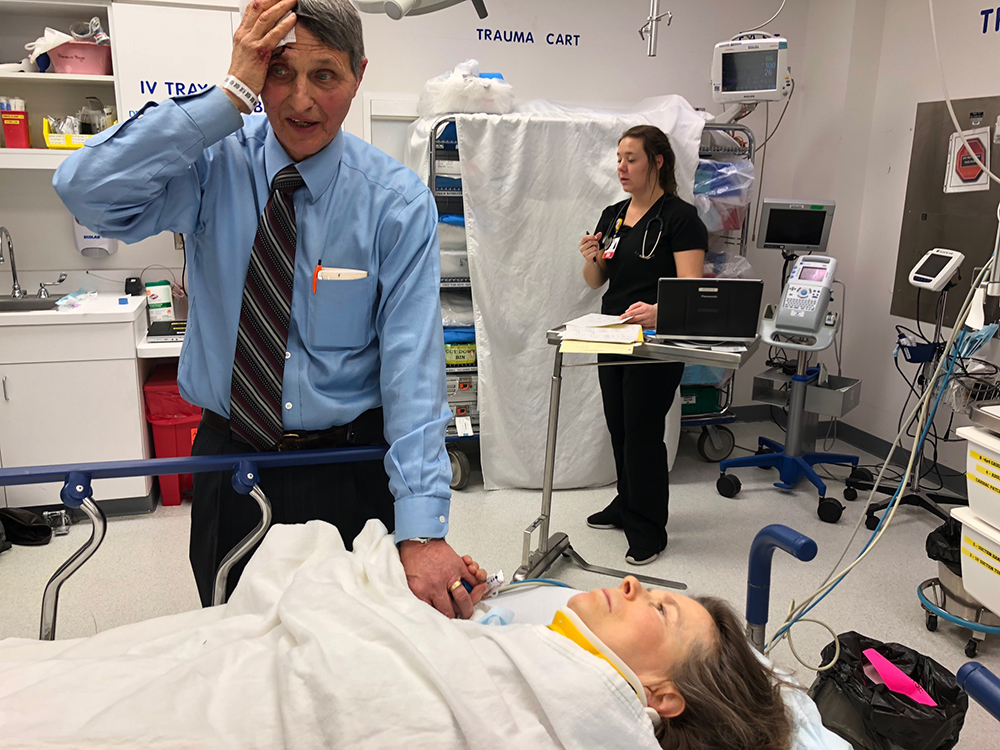 Mom and Dad were very happy to be reunited, and we were all relieved Mom wasn’t worse. It is an unbearable thought to consider all the things that could have (and realistically speaking, should have) happened.

The hospital chaplain told us, “I’ve been working here for five years, and you are the first trauma accident where all the people have lived to tell about it.”

I questioned her, confused. I mean, we all know many survive car accidents. She explained that she only gets called for the serious accidents. And in situations like ours, we were the first family in five years that all survived.

As you can imagine, we were all pretty emotionally shaken. I remember sitting with Stephen in the waiting room, waiting to hear how Mom was.
“Did you think we were going to die?” I asked him.
“Yeah. I thought we were going to die,” he said, his eyes welling up with tears.
The next few days were filled with emotion for all of us. Two days later, my dad was preaching the sermon at church and took the first 15 minutes of his sermon to tell of our accident. It was hard for him to get through it.

Through all the grateful tears, we also have an increased compassion for those that do experience great loss in these kinds of accidents. 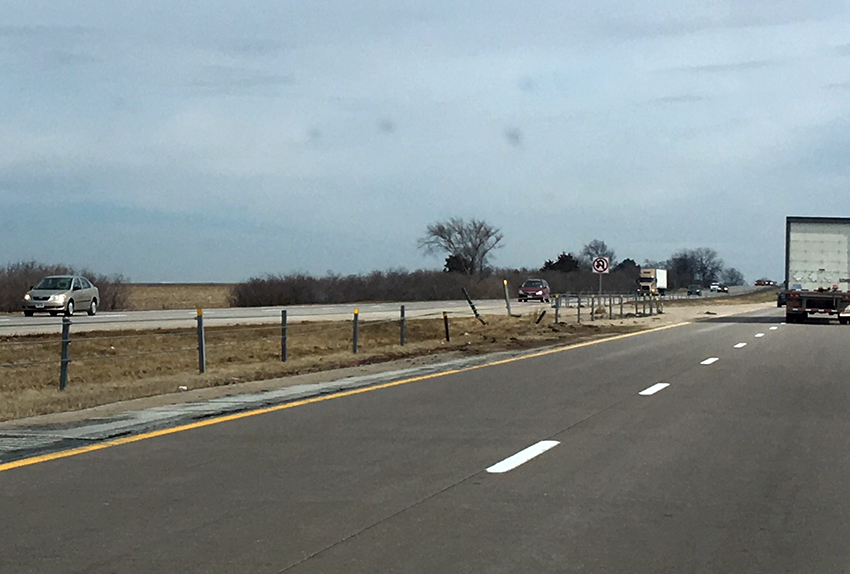 Here’s where the accident took place. We were coming from the other way. You can see the cable barrier and broken posts. That’s where we rolled. 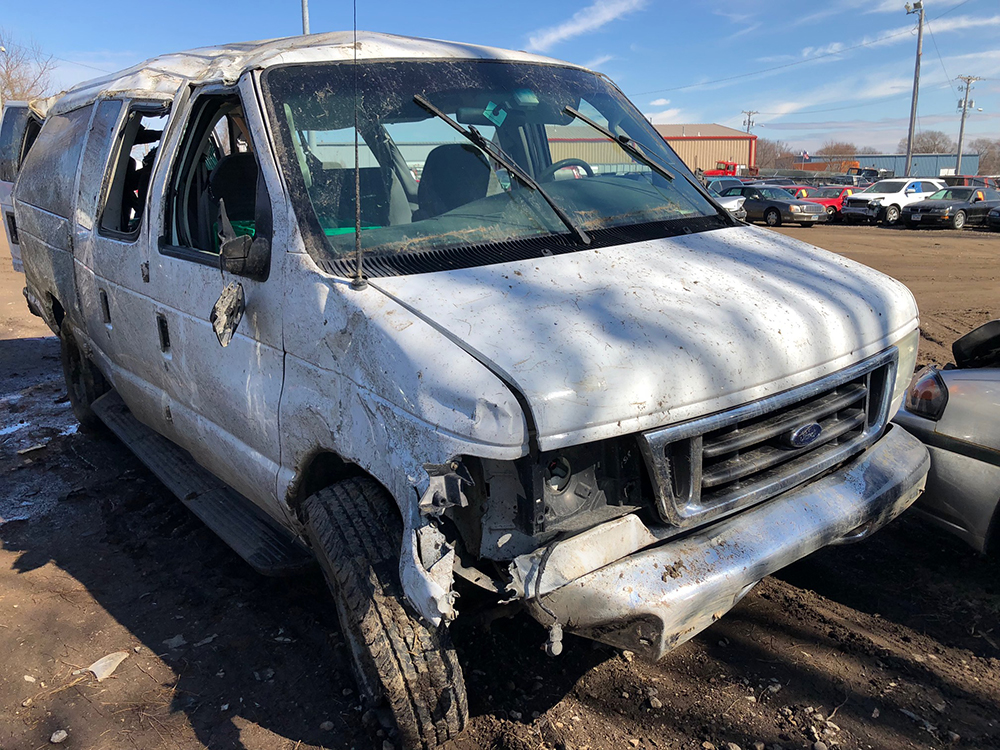 Praise God the van structure held up well enough during the roll that the roof didn’t crunch in further. 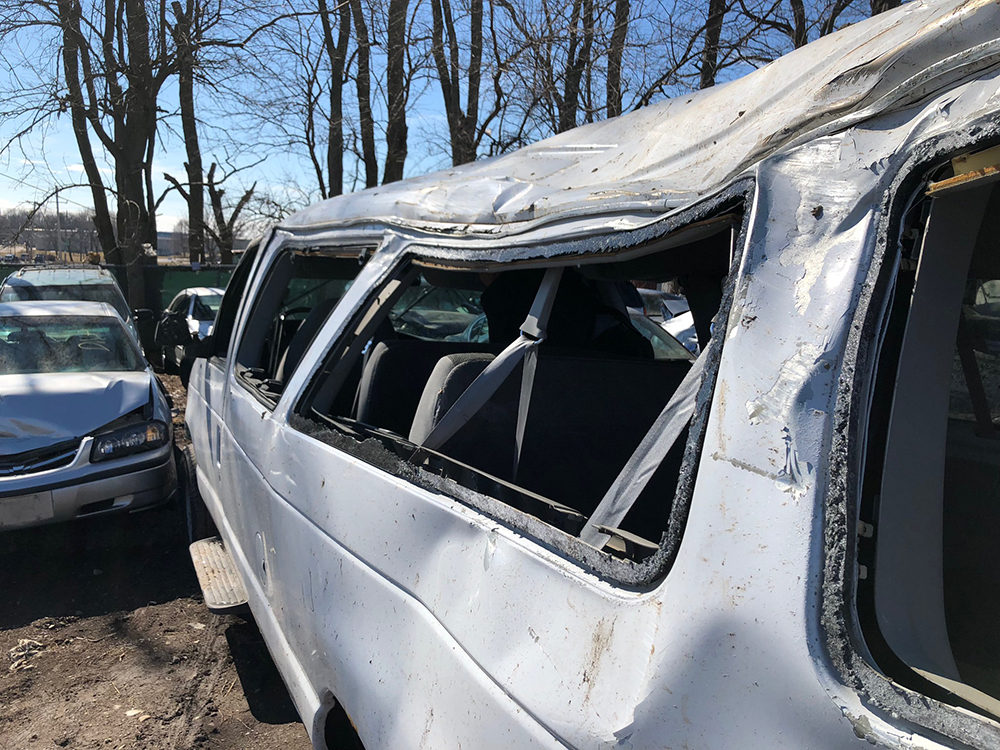 Sarah’s neck was very sore, and the next day at the junk yard and Detective Stephen discovered a clue as to why her neck hurt so much. 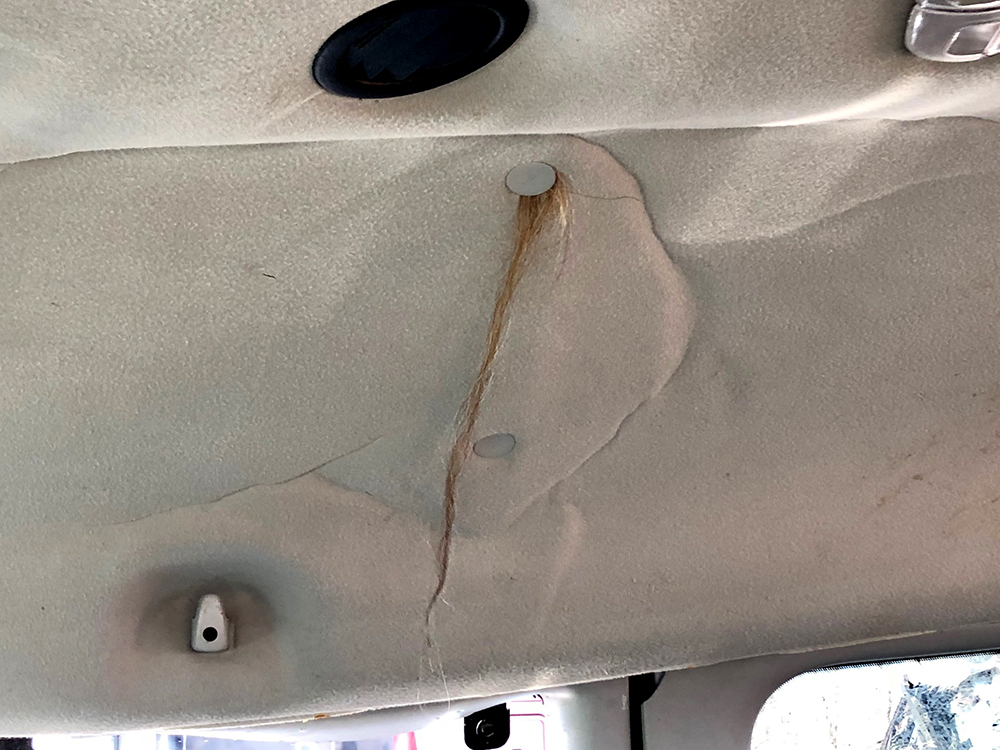 She must have hit her head on the ceiling of the van as we rolled. This is a chunk of Sarah’s hair caught in the van ceiling! Thankfully, the soreness in her neck is already subsiding. 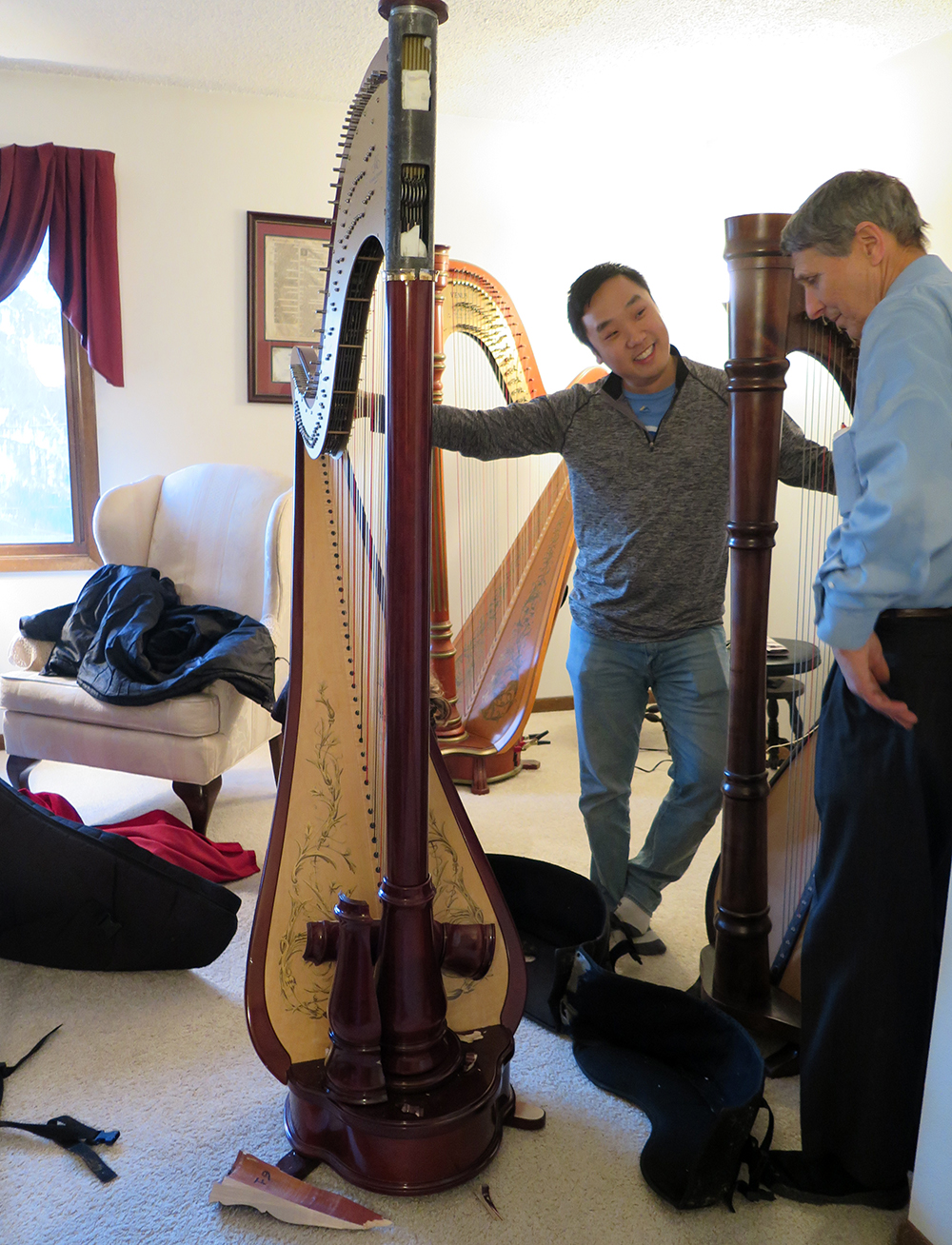 As we took off the harp cover, this is what we found. We’re grateful it was insured, but even if it wasn’t, it hardly feels like it matters. We’re alive. 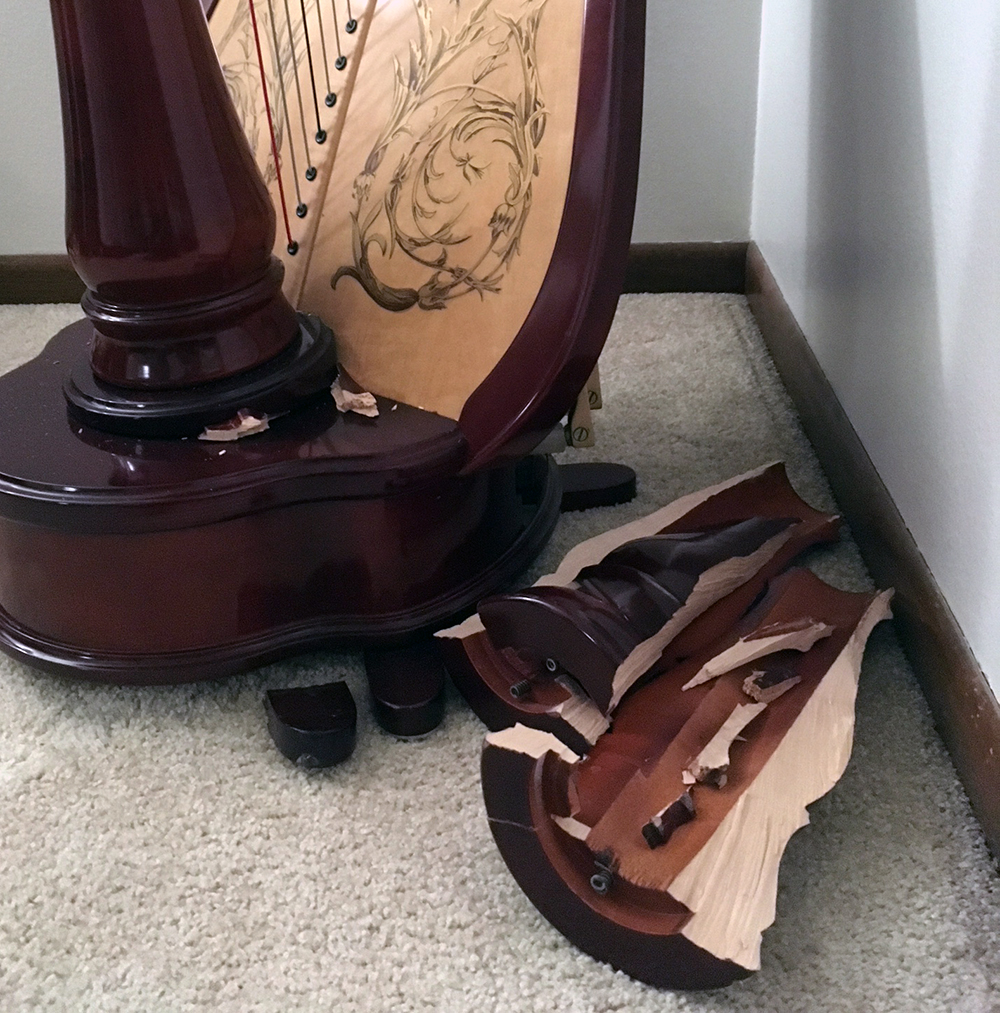 On Sunday afternoon I sat down at our kitchen table with my Bible. It fell open to Psalm 116. I looked down at the verses and read these words: “For You have rescued my soul from death, my eyes from tears, my feet from stumbling. I shall walk before the LORD in the land of the living” (Psalm 116:8-9). The whole chapter was amazingly appropriate. (Amazing how no matter the disaster, there’s a Psalm that will fit. 🙂 ) 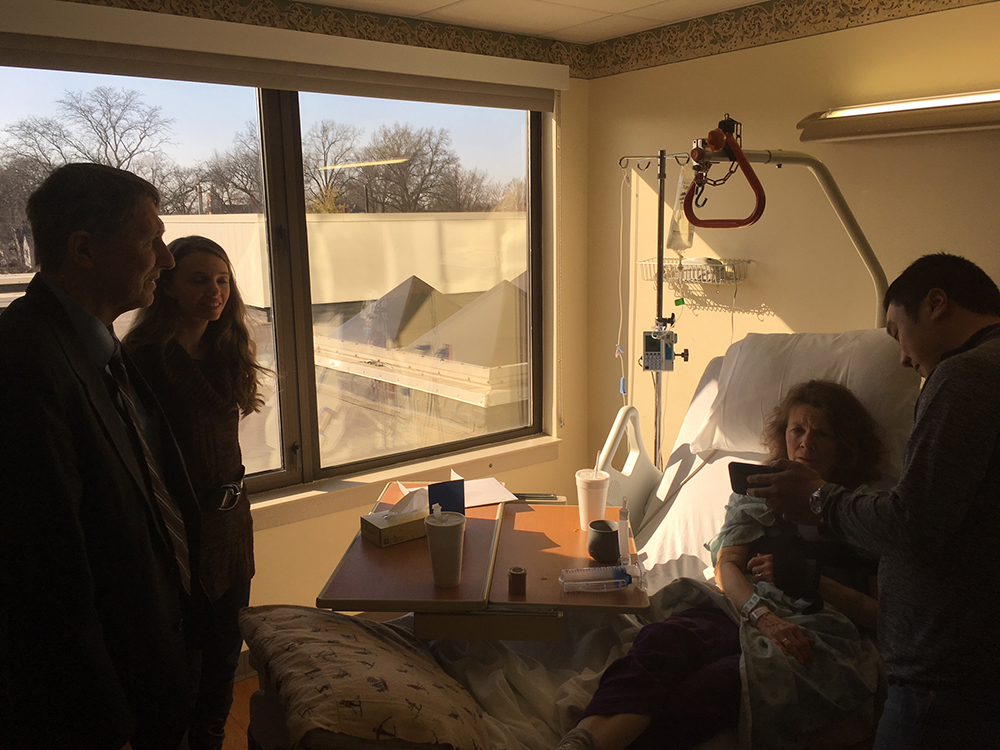 Right after the accident when I realized my family was alive, I felt such thankfulness to God that it was hard to express. It was this feeling of, “What could I ever do for You, Lord, to thank you for this?!”

Yet, that Friday night rescue wasn’t the biggest deliverance that the Lord had accomplished for me. The much bigger gift was when He died on the cross to rescue me and my family not just from earthly death, but from eternal death in Hell.

“Love so amazing, so divine, demands my soul, my life, my all” – Isaac Watts

The Lord has provided for us in countless ways: A young couple who saw the accident happening (from the oncoming traffic side) stopped immediately and were a comfort to us – they also had their families praying for us. A friend, Craig Rollinger, who lived nearby came immediately to give Stephen a ride from the hospital to retrieve the harp from the towing yard. Our church family showered us with love and met all our needs.

We have yet one more reason to owe our lives to Jesus. And we are reminded that He is able to easily rescue from any danger until He says it’s time to come Home.