I’ve already posted about the difficulties Josiah and I had from the derecho wind storm last week, so I thought I’d share a bit about how the storm looked from the rest of my family’s perspective and a broader look at our town.

My dad was with Sarah and Grandpa at the Bright Lights office when the storm hit. He writes: “When it seemed that the wind had died down, we ventured upstairs. The building next door had fallen down and was laying in the street. We had water coming through our ceiling by our back door, but I didn’t see any other immediate damage inside our office. I wanted to go home where Rebekah was, but I couldn’t get out of the parking lot. The whole lot was a mountain of 2 x 4s. It was the whole roof of the building across the street. The alley the other direction was also blocked by debris. Lots of people were now outside, even though it was still raining pretty hard. There was so much to do. The guy from the pizza shop next door helped me move the dumpsters and debris from the alley so I could get out. But getting home was another story. Every road was blocked by trees, downed power lines and debris. I had to zig-zag for 15 or 20 minutes to go the 1 mile from the Bright Lights office to home. At home, I found we lost 5 of our 11 trees and lots of branches. Our biggest tree was laying on our garage, but our damage was light compared to many others.” 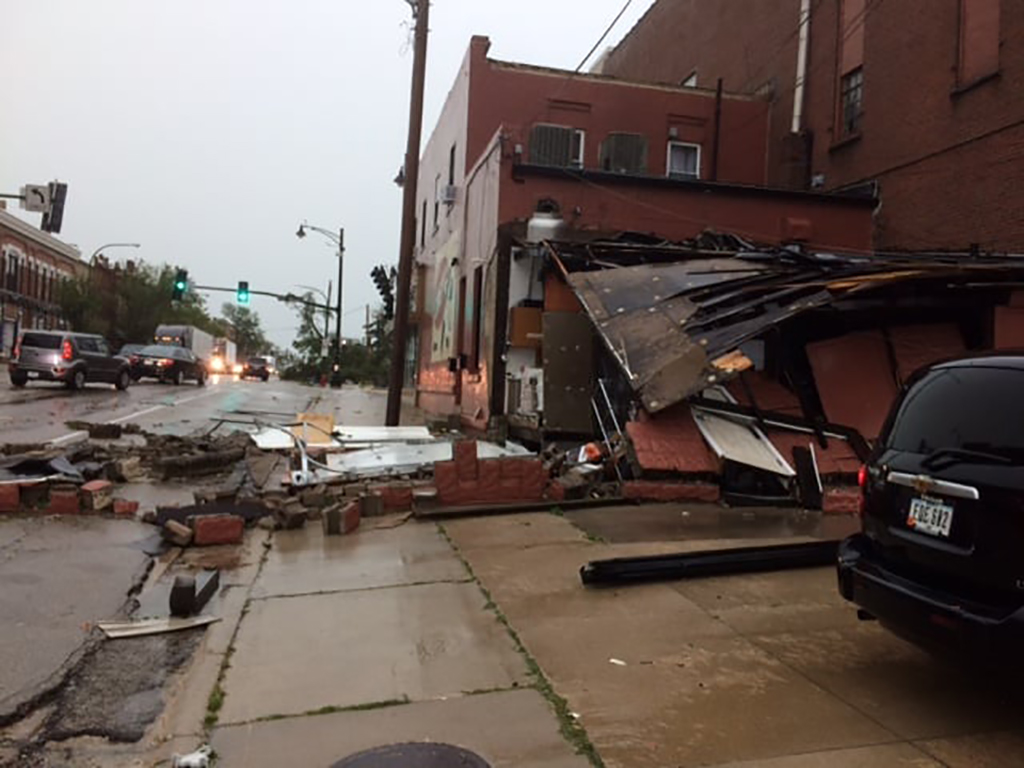 The building next door to Noah’s Archive. 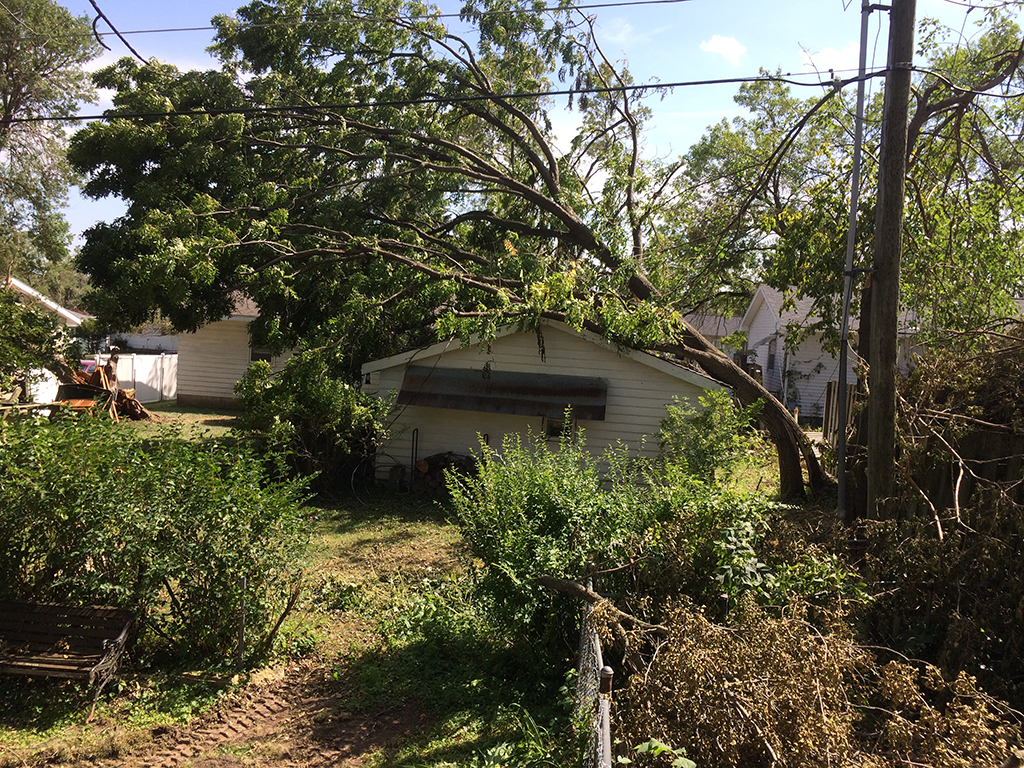 A tree fell on mom and dad’s garage. 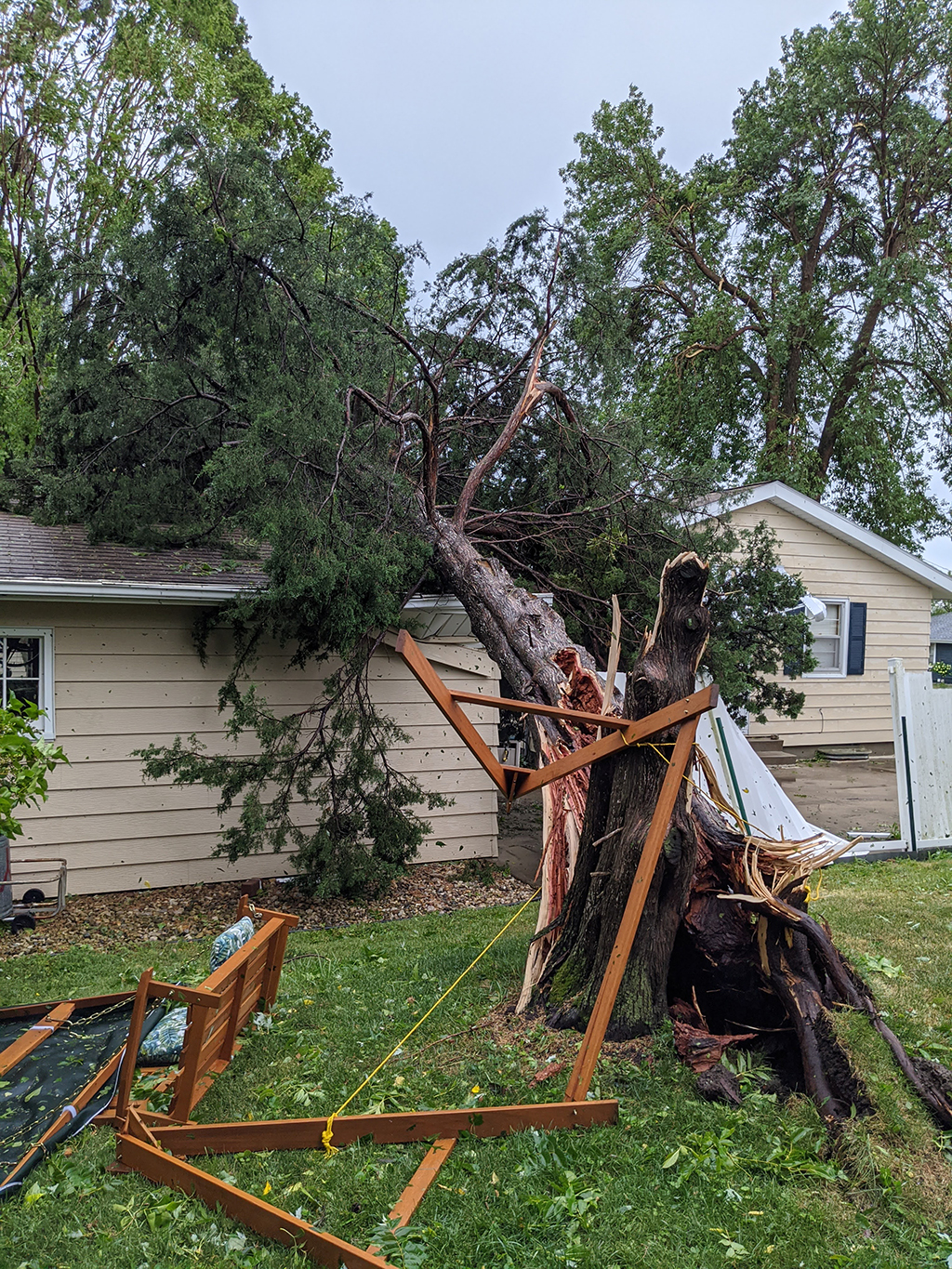 Sarah and Andrew had tied their special swing to the huge pine tree in their back yard to make sure it stayed secure in the wind storm. They never expected that the entire tree would fall on the neighbor’s garage. 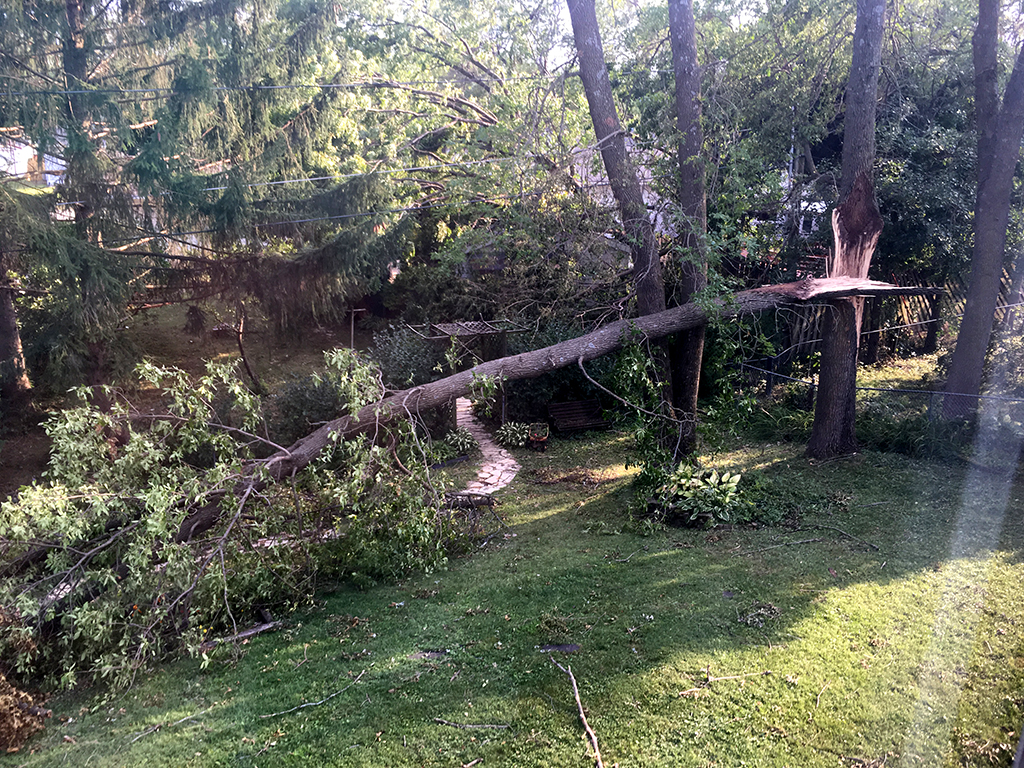 My mom was alone at home while so many trees in their backyard were crashing over.
“Are you downstairs?” my dad texted.
“Yes. Where is the safest place? This is scary,” she texted back.
“Get under the bed” my dad texted her.
“I can’t fit” she said.
“Go into the bathroom (no windows)” Stephen advised.
Thankfully no trees hit the house!

The more we all saw what had happened in our city, the worse it was. Most of the large trees were down. In fact, the city of Cedar Rapids estimates that we lost approx 50% of our tree canopy covering. Chainsaws and generators were sold out all over town. Gas stations were closed because they had no power. Driving in town was very difficult with many impassible roads. The city implemented a curfew from 10pm to 6am. Over 400,000 people lost power. No one knew when power would be coming back.

Power lines were everywhere–strewn across roads, yards, trees and branches. It felt like Cedar Rapids, the 2nd largest city in Iowa, had just become a war-devastated 3rd world country. Much food was lost. There was no garbage pick up. On the positive side, we had a beautiful view of the stars. An army of bucket trucks and crews for tree and electric work have been on our streets for two weeks now. 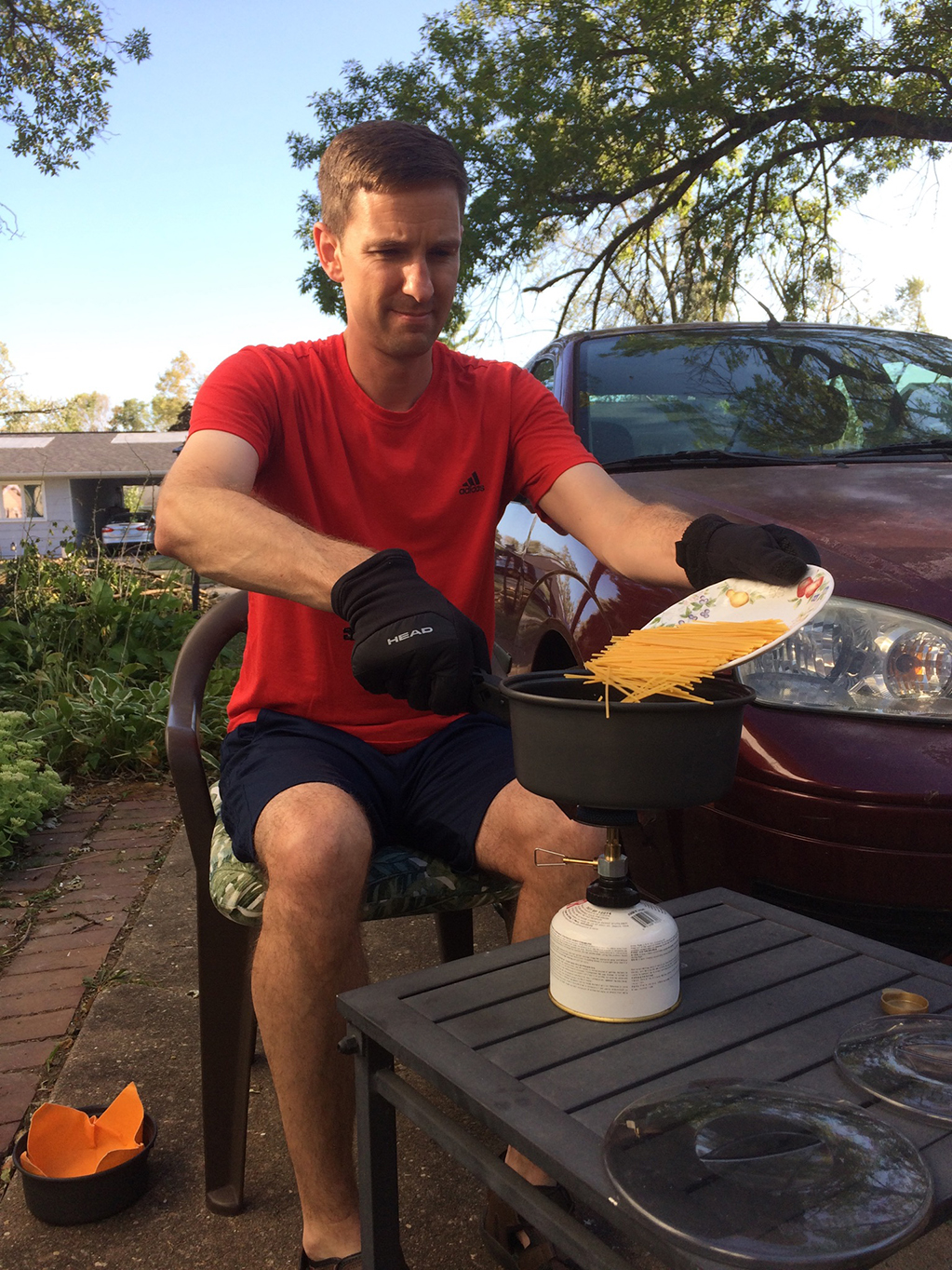 Andrew, Sarah’s husband, cooking outside. They went 10 days without power but did greatly appreciate a generator that friends shared with them.

Church on Sunday was a bit different as the service was held in the parking lot instead of in the building. At least there were many freshly cut logs to use as seats. Andrew, Sarah’s husband, was the scheduled speaker. Guess what topic he had been given weeks earlier? Jesus calming the storm.

The Bright Lights office and Noah’s Archive bookstore remained without power for about 12 days. Just three days ago the power came back on. Yay! No more packing orders by flashlight!

Neighbors have bonded together and Christians all over town have had many opportunities. The National Guard has arrived, Samaritan’s purse and other Christian groups have arrived, and most of the city now has power again. It is going to be a LOOONG time for our city to heal. Amazingly, only a few lives were lost through it all. The Lord has protected and He is working, using this tragedy for many open doors.

“The LORD hath His way in the whirlwind and in the storm, and the clouds are the dust of his feet.” Nahum 1:3

When we received a text from my brother about a severe wind storm coming Monday morning, August 10th, I took my hanging plants off their pole and set them on the ground, and felt satisfied with my preparations. Little did we know what was about to happen.

The first thing I noticed as the storm began was my heavy potted tomato plant on the back deck — gone. It had been tied to the side of our deck and the wind pulled both right off the deck. That’s when I realized something unusual was happening.

“Um, JOSIAH!” I called to my husband, who works from home now.

Outside the window, huge thick trees began bending over like the inflatable tube men you see advertising businesses. We learned later that the straight line winds were up to 140 mph. From our basement we were thankful we could text my family who were experiencing the same severe winds four miles away. Josiah and I heard crashes upstairs and the sound of water.

As soon as the storm was over, we found a broken light fixture, broken deck, and water coming through our ceiling in multiple places. 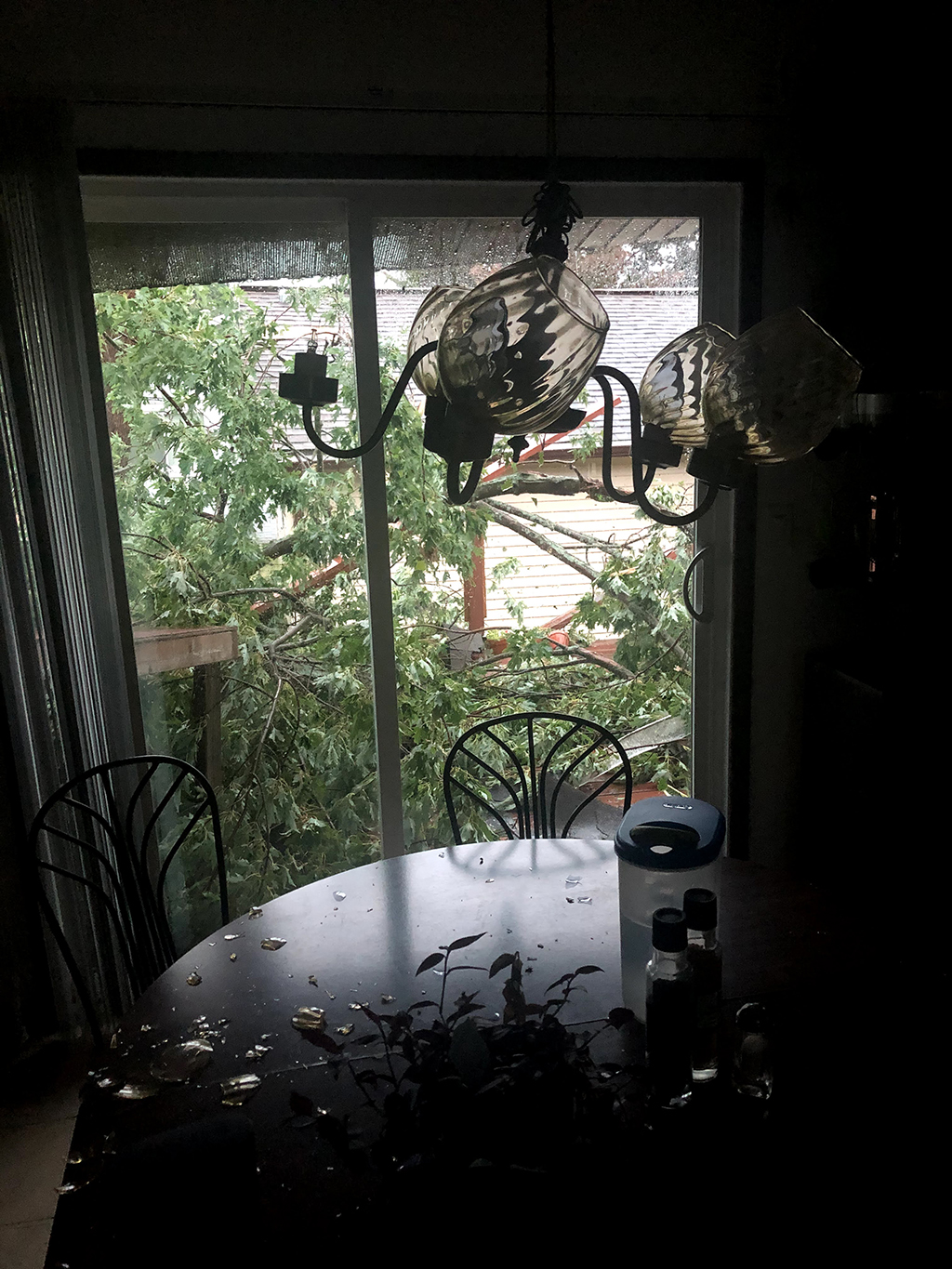 But that was nothing compared to the devastation we began seeing as we opened our door. Our neighbors across the street, Bekah and Ryan, were on vacation but they asked us to text them a photo of their house. It wasn’t pleasant having to send them this photo: 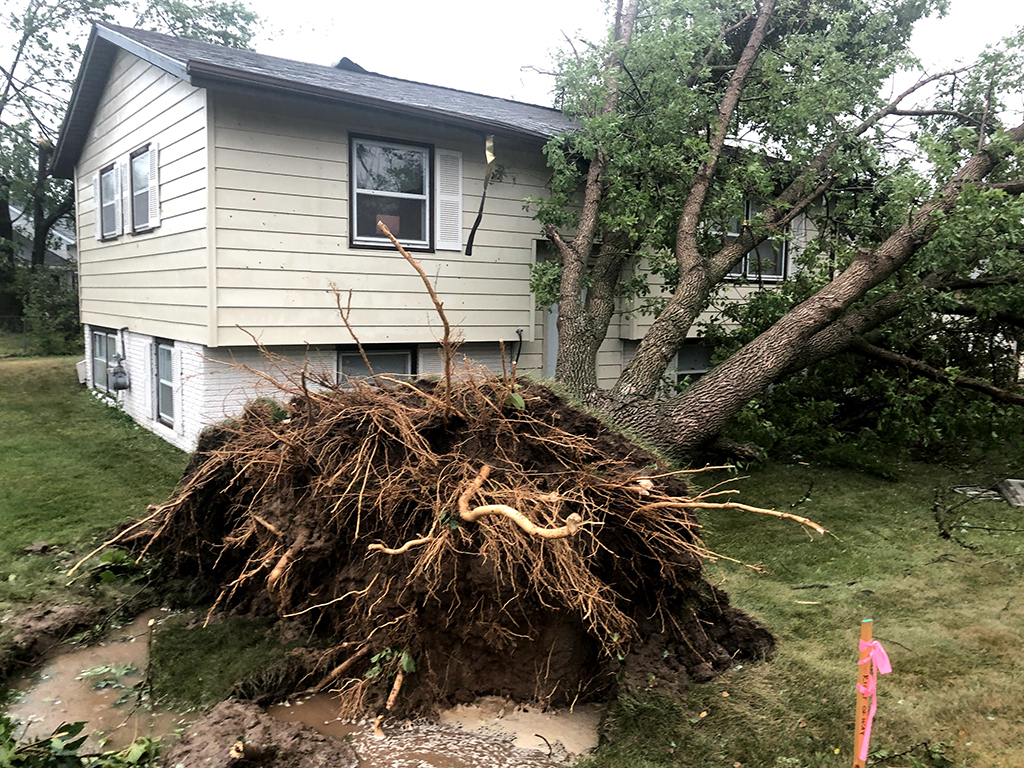 They weren’t the only ones. House after house in our neighborhood had huge trees down. Later we learned that this is was what happened throughout our entire city. 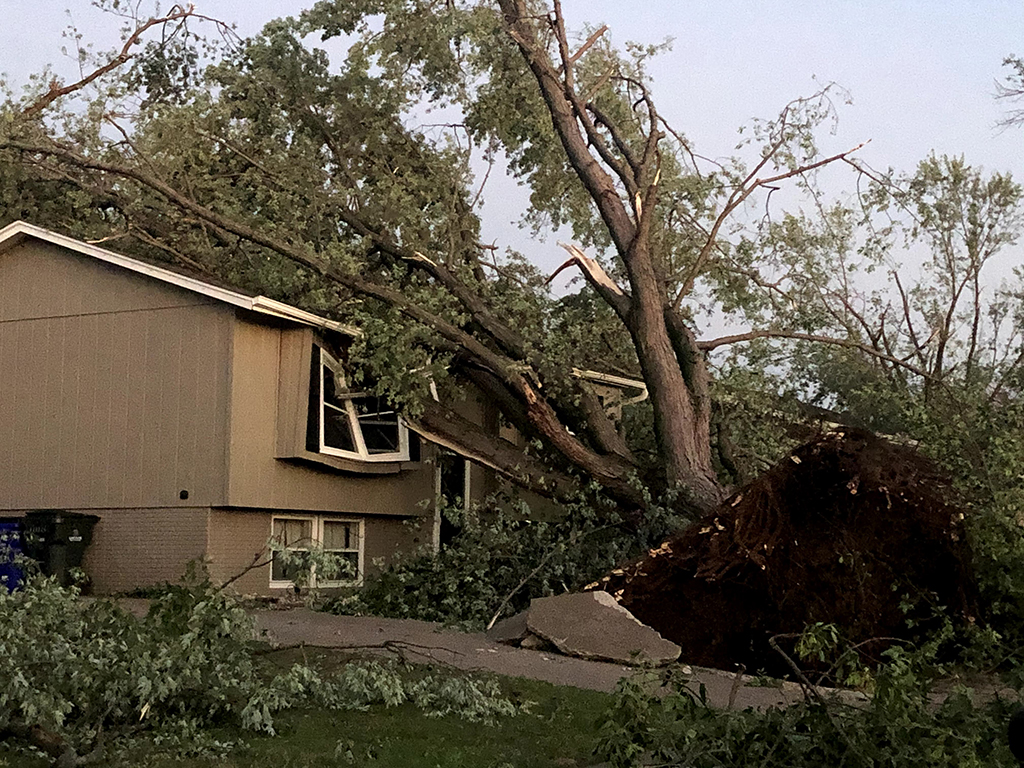 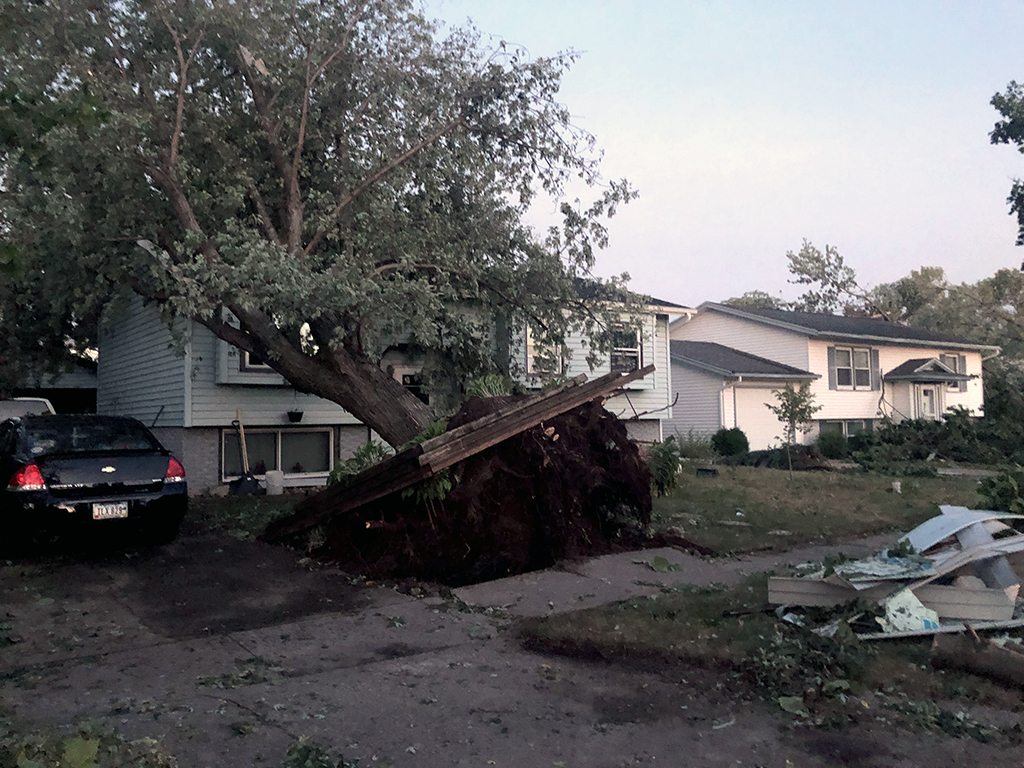 Neighbors came to warn us of a gas leak outside, saying I shouldn’t leave the house for the sake of our unborn baby’s health. Apparently there were gas leaks all over town.
We are used to tornadoes where damage is very specific to one area–not a windstorm like this that affects the entire city at once! 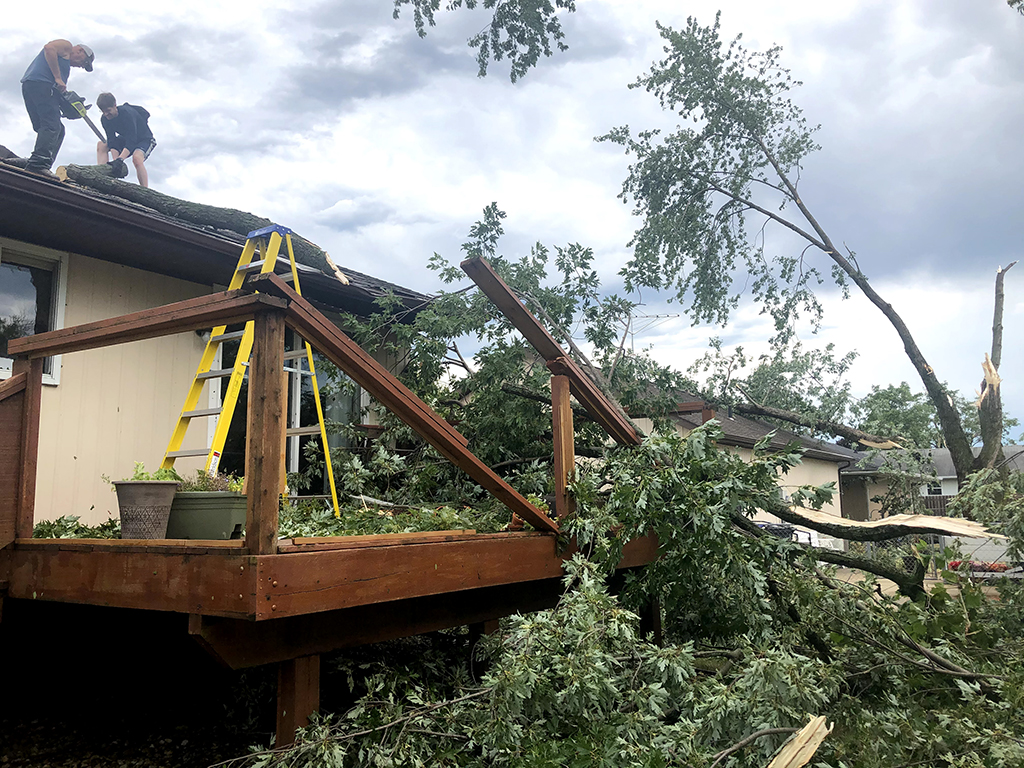 A kind neighbor with a chainsaw helped Josiah remove the large limb from our roof. Another neighbor lent us a worn tarp to put on the roof. It had holes, but was better than nothing. We put bins around inside under the dripping ceiling to catch the water. We couldn’t vacuum up glass inside because we had no power. We couldn’t open the fridge or freezer in fear we’d loose what little cold air we had in there.

After canned black beans and tomatoes for supper, it was dark so Josiah and I went to bed by candlelight. We talked about the crazy day for a half hour, then blew out the candle. A few minutes later we heard an unwanted sound. “Drip.” Then, “Drop, drip, drip.”

“Josiah, did you hear that? I think it’s dripping on our mattress,” I said.

We could tell the drip was increasing, so we got up to place a bin underneath to catch the water. We decided we should move our mattress, and we were about to do so, when the entire ceiling above our bed fell. Chunks of drywall, insulation, and ceiling crashed down onto our bed and bedroom floor.

Had we stayed in bed one minute longer, the heavy jagged drywall would have landed on us (and our almost-born baby). As it was, it merely scraped my calf as I was walking away. Had we fallen asleep, we wouldn’t have heard the drip or moved. Had our baby already been born, her little body would have been under the drywall too (her bassinet connects to our bed). We’ve been praying for the Lord to protect our baby girl and we saw Him doing this very clearly. 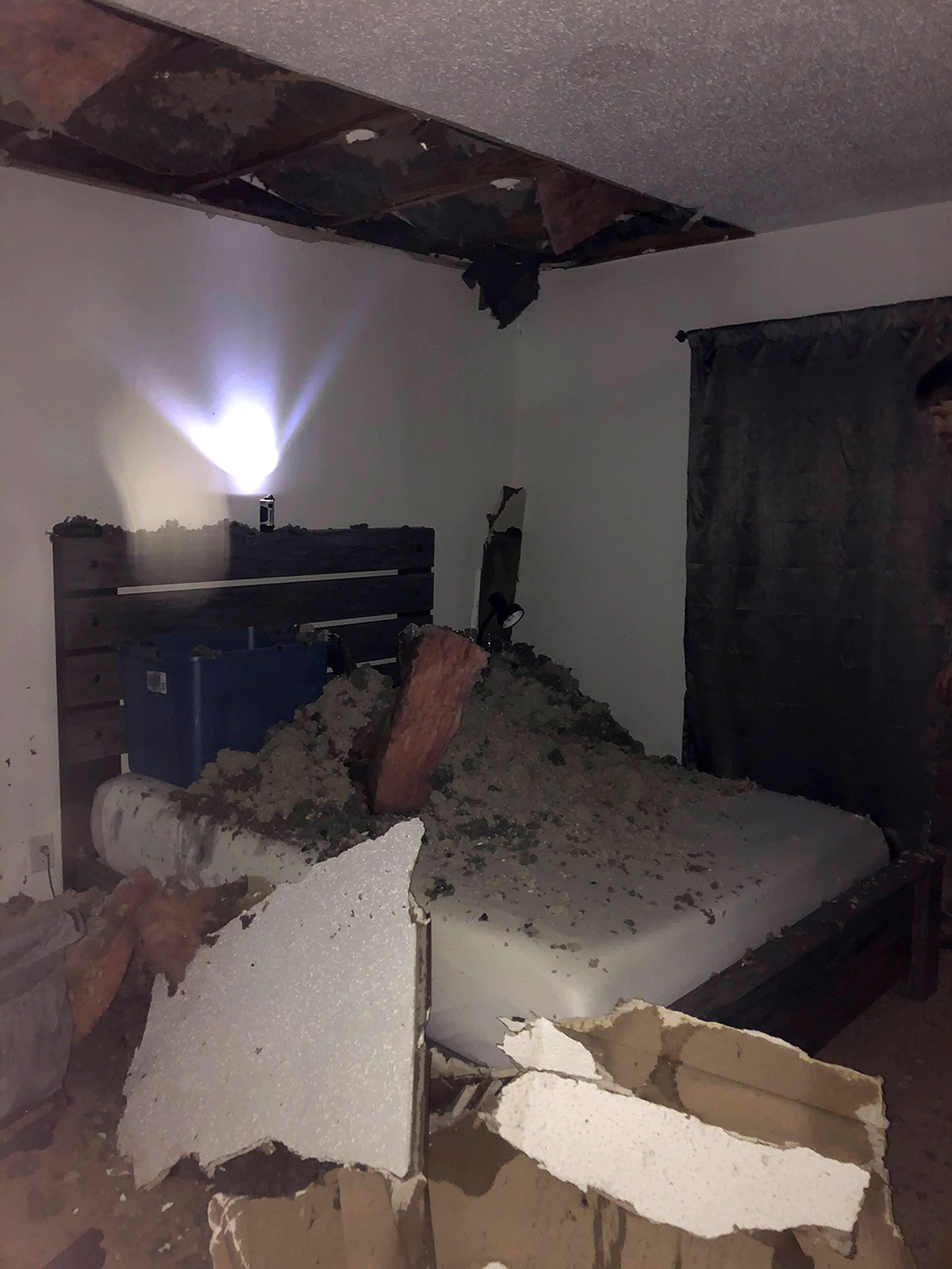 Josiah and I decided to sleep downstairs. The next morning I woke up starving and ate another can of black beans. Not only was electricity out, now cell coverage was gone also. Our house had glass covering one area and insulation and drywall covering another, neither of which we could clean up yet. Being 39 weeks pregnant, we were just thankful contractions didn’t start during the storm!

What a blessing it was to have my brother show up bringing news and some supplies for us, and then my parents shortly after, bringing more tarps to help Josiah put on the roof.

Josiah and I kept having more and more little difficulties. Would our tarps keep water out in future rainstorms? Would our kitchen ceiling cave in too (it was looking like it might!)? Did we need to evacuate completely? How can we get the help we need to fix our house when all of Cedar Rapids is in the same shape? When will we be able to vacuum our carpet? Josiah already had one piece of glass or a splinter in his foot. And how will we get our yard cleaned up with no chainsaw? How can we help our neighbors more?

Days after day was going by without power and we had no idea when it might come back.

We had been ready for the baby, but not anymore! Freezer meals for after our baby’s arrival were eaten or tossed. The bassinet with freshly washed sheets was now filled with scratchy insulation. The suitcase I had packed for the hospital was filthy. Oh well. At least we tried to be prepared! I figured. My doctor’s office’s phone lines were also down and emergency measures were being taken there too. 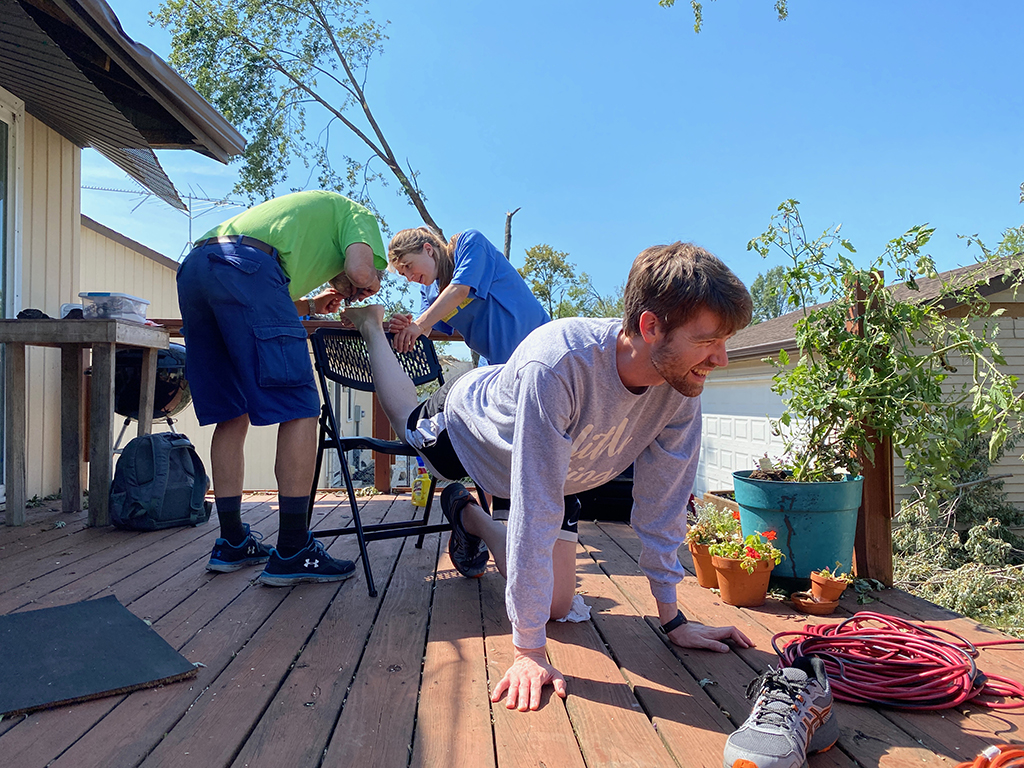 Dad and I, working on getting glass or a splinter out of Josiah’s foot

The Lord helped us so much.

A good friend who does construction came over and gave us great help and advice. Josiah and I stayed with Stephen for three nights since he had electricity at his appartemnt, 30 minutes away. What a restful oasis. 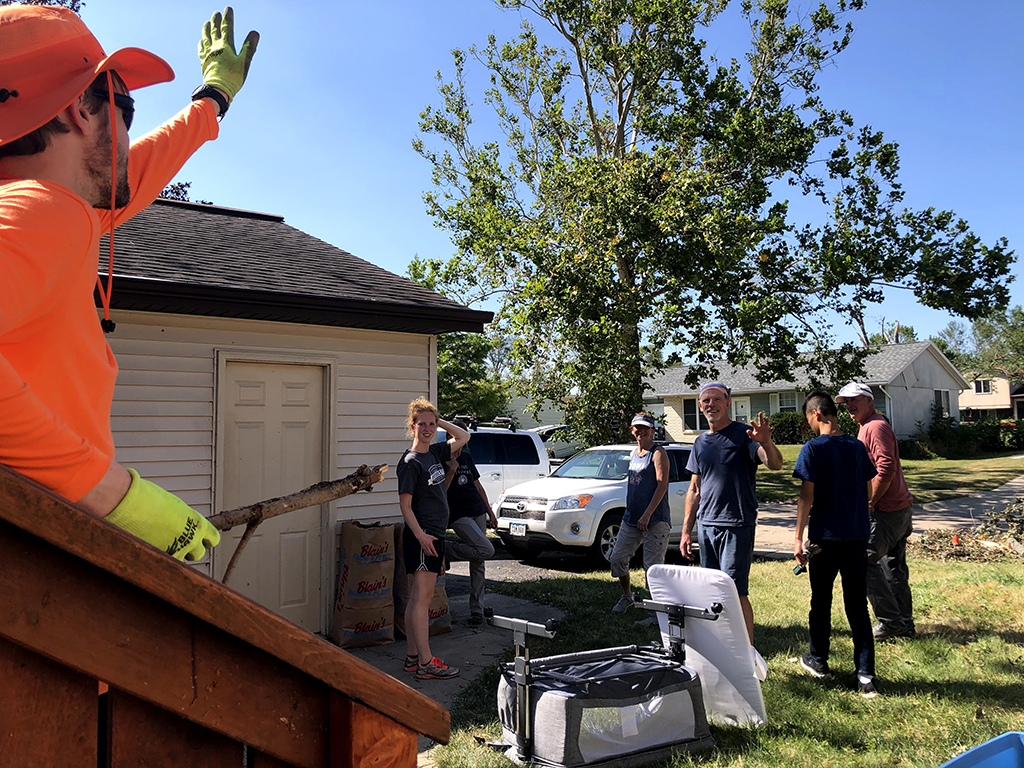 The Rathke family brought some relatives and a chainsaw over to our yard and did in 30 minutes what would have taken Josiah hours. They still didn’t have power themselves but were going out around town helping people.

Our baby still has not come, but we are getting set up for her again and we have been given a fresh glimpse of our God’s powerful protection. It’s scary to think about what could have happened when the bedroom ceiling fell and I’m reminded that no matter how hard we try, we cannot fully protect ourselves, or our baby. If there is one place that you think you should be safe, it’s in your own bed at night. Yet without the Lord’s protection, we are not even safe there. Psalm 127 says, “Unless the LORD builds the house, they labor in vain who build it; Unless the LORD guards the city, the watchman keeps awake in vain.” I am so thankful that we have a mighty Protector.

You may be wondering how the rest of my family were affected by the storm? You can read about their side of the story in this post.