Sharing the Gospel at the NEA Convention (Part 1)

We are praising God for the victories He accomplished at the NEA Convention last week. (NEA stands for National Education Association and every year public school teachers come together for this annual convention.) I thought you might be interested in a few stories. Though some were resistant and opposed to our message, many were extremely grateful and moved to the point of tears. There’s no doubt in my mind that the LORD was reaching out to individuals through those working at our booth. It was beautiful to watch. Because there is so much to report, I decided to post a “Part 1” and “Part 2.” 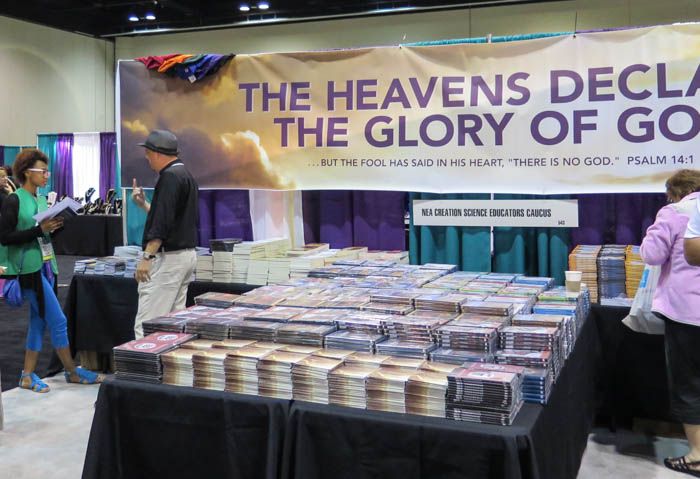 “You just blew my mind,” the girl in the green vest told Tony (in black) gratefully after he explained to her how science points to the truth of creation, not the theory evolution. But that was just the start. Next, Tony asked her about her spiritual background and led her into the gospel. (We always try to move toward the gospel and not just speak about the origins issue, because the gospel message is what contains the power!) Kayla said she was a Christian but thought she’d go to Heaven because she hadn’t sinned much. 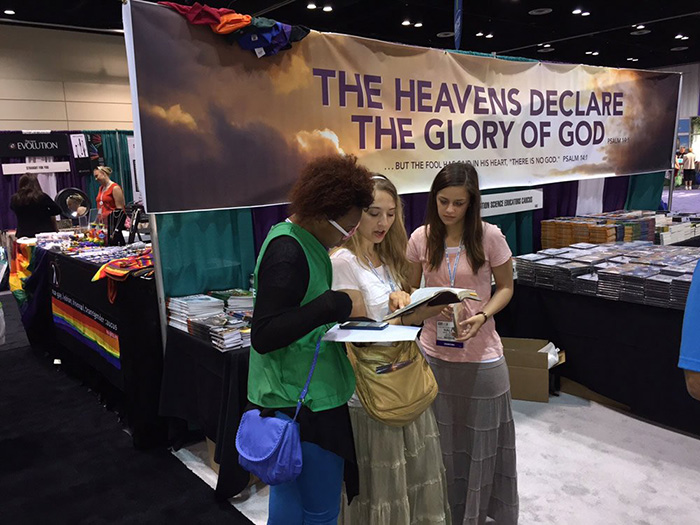 Tony turned the conversation over to Haley and me, and the next 30 minutes were spent answering her questions and showing her verses from the Bible about the problem of sin, and the solution in Christ. She was on the verge of tears as she learned more about God’s love for her and His desire for her salvation. 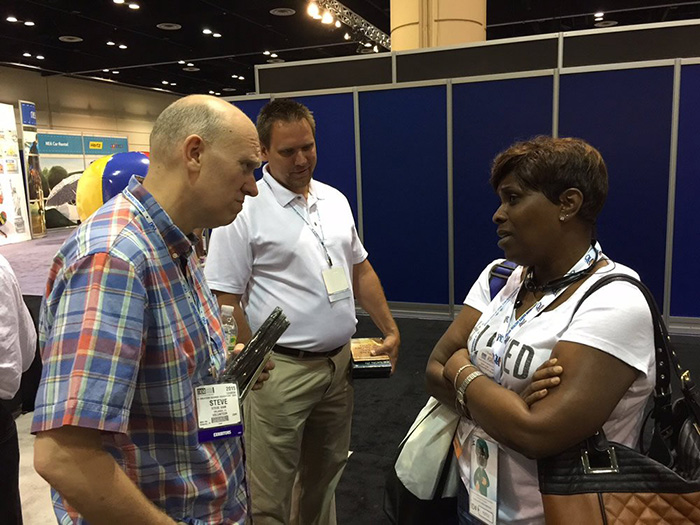 Dozens of conversations went this same way: they started with the topic of origins and transitioned to the gospel of Jesus. As Steve Ham talked with this lady, she was so touched she started crying. I was challenged as I listened in on many conversations. I was reminded of how far I have to grow in witnessing, but encouraged to see how powerfully the Lord works through His servants! 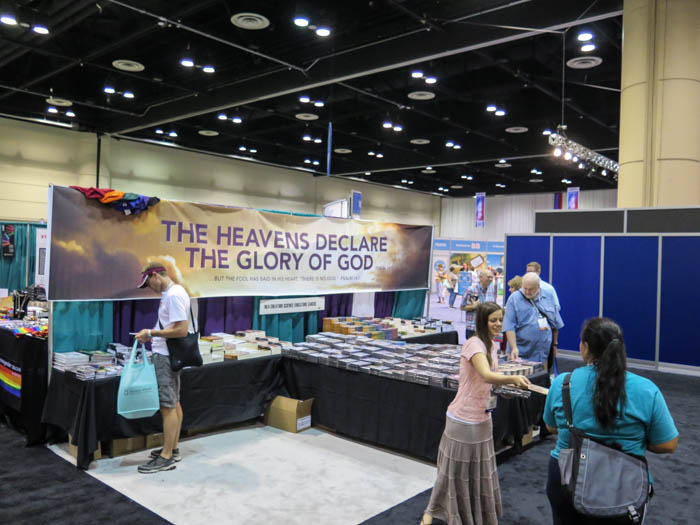 You may notice the little “rainbow” that we have in our clouds on the top left of our banner from the polo shirts hanging over the curtains. These were from the LGBT booth directly behind us. 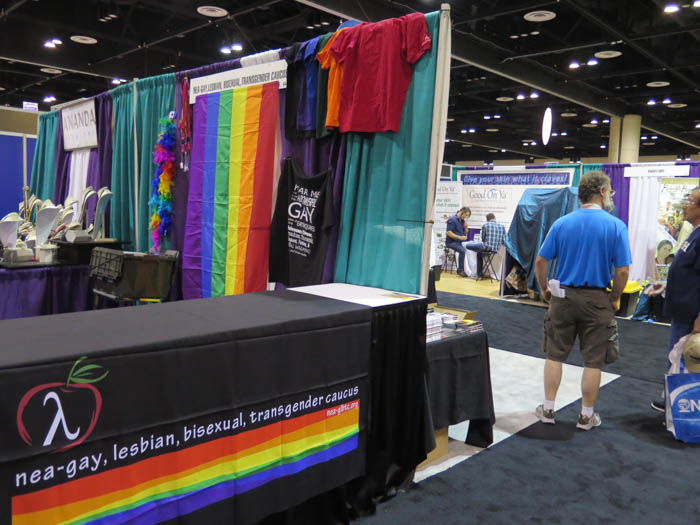 I got to know them a little bit, and appreciated their concern to be good neighbors to us. May the Lord touch their hearts and open their eyes to the truth of the gospel!

The NEA is one of the most liberal organizations that exists in America. There might be a tendency in this environment to be be cautious or quiet to avoid “ruffling feathers” in hopes that we don’t get kicked out. But we’ve chosen to not worry about that and be very clear about our purpose for being there: proclaiming the gospel.

I liked the way Tony Ramsek from Answers in Genesis (who heads up this outreach every year) put this during one of our lunch breaks. He said, “Here at the NEA I want to be as bold and loving as possible, but I’m constantly getting pressure from everywhere saying ‘you have to be careful.’ But I say, ‘You know what? God is the One sustaining us. If God wants to shut us down or allow us to be shut down, God will provide another audience.”

Tony continued, “I see this all the time: people become scared of losing their audience [and it causes them to refrain from being bold] … but I’m not at all. Because I believe God will provide the audience if we are faithful.”

See Tony’s report of the outreach on Ken Ham’s blog. 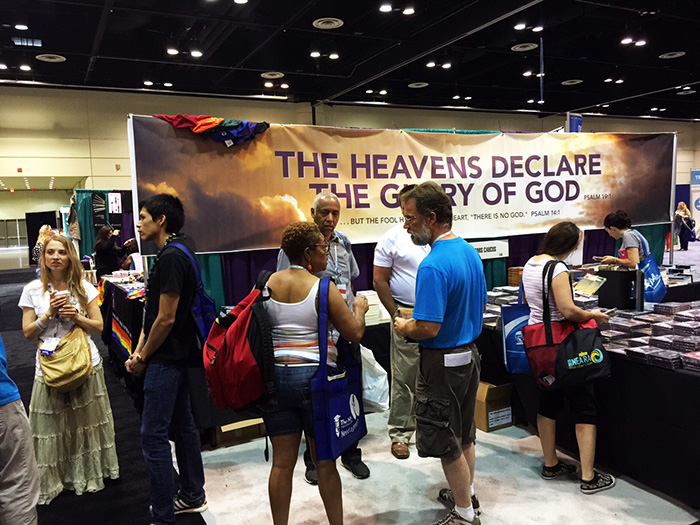 God certainly provided an audience for us last week! At our booth there were often many conversations going on simultaneously, with Scripture verses being shared all day long. It would be interesting to know how many times Ephesians 2:8-9 was quoted by someone working at our booth 🙂 . 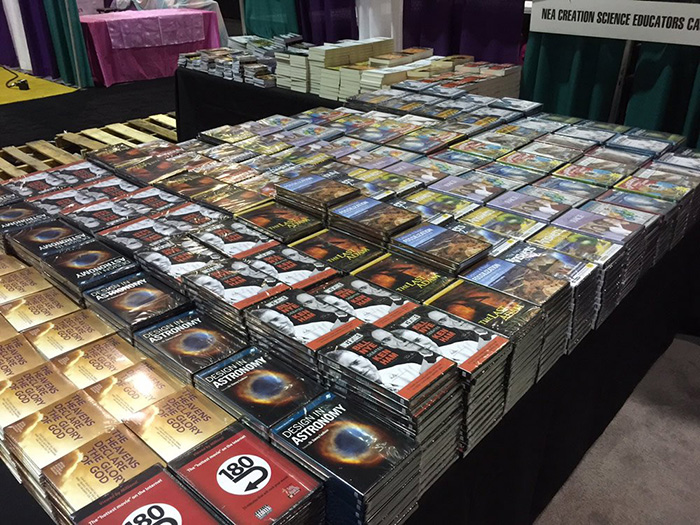 The 4,000 DVDs and 4,000 books given away were helpful spring boards to get these conversations started.

My favorite conversation was with a young Native American guy, Frank, who was searching for meaning in life.
“What is your version of the meaning of life?” he asked Haley and me.
We shared that we get meaning from our relationship with our Creator. Then Steve Ham (who thankfully joined the conversation) went deeper by explaining that our purpose is to bring God glory and WHY that is.

“A year ago, I asked this question to a whole bunch of people … ” Frank said. He explained that the common denominator he found was “connection.” He thought lots of religions could coexist and we just need to have connection to something. “Even if it’s not to God,” Frank explained, “it could be connection to yourself, to the earth, etc…”

Steve replied, “Here’s what I would ask us to consider. I believe there’s one Truth. If there is only one Truth, then there are other ideas that are actually not truth. Truth is not relative. Eight can’t equal nine. If someone is saying, “Truth in identity is for me to connect with my mind or to connect with the world, I would say ‘where do you get that truth from?’. If it’s just ‘what I believe’ then, ‘what’s your authority for believing it’? Our authority is the Word of God … which claims to be the one Truth. Jesus claims, “I am the Way, the Truth and the Life. No one comes to the Father but through Me.”

Then I was sort of blown away by how well Steve responded to Frank’s “connectivity” point. He said, “If you go back to the beginning of Scripture, to Genesis 1, when we were created in God’s image, we were told to have dominion and multiply on the earth … one major thing happened. Instead of wanting to seek God’s glory with our whole heart, humanity rebelled against God. He gave us one rule… and instead of seeking connectedness only with God, and bringing Him glory, they tried to connect with the creation and themselves. They tried to bring about their own glory. And that is the event that brought rebellion to all of humanity. So we actually see the idea of wanting to be connected to ourselves or to the world outside of Jesus Christ to be the problem, not the solution.”

This is very much in contradiction to Native American religious beliefs, but it is what Frank needed to hear!

After more discussion and explanations, Frank was out of arguments. He said to Steve, “Pretty solid right there, that’s cool. I can’t say much.”

I thought that was awesome. Here, Steve totally contradicted so much of what Frank believed in, yet Frank could tell he loved him, he could see his wisdom, and he appreciated the conversation greatly.

As the conversation was wrapping up, Steve stated, “I want you to hear this very, very carefully: We are not dissing Native American culture. When I share about Jesus, it comes out of great love for the people that I’m talking to. I love the Native American people so much I want to preach the gospel to them so that they might come to faith in Jesus.”

“Are you here tomorrow too?” Frank asked, commenting on how interesting the conversation was.

“I’d love to talk more,” Steve agreed. Then he left them with this thought: “It’s good to have discussions and say ‘they were interesting.’ But from our perspective, these discussions actually mean something. At some point it comes to whether you do or do not have faith in Jesus Christ. Which means you have to come to the point where you say, ‘I’m repenting and believing in Jesus Christ for my salvation,’ or, ‘I’m rejecting Him.’ I’d like to see you accept Christ …”

As you can see, Steve made it VERY CLEAR that it was not possible to have both “Native American religion” and “Christianity.” It was one or the other. Frank needed to hear this. Praise God He led Frank to one of His servants who was bold enough and loving enough to share the truth.

“Nor is there salvation in any other, for there is NO OTHER NAME under heaven given among men by which we must be saved (Acts 4:12).”